This strange little song has a strange history. It was one of two numbers Procol Harum recorded at Olympic Studios on 20 October 1967, which were evidently scheduled for the Shine on Brightly album. The other was the still officially-unissued Seem to Have the Blues (Most all the Time) which curiously shares with the present number a kitchen setting, an intrusive summons at the door, and some uncertainty as to whether the narrator is living or dead. Both songs are slightly ordinary R&B efforts, and lack the inspiration of most of the material on the first two albums: the quality of performance is unspectacular, and the recordings were probably shelved as In Held 'Twas in I took shape. Both tracks surfaced on the Cube's 1976 Rock Roots album, the first of a long series of studio-cellar-rummagings that has afflicted the band.

If we are to believe the liner note to Rock Roots, the present song was then called Monsieur Armand; when it was resurrected (and re-recorded with the later line-up) in 1974 for Exotic Birds and Fruit the title was punningly spelt Monsieur R Monde, and it has been speculated that this nominal distinction allowed Brooker and Reid's 'Bluebeard ' company to claim publishing royalties, although the song had been composed during the era when they were signed to the Platz organisation. This may be true [it was confirmed by Gary onstage in Croydon, 2002] though it seems not to have applied to Pandora's Box, which has a similar history of rejuvenation – and we shall use the differing spellings, in what follows, to distinguish the 1967 and 1974 versions.

Monsieur Armand was heard in concert in the USA in November 1967. Like the October recording, it started with Brooker's unsupported vocal, and raced along (the recording may have been abandoned because it speeds up so much: it starts at about 128 bpm but ends at a sprightly 132 or so: on record Monsieur R Monde stays at a disco-standard 120 throughout). It sounds a bit lightweight, and doesn't really benefit from the Skip Softly-style off-beat chops that Trower's guitar supplies. At San Francisco in November 1967 the song sprang a bluesy coda, showcasing guitar and organ momentarily (mp3 here). But despite having been apparently consigned to history in 1967, R Monde returned from the dead in 1973 / 74, being, as far as we can tell, the first instance of an old song brought out to fill a later album. It may well have edged out the the problematic The Poet / Without a Doubt, though it's possible that the late appearance of New Lamps for Old may have shared the responsibility for this. Matthew Fisher told Mike Ober (in Then Play On, 1992): 'There were various tracks recorded for the second album that seem to have turned up on some compilations, like Monsieur Armand which was re-recorded in a slightly different way for Procol's Ninth [sic]'. Certainly the texture and feel of the track are different: the rhythm section is greatly beefed up by more vigorous bass and a lot of cowbelling, and screeching vocal noise evokes the supernatural following a landlocked passage of dinning layered guitar, but it's done at the expense of tonal variety: some feel that the Chris Thomas style of overdubbed and repetitive guitar riffs does not really suit the Procol instrumental constitution, and it's certainly ironic that in a very few years he would be using exactly that dynamic to perfect the first Sex Pistols' singles and earn his place in rock history.

R Monde stays close to the architecture of its alter-ego Armand, though it starts with some new, portentous chords (and a piano motif closely related to the start of Butterfly Boys). From a ringing D, and a C, it descends into the home key of G, and stays on that chord a long time in Procol terms, going up to the C and back to G just as one would expect if it were the blues its 'morning' opening leads us to expect. But then, like so many early Brooker songs, it dodges the dominant, riffing its way to an unexpected F chord, and home again to G. It has the same few chords as Alpha, another of the waifs and strays from early Brooker/Reid days, which Gary has announced in concert as 'a five-chord blues'. R Monde faithfully reproduces the little 1967 octave-riffs that link sections, and the curious harmonies under the guitar solo, which starts in C, goes up a fourth into F, then up another into B flat, whence it makes a seamlessly surreptitious return to the home key. However R Monde breaks with the blueprint by pounding out a few empty G bars before the vocal returns, and it returns to the fourth-stepping chord-sequence after the final verse until, after a taxing slog for 18 solid bars of the home chord, Brooker's whistle finally allows it to wind up, hanging on the dominant it has so studiously skipped over since it started the whole song.

Michael Sajecki, in Shakin' Street Gazette review, opined that '… the band still knows how to rock as only they can and they prove it with Monsieur R Monde, a blisteringly-paced little tune which gives the whole band a chance to shine (pay particular notice to Grabham’s guitaring, as he has just won the Robin Trower sound-alike contest).' However many fans find the pounding, heavily-overdubbed arrangement unadventurous, and here, more than anywhere, we must agree with Claes Johansen, who memorably observes that the generous dollops of echo on this album make it sound as though Procol Harum are playing to an ominously empty hall.

Monsieur R Monde was played on the 1974 tour with Gary on rhythm guitar (while Copping migrated to the piano, Brooker would stand front centre, counting artless frets to find the opening chord, while other members of the band joshingly dubbed him 'Gary Gold', a quantum upgrade from the then-voguish Gary Glitter (Brooker actually signed himself 'Gary Gold': see here)). And the curious story of the song's survival continued when it made a return on the 1995 tour: Geoff Whitehorn negotiated a bluesy and interesting solo at Clacton 1995 (mp3 here), and Gary continued to emit hollow laughter towards the end. 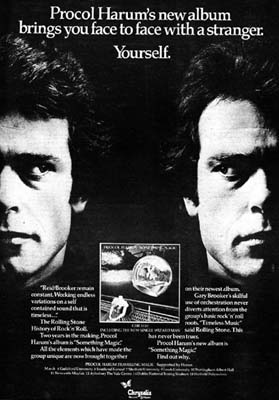