The composer, Matthew Fisher, explains the meaning of this number:
Well, I don't think it means anything, really. As you may already know, I got the idea for the chord sequence from a Four Seasons record called Beggin'. Apart from the organ introduction it was a pretty co-operative effort. Rob, in particular, added a lot with his guitar-playing. The Bach prelude was, I think, Gary's idea. We were thinking of doing the whole prelude as a separate piece but Gary suggested putting it in to break things up a bit.

How the title came about was that we were trying to decide what the mood of it was. I thought it was all very angst-ridden and hence suggested 'Repent'. Someone else (probably Gary or Keith) thought it evoked images of Walpurgis Night (demons and such). Eventually we decided to put the two together. (MF)

What Bach, who's Walpurgis?
The Bach piece referred to above is the Prelude No 1 in C major from JS Bach's 48 Preludes and Fugues, Book I. In the 1967 album's version of Repent Walpurgis the piano plays the first eleven bars faithfully; a twelfth bar in similar style has been added to the Bach; it then warps back into the main piece with a (sort of) quotation from the opening of Tchaikovsky's Piano Concerto No 1.

Walpurga was an English nun (she died in about 788 AD) who went as a missionary to Germany and became abbess of Heidenheim; she is celebrated on the first of May, which is coincidentally the date of the rites of an earlier (pagan) festival, one of the Celtic quarter-days, in fact. On the night before May Day, Walpurgisnacht, the witch-world holds its most elaborate revels particularly at The Brocken, high-point of the Harz Mountains, in the presence of the Devil. (RC)

Walpurgis by any other name
Repent Walpurgis is known to many Italian fans as Fortuna (meaning 'fate' or possibly 'good luck'), since that is the title under which it appeared as the B-side of Il Tuo Diamante (an Italian text grafted on to the music of Shine on Brightly). 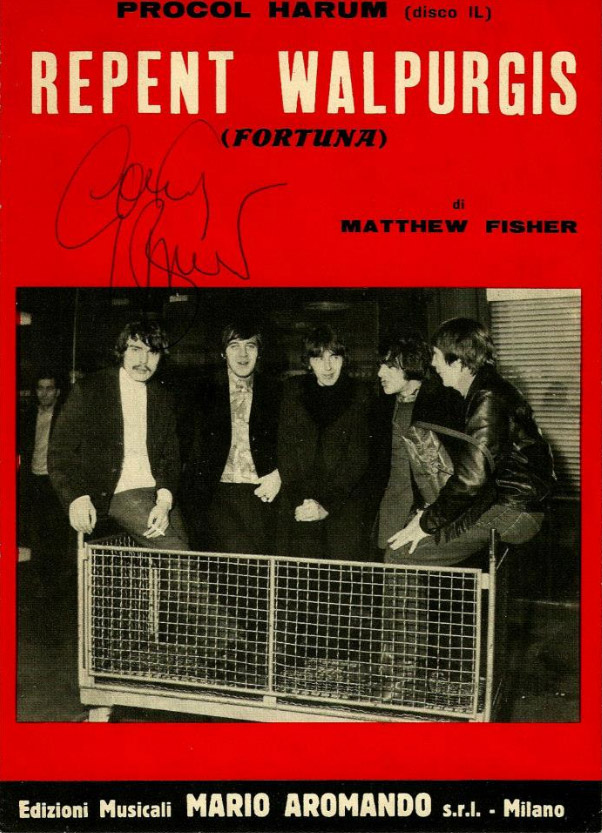 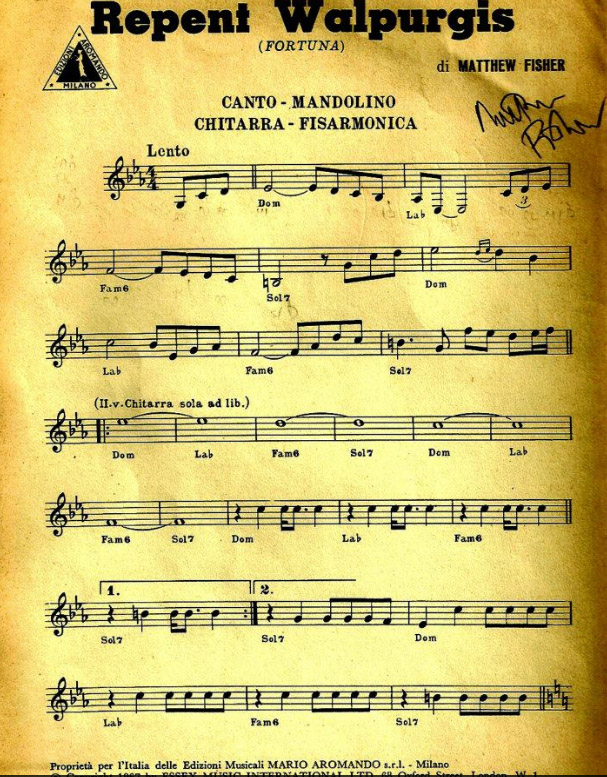 Fortuna is (on record, though not on the signed sheet-music above) credited to Dossena / Fisher, the 'collaborator' having contributed only a single Italian word to the instrumental's title! Nonetheless Dossena (he was an Italian author of words for some sixties songs, but, in my opinion, not a great name in this field) probably continues to receive a share of royalties even today from the SIAE (Societa Italiana Autori ed Editori) (ACB) (thank you for the muisic, Claudio)

Brooker, Bach, Well-Tempered Clavier ...
In October 1999 Gary Brooker mentioned to BtP that he specifically recalled inserting the Bach in the middle of RW to be a calm in the middle of the storm, to give some relief from 'the same slogging four bars over and over', and agreed that the change from minor key to major and back contributed a lot of magic to the number.

About Bach and AWSoP, he mentioned that he knew the music of Bach, in 1966 and '67, through the versions of Jacques Loussier and the Swingle Singers: and that's directly how Christianne Legrande came to be involved in 'Fires' in 1973. That too is Bach-like, in the introduction: Gary confirmed that he had been looking at the B flat Prelude, No 21, from the first book of Bach's 48 Preludes and Fugues. (RC)

What's that sound?
In the April Guitar Player 2007 magazine the topic is "The Great Guitar albums of 1967". Along with Jimi, Moby Grape, The Beatles, there's Procol Harum. There is a great photo included of the original Procol: Ray Royer and Bobby Harrison included. Of course Ray is noted as the player on AWSoP but the focus goes to Trower. Conquistador and Repent Walpurgis are described as being 'pure proto-prog'.

Trower is described as 'wrenching fuzzy blues bends into a nasty vibrato on Cerdes'. Trower told GP how he got the Procol tone:

'I played a Gretsch Chet Atkins solid body through a Selmer Little Giant. I ran a jack lead off the points of its tiny speaker into a small Fender. That way, I got some hardness from the Fender, and all my smooth distortion from overdriving the Selmer'. (thanks, Kaleidoscope Ken)

I love Repent Walpurgis (writes Yukon, February 2015) but has anyone tried to figure it out?

I mean, is it a conversation between instruments to persuade Walpurgis (represented by Geoff Whitehorn's guitar) to repent?

I think drums are time, the organ is his (her?) conscience and the piano is the persuader?

Or is it just a song?

Does this make sense to anyone?   (responses here, please)

Michael Krämer responds (november 2016) as follows
> Does this make sense to anyone?
No, it doesn't.
>Or is it just a song?
Yes, it is.
> Walpurgis (represented by Geoff Whitehorn's guitar)
Note that Whitehorn wasn't involved when this song was created.

Mott shares Bach with Walpurgis
Surprisingly for a band whose onstage antics, talent for carousing and direct approach to rock-and-roll were second only to the Faces among British peers, Mott the Hoople used the same Bach Prelude as an introduction to the song Rest in Peace on their 1974 Live album. This was taken from the 7 May 1974 concert in which Mott became the first rock band to play Broadway. The Bach intro was shared between Morgan Fisher on piano and Blue Weaver on organ. The album was released as Mott the Hoople Live - on Columbia CD No CK33282.

The PH and Mott connection is stronger, given that Mott was produced by Guy Stevens who was responsible for introducing Messrs Brooker and Reid to each other! Small world! (Peter Cullivan)

The testimony of Christian Kabitz, orchestrator of Repent Walpurgis on the Symphonic album

Walpurgis night celebrations at 'Beyond the Pale'