Not every rock group maintains its own poet-in-residence, but Procol Harum has Keith Reid. Between those record jacket parentheses that denote function, Reid's role is simply stated: "words." 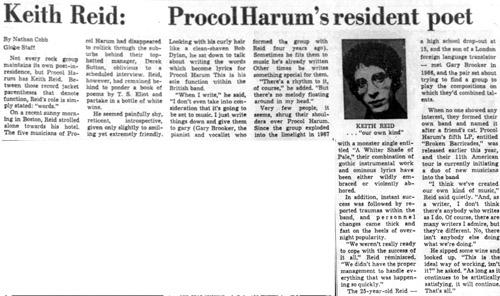 On a recent sunny morning in Boston, Reid strolled alone towards his hotel. The five musicians of Procol Harum had disappeared to rollick through the suburbs behind their top-hatted manager, Derek Sutton, oblivious to a scheduled interview. Reid, however, had remained behind to ponder a book of poems by TS Eliot and partake in a bottle of white wine.

He seemed painfully shy, reticent, introspective, given only slightly to smiling yet extremely friendly. Looking with his curly hair like a clean-shaven Bob Dylan, he sat down to talk about writing the words which become lyrics for Procol Harum. This is his sole function within the British band.

"When I write," he said, "I don't even take into consideration that it's going to be set to music. I just write things down and give them to Gary (Gary Brooker, the pianist and vocalist who formed the group with Reid four years ago). Sometimes he fits them to music he's already written. Other times he writes something special for them.

"There'a a rhythm to it, of course," he added. "But there's no melody floating around in my head."

Very few people, it seems, shrug their shoulders over Procol Harum. Since the group exploded into the limelight in 1967 with a monster single entitled A Whiter Shade of Pale, their combination of gothic instrumental work and ominous lyrics have [sic] been either wildly embraced or violently abhorred.

In addition, instant success was followed by reported traumas within the band, and personnel changes came thick and fast on the heels of overnight popularity.

"We weren't really ready to cope with the success of it all," Reid reminisced. "We didn't have the proper management to handle everything that was happening so quickly."

The 25-year-old Reid, a high school drop-out at 15, and the son of a London foreign language translator, met Gary Brooker in 1966, and the pair set about trying to find a group to play the compositions on which they'd combined talents.

When no one showed any interest, they formed their own band and named it after a friend's cat. Procol Harum's fifth LP, entitled Broken Barricades, was released earlier this year, and their 11th American tour is currently initiating a duo of new musicians into the band.

"I think we've created our own kind of music," Reid said quietly. "And, as a writer I don't think there's anybody who writes as I do. Of course, there are many writers I admire, but they're different. No, there isn't anybody else doing what we're doing."

He sipped some wine and looked up. "This is the ideal way of working, isn't it?" he asked. "As long as it continues to be artistically satisfying, it will continue. That's all."