Although British audiences seem to have misinterpreted what Procol Harum are really all about, they still sell out every home gig they perform. Reading University was one of their latest and Ray Telford was there.

Who really cares about Procol Harum?

Their audiences always seem to contain a weird mixture of theatre lovers and the same kind of degenerate characters that turn up at Kinks concerts – neither of them truthfully represent the bulk of the great British record buying public and that puts them in a unique position. 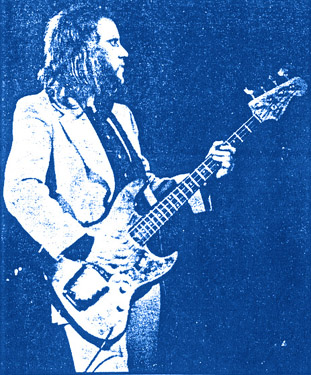 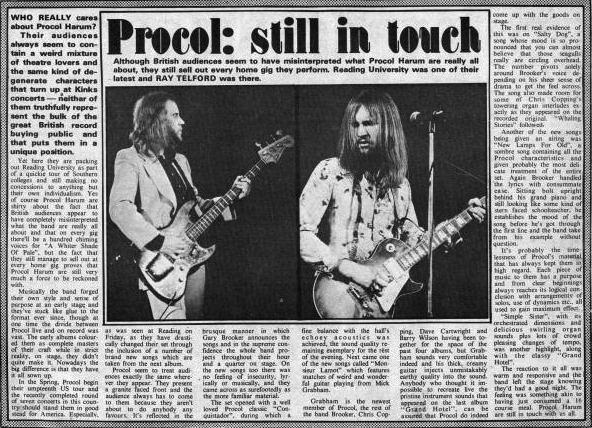 Yet here they are packing out Reading University as part of a quickie tour of Southern colleges and still making no concessions to anything but their own individualism. Yes of course Procol Harum are shirty about the fact that British audiences appear to have completely misinterpreted what the band are really all about and that on every gig there'll be a hundred chiming voices for A Whiter Shade Of Pale, but the fact that they still manage to sell out at every home gig proves that Procol Harum are still very much a force to be reckoned with.

Musically the band forged their own style and sense of purpose at an early stage and they've stuck like glue to the format ever since, though at one time the divide between Procol live and on record was vast. The early albums coloured them as complete masters of their craft while in strict reality, on stage, they didn't quite make it. Nowadays the big difference is that they have it all sown up.

In the Spring, Procol begin their umpteenth US tour and the recently-completed round of seven concerts in this country should stand them in good stead for America. Especially, as was seen at Reading on Friday, as they have drastically changed their set through the inclusion of a number of brand new songs which are taken from the next album.

Procol seem to treat audiences exactly the same wherever they appear. They present a granite-faced front and the audience always has to come to them because they aren't about to do anybody any favours. It's reflected in the brusque manner in which Gary Brooker announces the songs and in the supreme confidence the whole band projects throughout their hour and a quarter on stage. On the new songs too there was no feeling of insecurity, lyrically or musically, and they came across as surefootedly as the more familiar material.

The set opened with a well loved Procol classic Conquistador, during which a fine balance with the hall's echoey acoustics was achieved, the sound quality remaining exemplary for the rest of the evening. Next came one of the new songs called Monsieur Lamot [sic] which features snatches of weird and wonderful guitar playing from Mick Grabham.

Grabham is the newest member of Procol, the rest of the band Brooker, Chris Copping, Dave Cartwright and Barry [sic] Wilson having been together for the space of the past four albums, but Grabham sounds very comfortable indeed and his thick, creamy guitar injects unmistakably earthy quality into the sound. Anybody who thought it impossible to recreate live the pristine instrument sounds that appeared on the last album Grand Hotel, can be assured that Procol do indeed come up with the goods on stage. 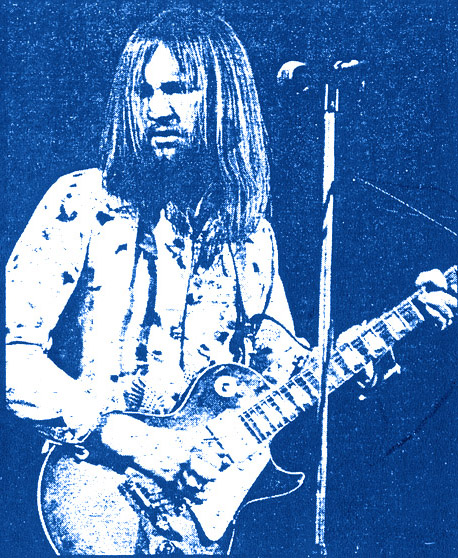 the first real evidence of this was on Salty Dog, a song whose mood is so pronounced that you can almost believe that those seagulls really are circling overhead. The number pivots solely around Brooker's voice depending on his sheer sense of drama to get the feel across. The song also made room for some of Chris Copping's towering organ interludes exactly as they appeared on the recorded original [sic!]. Whaling Stories followed.

Another of the new songs being given an airing was New Lamps For Old, a sombre song containing all the Procol characteristics and given probably the most delicate treatment of the entire set. Again Brooker handled the lyrics with consummate ease. Sitting bolt upright behind his grand piano and still looking like some kind of stern-faced schoolteacher, he establishes the mood of the song before he's got through the first line and the band take from his example without question.

It's probably the timelessness of Procol's material that has always kept them in high regard. Each piece of music to them has a purpose and from clear beginnings always reaches its logical conclusion with arrangements of solos, use of dynamics etc., all used to gain maximum effect.

Simple Sister, with its orchestrated dimensions and delicious swirling organ sounds plus lots of crowd pleasing changes of tempo, was another highlight, along with the classy Grand Hotel.

The reaction to it all was warm and responsive and the band left the stage knowing they'd had a good night. The feeling was something akin to having just consumed a 16 course meal. Procol Harum are still in touch with us all.

:
At the same date there was a review by Tony Stewart in NME of the same concert. Both failed to mention the very interesting support act: David Knights's Ruby! I wonder if David visited Procol in the dressing room... In 1992 Gary told me in Utrecht he never saw David after he left Procol.