Order from Amazon UK here or immediately from The BtP Store 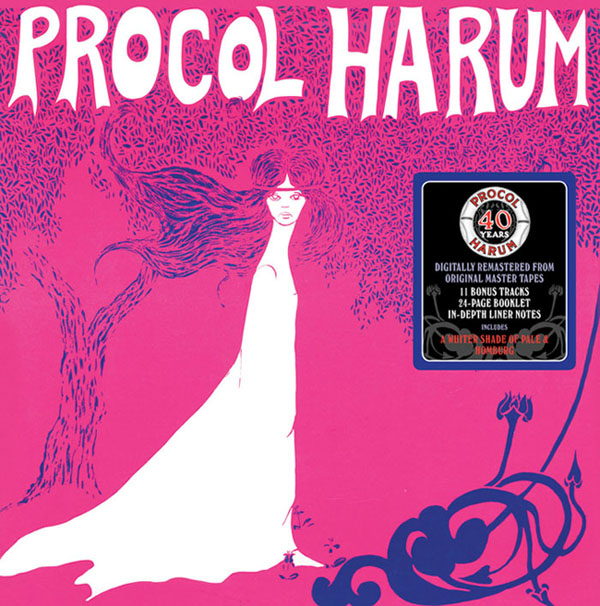 Well, the "Salvo" label expanded/remaster of Procol Harum's self-titled debut album has arrived, and here's the scoop. The quality is a mixed bag, but there's a few gems that will make it essential for completists, but there are significant questions over tape speed and sources. Again, we're not getting the definitive edition.

When the Westside label issued the album as part of the 3-CD set Procol Harum-30th Anniversary Anthology, they were working from a copy tape, but then later found the first generation mono master (in Abbey Road Studios' vaults) and used it on their CD First Album...Plus. Whether that tape went back to Abbey Road Studios after use, or remained with Westside is unknown, but clearly, Salvo has had to use an alternate source.

Whatever Salvo's source tape is, you audiophiles will be pleased that the hiss has been left intact, but it's a source tape that is audibly muddier than the tape that Westside used. And there are legitimate questions over tape speed/running time on the Salvo release. And it immediately glares at you that the opening track Conquistador is not the correct take as on the group's début album (and as on previous Cube, Repertoire & Westside CDs of the album). The alternate version that Salvo uses is a mono mix featuring the alternate organ solo, as heard on the 1971 stereo remix (and that stereo mix is heard amongst the bonus track). But even given that the mono mix Salvo presents is from that alternate take, it seems to be running fast. In fact many of the ten album tracks seem to have slightly different (faster or slower) tape speed versus the Westside CD. Specifically (and I list the Westside running time in parentheses):

As for the bonus tracks, A Whiter Shade of Pale sounds O.K, but as on any UK CD, Lime Street Blues is a dub from vinyl. My friend, music historian Greg Russo once told me that the only tape-derived CD releases of Lime Street Blues are on American A&M CD's (such as The Best of Procol Harum). This is true. I listened closely through headphones and confirmed this.

The single mix of Homburg is freer from drop-outs than the Westside releases, but not as clean overall.

Next, you get Understandably Blue, a Gary Brooker solo demo intended to be offered to Dusty Springfield. This mix combines Brooker's best piano/vocal take with Tony Visconti orchestral overdubs that were originally part of a different take. The two elements are synchronized perfectly. The song is quite un-Procol Harum-like.

Also, you get a different, previously unreleased 1967 backing track attempt at Pandora's Box. This take has more aggressive drumming and a slightly faster tempo versus the take heard on Westside's CD Pandora's Box.

The Salvo disc contains a new remix of Alpha. Unlike Westside's fake stereo release, the new remix is true stereo, though it omits Ray Royer's (out of tune) lead guitar.

The disc concludes with the three 1971 stereo remixes which debuted on the 1971 UK compilation L.P. Flyback: The Best of Procol Harum. These three stereo remixes (Homburg, She Wandered through the Garden Fence and Conquistador) are presented from a better sounding source than what was heard previously. Conquistador is free from the nasty one side drop-out during the keyboard solo which plagued previous CD & LP releases of that mix.

In closing, there are numerous reasons to buy this disc, but hold onto your Westside CD First Album ... Plus.