The Salvo reissue assessed, by the BtP team, for tape-speed 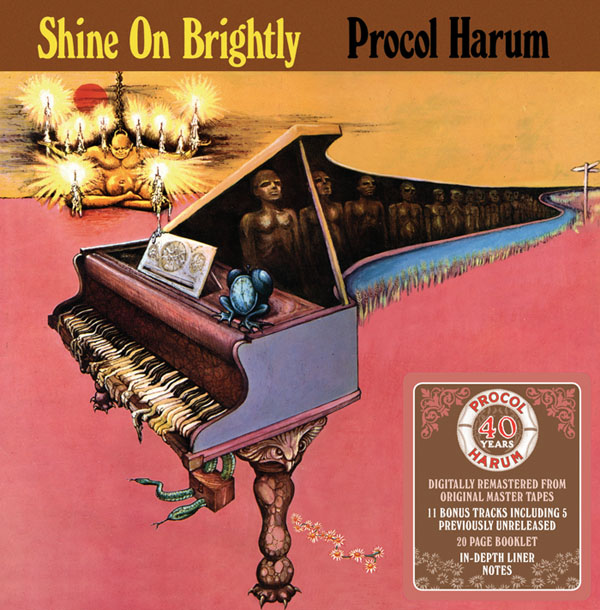 The moment you put on this excellent Salvo re-issue you're struck by the brightness of the sound, which is 'digitally remastered from original master tapes'. Several musical Procol fans have written to 'Beyond the Pale', however, to ask whether the songs are running faster than we're accustomed to. For instance Ian Hockley (a professional organist) wrote, "Have you noticed the remastered Shine on Brightly is noticeably sharper in pitch than previous incarnations? Interestingly the remastered Shine on Brightly on The Secrets of the Hive is flatter than the identical track on the new version of the parent album. It's very noticeable if you A/B them. Having an Anorak Day today!"

Phil Cohen, a correspondent of Ronan Guha at Bucks Music, declared in an American website review of the first Procol Salvo re-issue that there are 'legitimate questions over tape speed/running time', though he appeared to be trusting not his ears but a stop-watch, quoting "A Christmas Camel 4:48 (4:54), Kaleidoscope 2:53 (2:57)" etc where the timing of the Salvo reissue is compared with the parenthetical duration of the corresponding Westside Procol Harum ... plus! track, from the 1990s. Phil and Ian are, of course, not the authors of what follows:

Needless to say a stopwatch is not a reliable way of comparing the running-speed of tracks that fade, like Kaleidoscope; even with a finite-length track like A Christmas Camel the overall timing will depend on one's reflexes, or, if a CD player is relied upon, on the length of the lead-in, after the track-index, before the music starts. 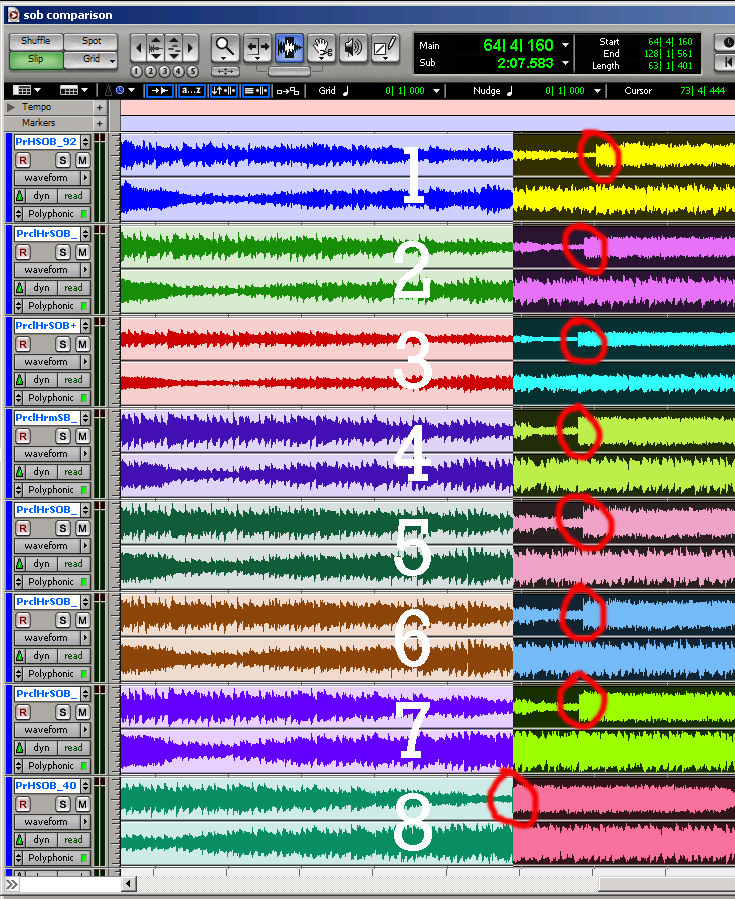 'Beyond the Pale' thought it might be interesting to compare a few different releases more carefully. We loaded eight CD versions of the song Shine on Brightly into ProTools, and trimmed the silence from the fronts of the tracks so that they all started at precisely the same time. In the horrible ensuing din (click here for 256 kbps mp3), phase effects caused by differing pitch and speed rapidly build up. Listen how – despite starting exactly together – these eight tracks diverge over the first few bars ('measures') until Gary Brooker's voice makes a staggered entry. By the time Matthew Fisher's brilliant organ solo is reaching its climax, the asynchrony is comically unbearable (click here for 256 kbps mp3).

A screenshot from ProTools (left) makes it clear just how discrepant the speeds of these tracks are. Each coloured lateral band represents the Shine on Brightly waveform (two waveforms per track, as it's stereo), and time moves across from left to right. The sources of the tracks are, in descending order,

3 Homburg and other Hats, 1995, Castle Communications

The highlighted section, to the right of the diagram (it shows up dark) marks the moment when the guitar riff comes in after the organ solo in the Salvo 2009 release, track 8. Red circles on each of the other tracks show the sudden rise in volume as the guitar sounds. The guitar re-entry on the 2009 Salvo release is a good four seconds ahead of the others, and this is only about the middle of the song! By the end, when Gary Brooker utters the third 'ha!' in the fade-out, track 8 is seven seconds shorter than track 1. But track 8 is not the only anomalous specimen: notice that, for instance, tracks one and two are also running at different speeds.

Another point of interest is the amplitude of the waveforms: the thicker the spiky line, the louder the music: compare, for example, the volume of tracks 3 and 7: it's not just speed, but volume that vary ... reflecting different decisions made in the mastering process, and, perhaps, different generations of source material used in the process.

Regarding speed; in the 'old days' of analogue recording, speed and pitch were related: if you varispeeded a track to make it shorter, by running the tape through the machine faster, the pitch would become higher by the same percentage increment. Nowadays, in the digital realm, speed and pitch can be controlled independently. So how do these tracks compare in pitch? Click here  (256 kbps mp3).to compare the eight tracks, the opening two bars of each version unrelentingly concatenated as shown in the diagram below. 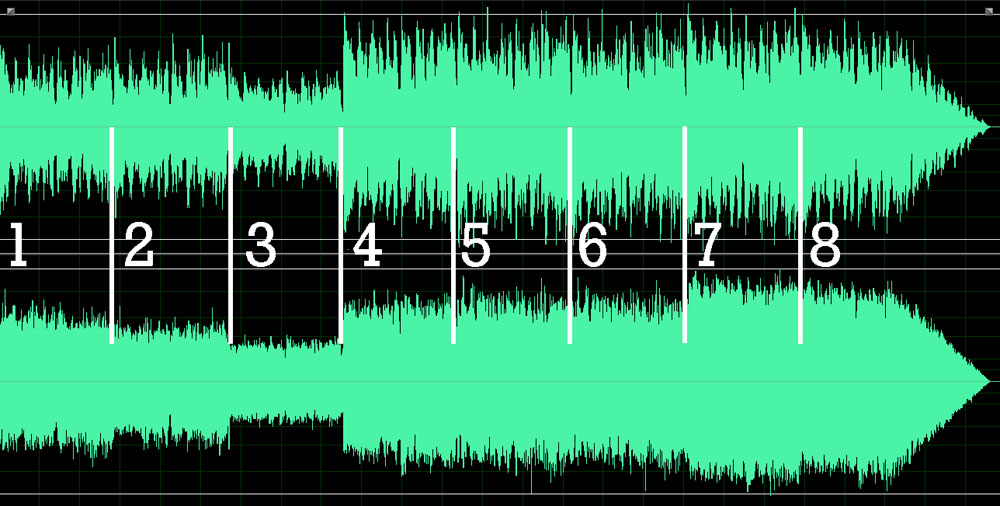 Variations in 'depth' of sound are very audible – in general, as we progress through time the clarity and definition of the music increases – but variations in pitch are clear also even to the untrained ear. The last section, the 2009 Salvo reissue, sounds so much sharper than the rest it's almost like a key-change. The second diagram, right, shows what you're listening to when you click here. Of course, you're listening to an mp3, which compresses the music quality, so BtP doesn't suggest you're hearing how good the Salvo re-mastering really is. But you can hear the relative quality of the eight versions as this clip plays. [We're mindful of the e-pundit who proclaimed that Secrets of the Hive didn't sound any better than previous re-issues, the evidence apparently being a torrent download, its sound compressed and compromised. If you want to hear and judge these re-releases properly, you absolutely need to hear the actual CDs].

So the 2009 Salvo re-release sounds heaps better than the rest, but it's apparently running both sharp and fast. The fact that it's not merely fast, or merely sharp, suggests that this discrepancy originates at the analogue stage, not in subsequent digital manipulation – when pitch and speed could have been adjusted independently. In short, the 2009 re-issue must have been based on a tape running faster than the rest.

So which is right? The current reissue might be correct, and all the others to varying degrees flat  in pitch. BtP spoke to the very helpful Chas Chandler and Salvo Records, who said that the 2009 reissue was the first one to be remastered from the original tapes (which might explain why it's not at the same pitch/speed as 2007's Secrets of the Hive version, which originates from the same company. Chas was aware of the perceived discrepancy and quoted remastering expert Rob Keyloch as commenting that Sixties' cutting engineers were wont to adjust the speed of a track to get it sounding the way they wanted it ... which BtP feels sure can't have been popular with the artists! So on the basis of Chas's remarks, we might conclude that Salvo have at last got the pitch right, and everyone before has been adrift.

But finally ... from looking over Gary Brooker's shoulder, live and on film, one knows that Shine on Brightly begins on a B flat chord, the right-hand (and the guitar) hammering out an F note. The recorded track is somewhat too 'busy' to give a very accurate reading in Adobe Audition's 'Frequency Analysis' window, but simply playing along on a guitar requires one to tune the string at least a quarter-tone up, approaching F#. So unless Procol originally recorded the song on a highly-strung piano, and somehow got a Hammond organ to run at a correspondingly high pitch, the balance of evidence seems to suggest that, for whatever reason, the Salvo 2009 disc represents a tape that was running fast.

Does this compromise listening enjoyment? It does not: the remastering is so exciting in other ways, full of detail and nuance, that the disc is indispensable. It will doubtless remain one more of those minor mysteries that afflict the story of Procol Harum.

Phil Cohen adds:
Because Fly's mastering studio was (presumably) playing all of these master tapes on the same tape deck ... and there seems to be no speed error on any of the bonus tracks, it would seem that the original 2-track tape deck that the Shine on Brightly album was mixed to was running slow, resulting in fast/sharp playback when the tapes were played on other decks. My guess is that, (in the 1960s) this was corrected in the mastering stage during the making of copy tapes, but that no one made any note on the original master tape boxes of the need to correct the speed, because it was assumed that all releases would be taken from pitch-corrected safety copies.

Missing a bell? Read this article