Liner note by Roland from BtP

MMX was an exotic and fruitful year for Procol Harum, whose shows were warmly received in Canada, Estonia, Finland, Germany, Italy, Poland, the UK and the USA. Playing concerts or festivals, headlining or sharing the bill, as a five-piece band or with choral/symphonic enhancement, Procol’s vitality and integrity make an immediate, indelible connection with any audience. 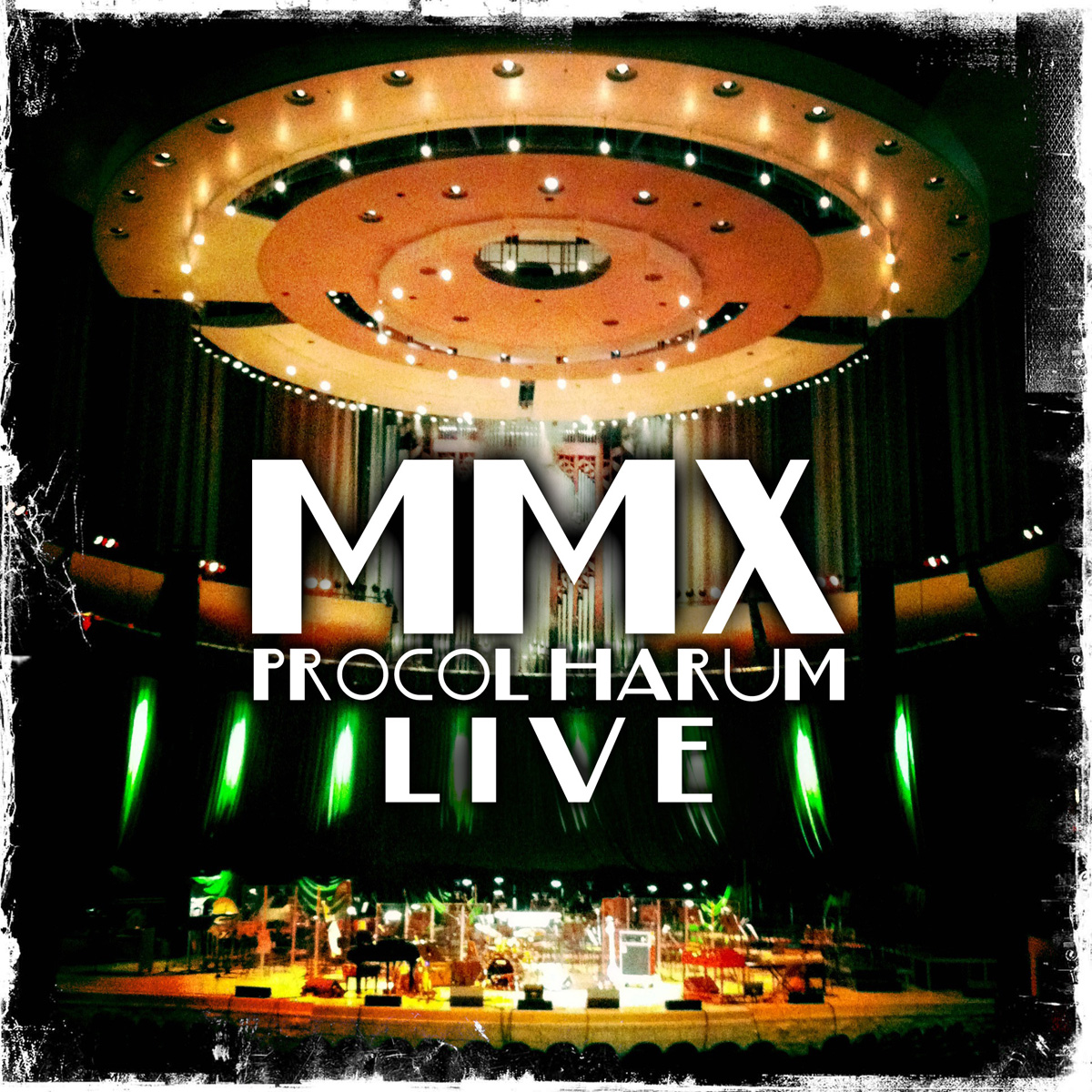 MMX is also the name of the third download-only live album from Procol’s present, powerful line-up, which débuted in October 2006. By the end of 2012’s summer tour – launched alongside this album – this fine ensemble will be on the verge of its hundredth show together.

All the band’s studio albums, right back to 1967, provide live-concert repertoire, and collectively the three download collections (all available at 320 kBps from ‘Beyond the Pale’, www.procolharum.com) showcase thirty-seven Procol Harum numbers; just two get more than a single airing. MMX, packed with fifteen songs, offers as much music as a full-length Procol Harum set: as much variety, surprise and humour. And uniquely it presents three new Brooker/Reid songs, unreleased in any previous form.

MMX opens and closes, however, with Copenhagen performances from the thin end of MMXI. Barnyard Story, already elaborated with its instrumental break and Chopin fragment, is now complemented by a rich syrup of strings from the DR UnderholdningsOrkestret, while the DR Vocal Ensemble joins battle with Geoff Whitehorn’s lead guitar.

The delicately glittering Broken Barricades, with its extended coda of growling guitar, overdriven Hammond and clattering drums, comes to a pleasingly-informal ending. Then a stately piano signature introduces the shape-shifting As Strong as Samson, presently sailing close to its original template: Matt Pegg’s bass takes a BJ Wilsonesque rôle, supplying unexpected fills, while Gary Brooker’s spontaneous re-phrasing of ‘the war for the end of the world’ hints at a poignant optimism. Riding The Blink of an Eye’s slow wave of piano and organ, his curious vocal variant suggests that the 9/11 attack ‘pulled the plug from under our feet’.

A second mighty number from the classic Exotic Birds and Fruit album, The Idol still incorporates 1974’s scalar guitar/organ counterpoints. Then Procol have fun expanding the Hawaiian horizons of Robert's Box, with a suitably seaside-flavoured Hammond verse from the consistently inventive Josh Phillips. The start of A Dream in Ev'ry Home may startle listeners unaccustomed to the band’s versatility in concert; a canny new cadence between two choruses reminds us that no Procol arrangement is written in stone. Home, the 1970 Harum masterpiece, provides the sinister Piggy Pig Pig, in which ‘every cancered spectre’ sidles in as a spoken aside.

A cinematic synth-motif heralds the daringly-sparse yet intricate textures of Strangers in Space: listen for the soulful and fluid bass of Matt Pegg, and the vocal/lead-guitar interplay at the end of this superb performance. The ghost of James Brown (circa 1970) makes its first, unscheduled, appearance, providing an interlude before the first new song. Evolved on the road, glimpsed fleetingly during sound-checks, Sister Mary is unveiled in its full mystery for the first time, its unpredictable harmonies and sprawling structure underpinned by Geoff Dunn’s sparkling, dynamic drums; Geoff Whitehorn’s high back-up vocal is also notable. Whoever called out for A Christmas Camel during this sensational ‘American Medley’ (available only to customers who download the entire album) was treated to an equally-anguished tale of love gone adrift.

We venture back to Paramounts-era directness for the second all-new Procol love-song, the raucous, taboo-busting Yours if You Want Me, marked by musical and verbal wit as Keith Reid reminds us (unnecessarily!) that ‘my humour’s dark’. These hitherto-unrecorded numbers capitalise memorably on the great jamming empathy of this line-up, and the players’ exceptional chops.

The vigorous Toujours l'Amour is played by the 1973 book, and A Whiter Shade of Pale will also please any traditionalist fans of finely-nuanced Hammonding. Yet it also offers plenty for the collector (or iconoclast) in the unprecedented shape of a guitar-solo between the two sung verses. A ‘wonderful audience’ duly acknowledges the outstanding vocal performance.

The two new songs thus far – one moody, one rowdy – represent opposite poles of the Harum oeuvre: yet in the ranting, riffing War Is Not Healthy we visit some kind of third pole, remote from any other point in the canon. Brooker raps out Reid’s pacifist polemic (‘praising the troops and waving the flag / widows and orphans carrying the bag’, extrapolated from Lorraine Schneider’s iconic 1966 anti-Vietnam War poster) with the same passion he brought to its prophetic début, in the Netherlands, on the very eve of the Iraq War.

Procol Harum travel with a JoeCo BlackBox 24-track digital recorder, and all the MMX music was captured by Procol’s perennial sound engineer, Graham Ewins. The band’s manager, Chris Cooke, assembled and compiled the raw recordings, which were then mixed by the celebrated American producer Dennis Weinreich (with his assistant Nuno Fernandes); Dennis’s sonic CV includes work with Supertramp, Jeff Beck, Jack Bruce, Queen, Michael Jackson and Richard Thompson. This collection’s orchestrated bookends were originally mixed by Lars C Bruun at Danish Radio: the whole album was then produced and mastered by Dennis, with ‘a lot of interference’ from Chris.

And what better way to end the whole show than the symphonic Grand Finale? The decorous Haydn-based minuet first grows its silvery piano counterpoint, then female voices and distant calls from the brass – before Whitehorn’s guitar, wielded like a chainsaw in a cherry-grove, prepares the way for a majestic choral/orchestral/rock’n’roll climax. This is the spirit of Procol incarnate, and the ensuing explosion of audience appreciation speaks for itself.

Tracks available through 'Beyond the Pale' are encoded at 320 mbps; this is twice the bitrate of standard iTunes downloads. There will be no physical CD of this live set: the download is the only version.