Reviewed at Progarchives by Ken Levine

(Four stars out of five) It is strange and somewhat unfair that I have taken 3 years and 640 reviews to finally discuss the first album to lead me from the ephemeral pleasure of pop music to the cradle-to-grave rewards of progressive rock. I suppose there are many reasons for this, some of which could only be extricated by minimally reimbursed visits to the therapist's couch, but I could mention that dysfunctional belief that I have simply moved on, like any wayward teenager, to more sophisticated sounds. None of the reasons could take away from my assertion that A Whiter Shade of Pale was an astonishing début, made even more remarkable by the by-now legendary back story that the whole album was hastily assembled to take advantage of the sure hit status of its opening track. (The reviewer refers to the trans-Atlantic version of the album, which did include the first hit single) 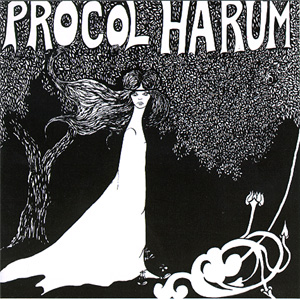 Back in 1974, my older brother was much enamoured of the work of one Robin Trower, a guitarist himself much enamoured of Jimi Hendrix. At one point the full orchestral version of Conquistador graced our local FM channel and he casually mentioned that Trower was the guitarist, which turned out to be false. The next moment a muzak version of A Whiter Shade of Pale was used on the television station's interlude which also featured a crystalline scene of winter in Montreal. The melody is so grand that it even succeeds as elevator music. When I wandered for the first time into the LP section of the local record shop, I emerged with this disk, already repackaged to underscore that it included the 'original' version of Conquistador. It turned out that poor Robin missed out on both of the group's world wide hits, as he only took over from Rob [sic] Royer for the shotgun recording of the remaining nine tracks.

While this rendition of Conquistador seems shrivelled when compared to the 1972 hit, it came first, and is still a faithful ode to these bold men of the past. Matthew Fisher's organ solo, albeit brief, actually covers more ground than the later one by Chris Copping. From there it's unknown territory for the neophyte, and what we discover is a rich organ and piano based sound with hints of R&B and classical music, and lyrics that range from narrative with commentary to absurdity. The tempo is slow more often than not, but punctuated with ditties often enough to sidestep sameness.

At the time I remember likening them to The Band, without realising that they burst on to the scene a year earlier. Particularly in songs like the bittersweet Salad Days and even Good Captain Clack, they conjured up the conflicts and the levity of The Night they Drove Old Dixie Down and Rag Mama Rag. If nothing else, Gary Brooker sounded like Levon Helm. Then of course there is the cheesy glitter rock of Kaleidoscope which I only mention because a group called the Rolling Stones seems to have been rather inspired by it in a 1968 song called Jumping Jack Flash.

If you don't want to start your exploration of Procol Harum with one of the many compilations available, I recommend their début, as subsequent works pale.