One Eye to the Future

One Scribe on the Future – Ian Hockley for BtP

I have always liked live albums. Much as there have been great studio albums by so many artists and ensembles (I can’t really imagine life without Miles Davis’s A Kind of Blue, Beecham’s recording of the Symphonie Fantastique or our own beloved Procol Harum’s Grand Hotel), for me music has always been about, and will remain essentially, a live experience. I once heard Greg Lake of Emerson Lake and Palmer say in an interview that “albums are like bank cheques”: they were not the money, it was a promise to deliver later in concert. I have always thought that was a rather good analogy and as the music industry turns full circle and the gramophone record passes into history and will be seen ultimately as spanning the history of the twentieth century, there is nowadays more money to be had for artists in touring than recording. And it is the artists that can cut it live that are going to be the ones that survive. As record stores and recording studios close down at an alarming rate, fortunately there are still places for musicians to play, certainly in Europe, if not so many of them in the UK, and audiences willing to come and pay good money to listen. Consequently a new Procol Harum live set is something to be thankful for, and all credit to the band and management for grasping the new technology and making it available through Beyond the Pale before it reached the wider world. 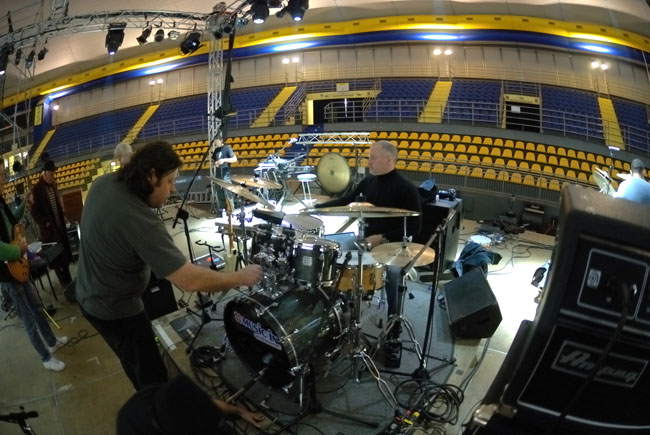 Like many other visitors to this website I downloaded this new live set the day it entered the public domain. The trials of Click and Buy have been well documented elsewhere: perhaps it’s kind to say that this relatively new technology and means of purveying music is still in its infancy and will improve over time. That said, it still took me about six hours spread over three days to actually get all the music on to my computer; one reflects that a phone call to London and a courier service from there to the Arabian peninsula would have resulted in faster delivery of a physical product! That has got the main grumble out of the way; and there are many positives with the new recording. A little bit of playing around with the computer, even for a technological Luddite like myself, has provided me with a smart little 2CD package using the artwork supplied at BtP, with the burgundy sleeve liner looking classy and attractive. I have been driving around listening to this new live set in the car over the past few weeks and here are a few considered reflections.

Generally, this set would be an excellent companion piece to The Secrets of the Hive double (mostly) studio set compilation for those who don’t know the band too well and would like a good live recording of Procol Harum in 2007, with the present line-up. My only other really negative point, apart from Click and Buy, is that much of the material is duplicated elsewhere on other live recordings and there are only five tracks, out of the grand tally of seventeen, which make their official live début. Still, not everyone buys everything, and for the more casual fan that doesn’t have everything it’s a great package.

OK, those minor caveats aside, a very positive aspect is the sound quality of this recording, which is absolutely superb, and the higher quality encoding sets it apart from much else that is available. I have downloaded it on to 2 CDs which form neat halves, Grand Hotel closing Act One and One Eye on the Future opening Act Two, and they sound very dynamic and thundrous when necessary. I wonder whether any enterprising specialist vinyl merchants will ever produce virgin vinyl pressings of download-only recordings? I guess it is still early days.

Most of the album has been pulled from a live concert in Turin, Italy on 29 November 2007, with the rest of the tracks mopped up from the following night in Schio. The band are at the top of their game here: like a well-oiled machine the five main protagonists lock together with a consummate ease and the playing is very slick. New boy Geoff Dunn fits like a glove on drums, with his propensity for playing just slightly ahead of the beat propelling the band onwards. Gary’s voice sounds a bit strained in places – it was at the end of a tour but no matter – much better to have true-to-life documentation of how it happened on the night and I can’t hear evidence of post-gig fixing anywhere. The odd fluff in the lead vocal department lyrically certainly testifies to this. The sound quality is extremely clear; one doesn’t really get the feeling of being at a concert; tracks are separated from each other, audience noise is minimal and Gary’s lively onstage patter is mostly excised. Plugged straight into the mixing desk the five musicians are all very clear, laid bare and every detail of the recording is open to scrutiny. The material could arguably sometimes do with a bit more echo, the dry-sounding piano chords at the head of One Eye… are a good example and the digital Hammond B3 sounds just a bit glassy and thin towards the lower end of its range. It is certainly the pipe organist in me that likes a halo of sound around every note, but the music should be able to stand up to such close under-the-microscope scrutiny as well as bouncing around a more reverberant space – and it does. Sonically this is a very different prospect from the Union Chapel DVD–CD package but equally valid and interesting. 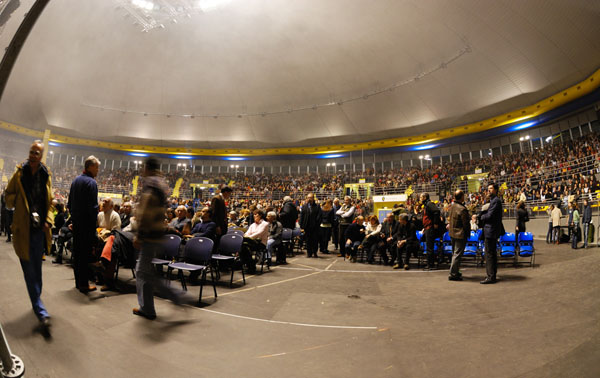 And so to the actual music.  Bringing Home the Bacon starts proceedings off, almost inevitably, and the song is tailor-made as a concert opener, ideal for getting a sound balance at the desk with harmonic holes in the song allowing space for the little solos to shine through. Part of the fun of listening to this song in concert is wondering which musical vignettes will fill those gaps: on this occasion we get the riff from Smoke on the Water and some harmonically skewed chords from TV Ceasar which somehow Gary makes fit. Shine on Brightly has a few lines in Italian, appropriately enough. Every time I hear Pandora’s Box it seems an ever stranger and brilliant song to me. As a rock song it is almost impossible to classify: it is predominantly based in a minor key, has an unusual chord sequence and seems to lend itself to a bewildering variety of treatments. As evidenced here, there are whiffs of Latin America about it and the closing jam veers off into almost acid jazz territory; some great Hammond playing here. Learn to Fly is another rarely-played song;  it’s nice to have it, but I heard the band play this in Warsaw in 2001 and for my money it was then was one of the best live Procol songs I had ever heard, played full-tilt, with thundrous drumming from Mark Brzezicki and a phenomenally-good piano solo from Gary, completely different to what is on the original recording. This song is one that needs a big acoustic; the version here is a bit polite, and one example of where I prefer Brzezicki’s drumming of it live. It really does need to fly. The following track is (You Can’t) Turn Back the Page and is just right; ruminative, understated and with light and airy backing vocals from Matt Pegg which hit the mark exactly right. Once again, it illustrates how well The Prodigal Stranger tracks stand up in a live arena and the hidden potential that was smothered away by that album’s massive over-production.

Some of the other tracks, the usual suspects, Homburg, Simple Sister, Conquistador, Grand Hotel are given solid readings in familiar arrangements without doing anything unexpected or exceptional. Another highlight is A Rum Tale making its official live recorded début. I have always thought there was rather more to this song than the ¾ omm-cha-cha rhythm it could be tempting to fall into, and the lilting waltz rhythm is perfectly judged, sensitively played and sung. The other nugget in the set is of course the first appearance anywhere officially of One Eye on the Future. A much-loved live song with a hazy history, it is very listenable and direct. Lined up against the rest of the material you can hear how unlike a Procol Harum song it really is, which perhaps explains why it never made it on to vinyl in the 1970s. The chords are straightforward, the lyrics are easy and direct, although the range of the vocal part is quite wide – an enjoyable song and one that certainly hasn’t dated. Worried Life Blues is the other new song, a cover of a standard by Blues Maceo Merriweather, and it sounds like one of the Brooker surprises he pulls out of the hat every now and then to keep the band on their toes; there’s some nice playing on it from Josh Philips and inevitably the PH treatment enhances what is a fairly ordinary old wartime blues number.

Procol management gave a very thoughtful response to another review of this new package lately; everything is subjective and one must be mindful of the sheer logistics of touring these days and how physically demanding it can be, on stage and off. All the more reason to be thankful that this wonderful band still want to do it. The whole band do themselves proud on this set, but invidiously I will single out Mr Pegg’s contributions to this set as being outstanding: his bass playing is immaculate, sounds tight and tasteful, and his backing vocals on a few tracks are nicely understated.

2009 should be a good year for Procol Harum, Gary having understandably taken a year off in 2008: there is the orchestral DVD from Denmark to look forward to and, let's hope, the band's life blood – and that of all musicians – some live performances.