One Eye to the Future

It is actually a very good live Procol recording. In general, I have no problems with the band members Gary has selected for the various incarnations of Procol Harum. (My only exception to that has been Mark Brzezicki, who I feel really fluctuated between 'below average' to 'above average' on various occasions. However, since Mark always had to fight the 'BJ Wilson backlash syndrome', I'll cut him some slack here. And yes, I know that Mark B. is not the drummer on this particular recording.) 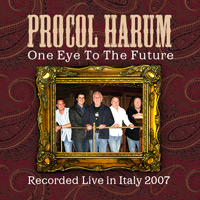 So, in general, I feel that this latest PH incarnation, like all other incarnations, do an admirable job on the PH material. It is a very good band performing some really good songs.

Having said that, my exceptions are noted below:

1. Having to use Click and Buy to purchase this download was a complete joke. The idiots at Click and Buy have no idea how to run an online store. To purchase the download, they required that I register with them and open an account. They then required my birth date (why?) and home phone number (why?), both of which I gave as fake. Despite all of that, I somehow managed to successfully purchase and download the recording. The idiots at Click and Buy later sent me an e-mail saying I had to 'verify my account' and gave me some absolutely ridiculous and convoluted procedure for doing so. I e-mailed them back and said 'Thanks, but no thanks – please just cancel my account.' I certainly hope the powers that be within PH will reconsider their use of Click and Buy in the future.

2. Gary's voice is a bit strained. They really need to not record these live shows at or near the end of a tour. Same problem with the Union Chapel DVD. In 2003, I saw them at the beginning of the second US tour in Scottsdale, Arizona, and Gary sounded fantastic. On Union Chapel, at the end of the UK tour that year, his voice was very hoarse.

3. Gary's decision to jack around with some of the arrangements. Sometimes he changes his vocal phrasings to be not nearly as good as the original recordings. I don't know why.

4. Gary's flubbing of the lyrics. Actually not too bad this time, except for A Rum Tale: 'She's fuddled my fancy and fuddled [instead of muddled] me good.' It really destroys the beauty and genius of Keith Reid's lyrics. On the other hand, I will grant Gary that correctly singing all of Keith's lyrics all of the time is probably the single hardest job in show business, so I'll cut him some slack here.

5. The half-hearted Shine On Brightly / Il Tuo Diamante was very annoying to me. If Gary would've stuck it out and sung the whole thing in Italian – like on the record – then I would've been OK with it.

6. The AWSoP on here is actually a decent and by-the-book two-verse version. Except for #7.

7. While Geoff Whitehorn is a great guitarist, he has a tendency to add many unnecessary and annoying 'flourishes' (or 'noodlings') to a few of the songs – namely AWSoP and Homburg both in evidence on this recording. On songs like Simple Sister and Whisky Train, however, he is great.

8. The two unrecorded songs – One Eye on the Future and Worried Life Blues (a cover) – are alone worth the price of admission, notwithstanding #1 thru #7 above.

So, in summary, and to be absolutely clear: Am I recommending this recording?

It's a rare band whose fans get such an immediate and constructive response to a personal album review: Procol's manager sent the following comments via The Procol Harum Message List (click here to join).

I acknowledge that the Click and Buy (if you have not already elected to join) was not the best experience. I personally had to join just to test and buy the album at the start to see if it worked, and reported several problems. Most were sorted but some remained, like not being able to download the whole album as a whole if you had purchased first and then returned to the download facility later. I still don't think we have solved this satisfactorily, but we're working on it.

The E-commerce was not our option. It came with the distributor who was chosen as they were willing to allow the fans to purchase the album first, and also have a download facility of 320kbs. I thought that was important.

The I-Tunes version should now be available worldwide for this album, so the ease of their system is available to those who are happy with 160kbs. If it is not available in your area, then please let me know. Also any feedback on whether the 320kbs facility is worth the effort would be good.

Part of the problem was my promise to provide the live album in October, but by the time the business was settled, and a test-site was achieved, we had only one week to check it out, and we made it available on the last day of the month.

I will hold my hand up to the teething problems still existing, because I wanted to keep my promise and keep to the timetable. Anyway, if you have now joined Click and Buy, then next live experience should be easier to enjoy.

My aim is to have something new for you in the next twelve months.

With regard to rest of the review I have to say this:

Opinions and opinions on music are like kneecaps. Most people have at least one. Most people (lawyers and politicians excepted) are entitled to their view. My view differs from that of Pat Keating in a couple of areas and I will clarify myself here, not argue. I set out to achieve various objectives for the fans and on behalf of the band, so people are entitled to some kind of explanation.

A performance by "good" musicians is just that. It's a performance. If you want a replication of the original recording, then I respectfully suggest that a "covers band" is where you need to go, or stick at home with your CDs. Whoever has been in Procol throughout the years has been worthy of making a contribution.

There is a simple, but basic, difference with live performance and studio work – only one is three dimensional. I think it is good to bring to those who were not able to be there a part of the experience of Procol – the live performance – that demonstrates that the band can still cut it in 2008.

Whether or not you might feel an interpretation of a song is good or better on one night doesn't really matter, because there is always another performance and at some point you will experience something really special. Let me suggest an analogy that may explain in part my take on the problem.

On your first date with your partner (for the sake of argument, let’s suggest that was forty years ago) your approach and excitement to that evening would be somewhat different to a dinner-date early this month with the same partner. No less caring, but the situation arises from a different perspective.

I think an artist's approach to an old and familiar song is very similar, except he has to entertain us all, not just one person. In my opinion it is preferable to come to the stage with feeling, rather than the need to duplicate. A band preserved in aspic will not be a joy to watch.

I believe we all get a better experience, especially when some really great performances are the result.

And lastly: when we record is entirely subject to opportunity. I never know what sort of travel-day we might have had, and how tired people will be, we have to take the chance. I think that what went on tape at the Union Chapel, and in Italy was worth sharing with everyone.

Have a good new year.