Two years ago Procol Harum linked up with the LA Philharmonic for a concert at the Hollywood Bowl which strongly divided opinions among its audience. This time they remedied the situation.

They played flawlessly and Gary Brooker's vocals were particularly effective in their earthiness. Mick Grabham on guitar provided some sizzling solos, and BJ Wilson's mathematical approach to percussion is marvelous. He's the band's epicenter and even his mini drum solo was interesting. Other drummers should take lessons from him. 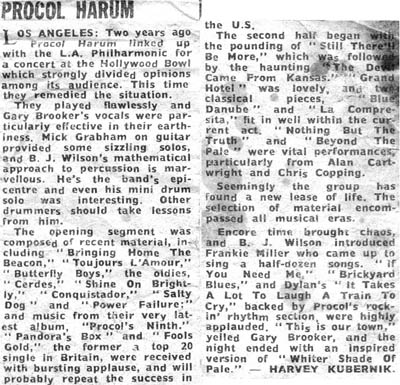 The opening segment was composed of recent material, including Bringing Home The Bacon, Toujours l'Amour, Butterfly Boys, the oldies, Cerdes, Shine On Brightly, Conquistador, Salty Dog and Power Failure; and music from their very latest album, Procol's Ninth. Pandora's Box and Fools Gold, the former a top 20 single in Britain, were received with bursting applause, and will probably repeat the success in the US.

The second half began with the pounding of Still There'll Be More, which was followed by the haunting The Devil Came From Kansas. Grand Hotel was lovely, and two classical pieces, Blue Danube and La Compresita [sic: wonder what this was? PH sometimes played La Cumparsita as a Grand Hotel stowaway but it's by no stretch of the imagination a 'classical' piece], fit in well within the current act. Nothing But The Truth and Beyond The Pale were vital performances, particularly from Alan Cartwright and Chris Copping.

Seemingly the group has found a new lease of life. The selection of material encompassed all musical eras.

Encore time brought chaos, and BJ Wilson introduced Frankie Miller who came up to sing a half-dozen songs. If You Need Me, Brickyard Blues, and Dylan's It Takes A Lot To Laugh A Train To Cry [sic], backed by Procol's rockin' rhythm section, were highly applauded. "This is our town," yelled Gary Brooker, and the night ended with an inspired version of Whiter Shade Of Pale.