‘Procol are at an all time low’ says organist Fisher 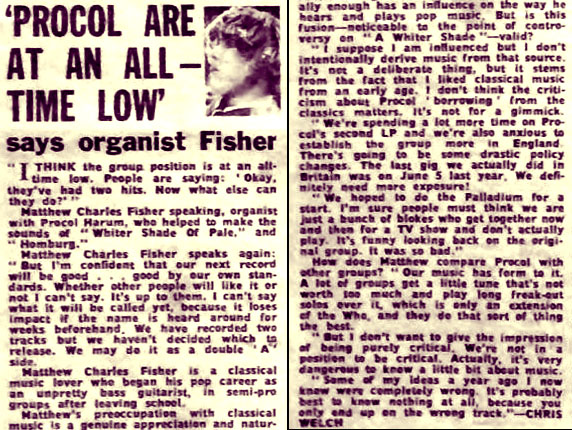 ‘I think the group position is at an all-time low. People are saying: “Okay they’ve had two hits. Now what else can they do?”

Matthew Charles Fisher speaking, organist with Procol Harum, who helped to make the sounds of Whiter Shade of Pale and Homburg.

Matthew Charles Fisher speaks again: ‘But I’m confident that our next record will be good … good by our own standards. Whether other people will like it I can’t say. It’s up to them. I can’t say what it will be called yet because it loses impact if the name is heard around for weeks beforehand. We have recorded two tracks but we haven’t decided which to release. We may do it as a double ‘A’ side.’

Matthew Charles Fisher is a classical music lover who began his pop career as an unpretty bass guitarist, in semi-pro groups after leaving school.

Matthew’s preoccupation with classical music is a genuine appreciation and naturally enough has an influence on the way he hears and plays pop music. But is this fusion –  noticeable to the point of controversy on A Whiter Shade – valid?

‘I suppose I am influenced but I don’t intentionally derive music from that source. It’s not a deliberate thing, but it stems from the fact that I liked classical music from an early age. I don’t think the criticism about Procol Harum “borrowing” from the classics matters. It’s not for a gimmick.

‘We are spending a lot more time on Procol’s second LP and we’re also anxious to establish the group more in England. There’s going to be some drastic policy changes. The last gig we actually did in Britain was on 5 June last year. We definitely need more exposure!

‘We hoped to do the Palladium for a start. I’m sure people must think we are just a bunch of blokes who get together now and then for a TV show and don’t actually play. It’s funny looking back on the original group. It was so bad.’

How does Matthew compare Procol with other groups?  ‘Our music has form to it. A lot of groups get a little tune that’s not worth too much and play long freak out solos over it, which is only an extension of The Who, and they do that sort of thing the best.

‘But I don’t want to give the impression of being purely critical. We’re not in a position to be critical. Actually, it’s very dangerous to know a little bit about music.

‘Some of my ideas a year ago I now know were completely wrong. It’s probably best to know no nothing at all, because you only end up on the wrong track.’