It was DJ-cum-producer Guy Stevens who first saw the potential of Keith Reid back in the spring of 1966. After failing to pair him up with Stevie Winwood and Jack Bruce, he introduced him to Gary Brooker, who’d recently disbanded The Paramounts to concentrate on songwriting and was looking for someone with a way with words. Together, they knocked out a few songs and tried to sell them to Dusty Springfield and The Beach Boys, among others, without success.

Frustrated, the pair decided to form their own band, which they named Procol Harum after a friend’s Burmese Blue cat. After several false starts they recorded a few demos, one of which was A Whiter Shade of Pale.

“In lyrical style I was actually inspired by quite a few playwrights — Harold Pinter, Samuel Beckett and Dylan Thomas,” Reid tells RC. “But it was Bob Dylan who made me pick up a pen and want to write, so he’s my main man.”

From the outset, Reid displayed a formidable talent for out-of-the-ordinary imagery. Classical literature and mythology often informed his historically-themed narratives, as evidenced by that odd ode to headgear, Homburg, and songs such as Conquistador and Outside the Gates of Cerdes from their 1967 début album.

Their second album, Shine on Brightly (1968), saw Reid’s lyrics develop further. “The overall theme of the album was an intensely inward soul-searching journey for me,” he looks back. Reid was also willing to experiment. “I told Gary we should do an extended piece with different movements and he was into it, so we started adding piece by piece.” This became their primal-scream suite, In Held ’Twas In I, which explored different facets of the human psyche.

“I was quite friendly with Hendrix at that time,” Reid confides. “As a person he was very different to his flamboyant wild man onstage. In fact, he was softly spoken, quite shy and immensely self-deprecating. But a very sweet guy. I wrote ’Twas Teatime at the Circus as my impression of Jimi.” 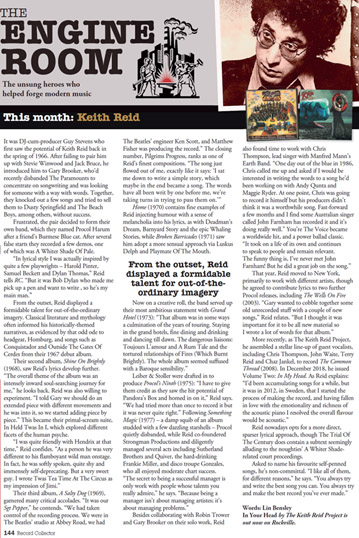 Their third album, A Salty Dog (1969), garnered many critical accolades. “It was our Sgt Pepper,” he contends. “We had taken control of the recording process. We were in The Beatles’ studio at Abbey Road, we had The Beatles’ engineer Ken Scott, and Matthew Fisher was producing the record.” The closing number, Pilgrims Progress, ranks as one of Reid’s finest compositions. “The song just flowed out of me, exactly like it says: ‘I sat me down to write a simple story, which maybe in the end became a song. The words have all been writ by one before me, we’re taking turns in trying to pass them on.’”

Home (1970) contains fine examples of Reid injecting humour with a sense of melancholia into his lyrics, as with Deadman’s Dream [sic], Barnyard Story and the epic Whaling Stories, while Broken Barricades (1971) saw him adopt a more sensual approach via Luskus Delph and Playmate of the Mouth.

Now on a creative roll, the band served up their most ambitious statement with Grand Hotel (1973): “That album was in some ways a culmination of the years of touring. Staying in the grand hotels, fine dining and drinking and dancing till dawn. The dangerous liaisons: Toujours l’Amour and A Rum Tale and the tortured relationships of Fires (Which Burnt Brightly). The whole album seemed suffused with a Baroque sensibility.”

Leiber & Stoller were drafted in to produce Procol’s Ninth (1975): “I have to give them credit as they saw the hit potential of Pandora’s Box and homed in on it,” Reid says. “We had tried more than once to record it but it was never quite right.” Following Something Magic (1977) — a damp squib of an album studded with a few dazzling starshells — Procol quietly disbanded, while Reid co-foundered [sic] Strongman Productions and diligently managed several acts including Sutherland Brothers and Quiver, the hard-drinking Frankie Miller, and disco troupe Gonzales, who all enjoyed moderate chart success. “The secret to being a successful manager is only work with people whose talents you really admire,” he says. “Because being a manager isn’t about managing artistes; it’s about managing problems.”

Besides collaborating with Robin Trower and Gary Brooker on their solo work, Reid also found time to work with Chris Thompson, lead singer with Manfred Mann’s Earth Band. “One day out of the blue in 1986, Chris called me up and asked if I would be interested in writing the words to a song he’d been working on with Andy Qunta and Maggie Ryder. At one point, Chris was going to record it himself but his producers didn’t think it was a worthwhile song. Fast-forward a few months and I find some Australian singer called John Farnham has recorded it and it’s doing really well.” You’re the Voice became a worldwide hit, and a power ballad classic. “It took on a life of its own and continues to speak to people and remain relevant. The funny thing is, I’ve never met John Farnham! But he did a great job on the song.”

That year, Reid moved to New York, primarily to work with different artists, though he agreed to contribute lyrics to two further Procol releases, including The Wells on Fire (2003). “Gary wanted to cobble together some old unrecorded stuff with a couple of new songs,” Reid relates. “But I thought it was important for it to be all new material so I wrote a lot of words for that album.”

More recently, as The Keith Reid Project, he assembled a stellar line-up of guest vocalists, including Chris Thompson, John Waite, Terry Reid and Chaz Jankel, to record The Common Thread (2008). In December 2018, he issued Volume Two: In My Head. As Reid explains: “I’d been accumulating songs for a while, but it was in 2012, in Sweden, that I started the process of making the record, and having fallen in love with the emotionality and richness of the acoustic piano I resolved the overall flavour would be acoustic.”

Reid nowadays opts for a more direct, sparser lyrical approach, though The Trial of the Century does contain a subtext seemingly alluding to the noughties’ A Whiter Shade-related court proceedings.

In Your [sic] Head by The Keith Reid Project is out now on Rockville.