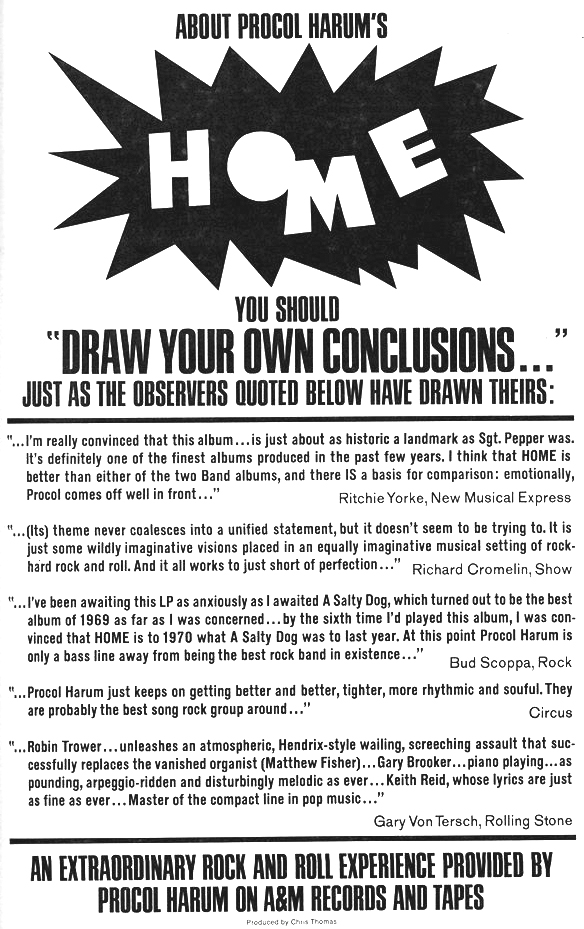 ABOUT PROCOL HARUM'S HOME YOU SHOULD "DRAW YOUR OWN CONCLUSIONS..." JUST AS THE OBSERVERS QUOTED BELOW HAVE DRAWN THEIRS:

"...I'm really convinced that this album...is just about as historic a landmark as Sgt. Pepper was. It's definitely one of the finest albums produced in the past few years. I think that HOME is better than either of the two Band albums, and there IS a basis for comparison: emotionally, Procol comes off well in front..." Ritchie Yorke, New Musical Express

"...(Its) theme never coalesces into a unified statement, but it doesn't seem to be trying to. It is just some wildly imaginative visions placed in an equally imaginative musical setting of rock-hard rock and roll. And it all works to just short of perfection..." Richard Cromelin, Show

"...I've been awaiting this LP as anxiously as I awaited A Salty Dog, which turned out to be the best album of 1969 as far as I was concerned...by the sixth time I'd played this album, I was convinced that HOME is to 1970 what A Salty Dog was to last year. At this point Procol Harum is only a bass line away from being the best rock band in existence..." Bud Scoppa, Rock

"...Procol Harum just keeps on getting better and better, tighter, more rhythmic and souful [sic]. They are probably the best song rock group around..." Circus