The early seventies band Gnidrolog was based on Stewart Elliott Goldring and his identical twin Colin (they later worked with five-star folkie and accordion wizard John KirkPatrick, and Colin also plays on the third Yes album). Stewart left a message on BtP's guestbook, saying he wanted to contact Chris Copping, and we were able to put them in touch: the ensuing e-mail conversation is excerpted below and may be of general interest! 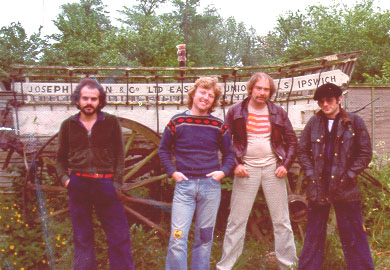 Colin [Goldring] and I met Chris through a mutual friend in the early 70s when we were in Gnidrolog and Chris had joined Procol. I don't know the others so well but Chris, Colin and I recorded tracks with Chris at his home in Eye, Suffolk in the early 70s. Chris had his own studio and, would you believe it, a pub in his house in Suffolk! It was a fabulous place called The White House and we used to visit him there quite regularly. We recorded four tracks and somewhere I've got a photo shot and a cassette copy of the stuff we recorded. Chris is a great musician and plays equally good keyboards and bass. Left to right in the photo: Stewart Goldring (vocal, guitar); unknown drummer; Chris Copping, bass, keyboard, vocal; Colin Goldring, vocal, guitar, sax etc.

Procol Harum seemed to have trouble holding on to a guitarist and I hoped to play with them one day but it never happened. I think that Procol were one of the most important bands, I loved their music and still listen. Broken Barricades is a particular favourite of mine.

We also recorded with Leiber and Stoller as the Goldring Brothers and had one single with them and I know that Procol went on to work with them. What a small world the biz is! If you're in touch with Mick Grabham, ask him if he remembers playing guitar on a Leiber / Stoller song we did for A&M called Blue Lou. The flip side was one of our songs, called Love Me While you Can.

Colin and I will be travelling to Cairns [Australia] to record with our old buddy Nigel Pegrum and Steeleye Span's ex-bassist, Rick Kemp. We decided to release a new Gnidrolog album and I thought it would be nice to get Chris to lay down some keyboards for us. By the way, if you didn't know, Chris's nickname is 'The Prof.'

I got Chris's number and gave him a ring today! Needless to say he was duly surprised and we had a long chat. It was great to hear him again. Cairns is a long way from Melbourne [where Chris lives] but maybe if he can't make it to Cairns in April I'll visit him on the way back with the masters: he can sprinkle some fairy dust over it!

Chris plans to get on the net soon. He tells me he misses real ale so if anyone can send him a keg of Abbotts he'll be most obliged! We also talked about BJ [Procol's drummer]. What a great loss he is; I think that possibly he was one of the very best and he is sadly missed by many.

I didn't know about Abdul the Butcher [as Gary called Chris at the Hollywood Bowl] but we knew Chris mainly and not the others so well. Chris is the only person I know he can complete a Times Crossword and he is a brainy bastard - hence the nickname the Prof.

As soon as our new website is up it will contain information about Gnidrolog. Our second album [Lady Lake] has been re released in Korea and Japan under license to BMG and I will send you further information about next year's releases in due course.

You know, I was in my late 20s when I played with Chris and I'm now 48. Like Chris, I've been involved with commercial work which has been boring me to tears for some time now. It's great to see that people still appreciate and listen to good music. I think the modern scene is impoverished but I do like some of the bands like Pulp, Radiohead and REM because they are prepared to take some risks.

However the level of musicianship generally I think is suffering and I wonder how much this could be due to technology? Bands like Procol were not just one hit wonders. There is real craft in what they do and I hope that as young people's tastes once more become more eclectic and broad, that they will discover this kind of music. I wonder how many people will be listening to the Spice Girls in 25 years' time?

Many thanks again for your help, it was great to speak to Chris after all these years and to re-establish contact. Please send kind regards to your readers. You can use anything you like of what we said: I love chatting on the net so if anyone wants to chat to me in cyber space they can email me here.

September 1999: Chris Copping has completed his tracks for us in Melbourne and we are in the final mixing stages of our new album, Gnosis.

Recorded in Australia and the United Kingdom this CD is destined to be one of the most important progressive releases of the decade. Featuring Colin and Stewart Goldring, there are performances also from some of the world's other greatest musicians including Rick Kemp, Chris Copping, Nigel Pegrum and Nessa Glen. Some of the tracks are supplemented with Australia's greatest indigenous musicians including Ash Dargan and David Hudson.

This long-awaited classic has been nearly a year in the making and will be one of the most costly progressive music epics ever made. If you want to find out more about these elder statesmen of the genre and this exciting album, go to Gnidrolog's web site at http://stewartelliott.org/gnidrolog ; but don't bother waiting for the photo of Chris to load: you can see it at BtP!

Thanks, Stewart, for text and pictures

'Gnidrolog's music has been compared with many other influential bands of the era including, most notably, Gentle Giant, who often used to go and watch them perform. Bands such as King Crimson, Van Der Graaf Generator, Yes, Jethro Tull and Colosseum have all been likened to Gnidrolog but none of these groups embraced the rebellion, discordant quirkiness and eccentric individuality that Gnidrolog, as an entity, not only possessed but combined to such dramatic effect in their song-writing.

'What set Gnidrolog apart from the pack is difficult to pinpoint. Certainly their refusal to use the electric organ went some way to making them sound different from most other 'prog' outfits; after all, who ever heard of a progressive-rock band without a Hammond?

Gnosis opens with a dark and mysterious track entitled Reach For Tomorrow. This moody number features soul-searching vocals from Colin
together with some weighty guitar riffs from Stewart. All the while a sense of torment permeates the music whilst Gothic style vocal bass drone deepens the foreboding undertones. This is also the first time that keyboards have been allowed to contribute to the Gnidrolog sound, as a backdrop to augment the monotone drone.

' This richness in production is exemplified best in the anthemic Kings Of Rock, a song originally penned in the late 70's, being further enhanced by the keyboard skills of special guest Chris Copping, of Procol Harum.