This re-release has additional pictures inside the liner, and completely different liner-notes: thanks to Jon Tso for transcribing these.

A bold musical project by one of the most original minds in rock music has resulted in this richly entertaining and spiritually uplifting album. Within Our House serves as both a tribute to the continuing creativity of Gary Brooker and also provides a lasting memento of a unique event, when the twin forces of classical and rock music met within the hallowed sanctity of a church.

Singer, keyboardist and composer, Brooker is famous for his work with Procol Harum, the band that created A Whiter Shade of Pale, one of the most memorable rock ballads of all time. With poignant lyrics by Keith Reid and with a moving Bach-like organ theme supplied by Brooker, this song captured the imagination of a generation. It remains one of rock's most evocative anthems, ranking alongside Led Zeppelin's Stairway To Heaven and John Lennon's Imagine.

Brooker is a quietly spoken, reserved, but enthusiastic man, far removed from the usual image of the itinerant rock'n'roller. His thoughtful, reflective brand of dignified music cannot be compared to the uproar of heavy metal. Yet like his contemporaries, he too was raised among the travelling beat groups and soul bands of the early Sixties and spent much of his life on the road, either composing, or performing music. He's developed his own philosophies and beliefs along the way, and his road has led him to greater involvement with classical music and the church. 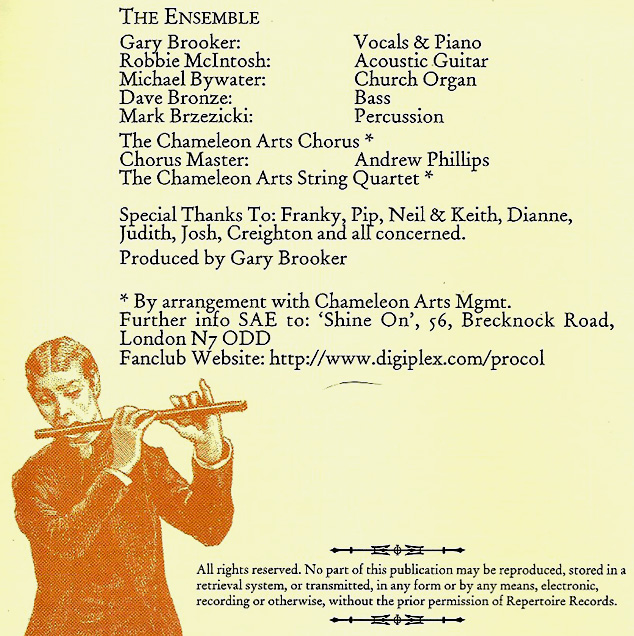 Gary Brooker was born in 1945 in London, the son of Harry Brooker, the famous Hawaiian guitarist. They moved to Southend, Essex, in 1955, where he went to school with guitarist Robin Trower and bass player Chris Copping. They teamed up with singer Bob Scott and drummer Mick Brownlee to form The Paramounts in 1959, which became one of the first really effective R&B bands in England during the early sixties. They covered music by their favourite artists, which ranged from James Brown to Ray Charles, and their influence is still strongly felt in Brooker's soulful vocal style. The band became professional in 1963 when Brownlee left, to be replace by Barrie J Wilson.

The group began recording R&B material and their first single Poison Ivy was a Top 40 UK hit. That rising young group, The Rolling Stones, quickly proclaimed that The Paramounts were one of their favourite British groups! But in 1966 The Paramounts, hit by inner disagreements, split up and Gary Brooker decided to concentrate on writing material with partner Keith Reid.

The following year Brooker and Reid put a new band together. Assisted by top producer Denny Cordell they recorded a version of Reid's poem A Whiter Shade Of Pale. The surreal lyrics were set to Brooker's moving organ music on a theme inspired by Bach's Air On the G String.' The resulting single caused a sensation. It was played virtually non-stop on Radio London, the British pirate radio station, and by June 1967 it had topped the UK charts where it stayed for six weeks. It was eventually toppled by another Sixties' classic, The Beatles All You Need Is Love.' The record's appeal swiftly spread abroad. It got to Number 5 in the US, was a huge hit in Germany and sold over six million copies worldwide.

Procol Harum enjoyed enormous success for a decade and Brooker-Reid produced many more classics. Among their best-known albums were Procol Harum (1968), Shine On Brightly (1968), A Salty Dog (1969) and Home (1970), all now available on Repertoire CDs. A Salty Dog is one of their best known pieces, and it was chosen for special treatment at the charity concert, held on September 28, 1996 at St. Mary and All Saints, a church in rural Surrey, England. It was Gary's wish to help his local church raise funds, and brought together the The Chameleon Arts choir, a string quartet and a rock rhythm section to perform this striking blend of music. There is a festive mood about the proceedings, which quickly becomes apparent after the spoken introduction by the Revd Geoffrey Willis, who pays tribute to the assemble musicians and technicians who made the concert possible. Pastime With Good Company sets the pace as the jovial Chameleon Arts choir is accompanied by a 13th Century-style drum rhythm which segues into a rousing rock beat. The good taste by which this is achieved is sustained throughout the concert. Within Our House is a much more sincere and artistically gratifying event than many a much trumpeted 'mixed media' spectacular held in some vast stadium with lasers and fireworks!

The church acoustics provide a perfect recording environment so that choir, strings and band retain their clarity and balance. This is evident from the vigorous bowing displayed on Mattachins and the beautiful singing that breathes life into Linden Lea.

In contrast, Gary's men stride purposefully into Holding On and A Salty Dog with all the power that only a rock band can unleash. A strong Southern gospel feel enlivens Psalm For St. Mary, in which Gary rocks out on piano and sings 'Praise the Lord' with all the power at his command, before launching into A Whiter Shade of Pale, with its soaring chords and enigmatic opening cry of 'We skipped a light fandango, turned cartwheels cross the floor ...'

There were two concerts held at the church which Gary recorded initially for a limited issue CD. Says Gary: 'I never did say quite where the church was on the CD, in case people started tramping down there. I did the concert to raise funds for the church. I brought along a choir, string quartet and the unplugged rock band. I went to a lot of trouble, so I thought I ought to get some recording machines in, just in case it turned out all right – and it did! We played comparatively quietly and there weren't any problems. We had played a Procol Harum concert with the same choir at The Barbican Centre in London, and they were very good.'

Gary took pains to ensure the musical programme would be appropriate for the setting. He explains: 'Songs like A Salty Dog and Nothing But The Truth have a moral comment to make and fit the atmosphere. Holding On s an anti-war song which Keith Reid and I wrote for an album which came out in 1991 and has become part of the repertoire.'

There were only 150 people in the audience, which was the church's maximum capacity. 'They were stuffed in there like sardines!' says Gary. 'There wasn't much scope for raising a huge amount of money, but we did two concerts on the same evening.' The musicians included his long time drummer and percussionist Mark Brzezicki, (famed for his work with Big Country), Dave Bronze (bass), Robbie McIntosh (acoustic guitar) and Michael Bywater on church organ. Gary arranged all the music for both strings and the choir.

Says Gary: 'I wrote two special pieces for the concert including Within Our House, which I wrote with Keith Reid. We also did the old Elvis Presley song Peace In The Valley. On the Procol Harum pieces Holding On and A Salty Dog, some Latin text added for the choir [sic]. We also did A Whiter Shade of Pale, of course!' After mixing the concert, Gary thought he'd like to press up a limited edition of one thousand CD copies for Christmas, which quickly sold out [sic] via the Internet and through fan clubs.

The record then came to the attention of Repertoire Records, who decided to issue this present CD. Says Gary: 'We had a good night of excellent music and we raised some money for the village church, which was the objective.'

Procol Harum continues to tour and Gary Brooker is still very active with other projects. In May 1997 he was off on the road again, this time in America with Ringo Starr's Band, alongside Jack Bruce and Peter Frampton. But while super groups and US tours are great fun, when it comes to creating music with depth and charm there is nothing that can beat the night Gary Brooker played a concert in church – with a little help from his friends.

You can order this album from Amazon by following these links: Amazon USA or Amazon UK