Readers will be specifically interested in Gary’s participation in this concert but, by necessity, it needs to be reviewed in two parts.

When ‘Beyond the Pale’ flagged up that Gary Brooker was going to appear in my home city, I had to do a triple-take! However, once confirmed, a potential, clashing Japanese trip was summarily dismissed. 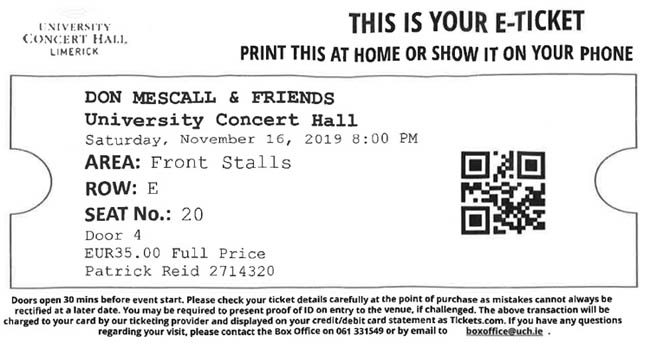 Although it would be untrue to pretend that I had any great awareness of Don Mescall himself in advance of the show, I persuaded my sister and brother-in-law to come along and, duly, booked our tickets.

This was the second year that ‘Don Mescall and Friends’ has come to the University Concert Hall and it is far from impossible that, gargantuan-required effort aside, it could become an annual event.

Starting at five past eight, the concert ran until half past midnight. With just a twenty-five minute break, that was four hours on stage, easily the longest in my experience. Yet, with the minor exception of a hiccup involving the guesting Chinese opera singer, everything flowed and the full-house audience all stayed to the very end.

Accompanying Mescall himself (guitars and mandolin) was a ten-strong band, made up of a pianist/musical director, acoustic, electric and bass guitars, two female backing vocalists, drummer, synths and Hammond player, violinist and a saxophonist/multi-instrumentalist.

Well-known Irish TV personality, Mary Kennedy (whose Nationwide television show had done a feature on Mescall in the past) acted as a faultless compère throughout, and the numerous guests included singers Frances Black (now, also, a state senator), Paul Brady, Basil Mead (over from London) and Brian Kennedy, songwriter/musicians from America in Greg Sutton, Will Robinson and Mike Reid, harpists, concordion players, an exquisite soprano and many more. (As an aside, this would have been an ideal occasion for the late Dolores O’Riordan to have been a part of, given her very similar geographical background and nature to Mescall – such a shame and tragedy).

Background videos and montages accompanied the songs from Mescall’s hit album, The Lighthouse Keeper, as well as from his back catalogue. A collage at the outset displayed clips of multiple recordings of his songs, which have been hits for myriad artists, and which educated those unfamiliar with his prowess.

What was most impressive about the whole production was not only the effort put in by Mescall in producing (and rehearsing) such a show, but also his exceptional humility from start to finish, emphasising and never forgetting his local and rural roots and his gratitude for all who had travelled to contribute.

This was epitomised when he called his amazingly fit, 96 year-old mother to the stage (with her 95 year-old best friend!) to pay tribute to her (something that he did for numerous others as well).

It is beyond doubt that – regardless of the sold-out nature of proceedings – he significantly underwrote the night’s events.

Earlier on Don had mentioned, as an allusion to his (un-named) star guest, how sincerely thrilled his organist was at the prospect of playing with him. Gary eventually got on stage at 23:50, as the final act, and took his seat at a beautiful Steinway on the extreme left.

His first number was to be Live Long Rock and Roll, the song that Mescall had co-written with famous guitarist Henry McCullough, but which he completed after McCullough’s death with Brady, Paul McCartney, Nick Mason, Albert Lee, Paul Carrack, Chris Stainton and Gary at his Pepper Pot studio in Greenwich (London).

This generated great applause after which Don welcomed both Mr and Mrs Brooker and, then, effused about and chatted to Gary who mentioned that he had never been to Ireland before, let alone Limerick (not sure about that, think there might have been a Dublin gig way back and a later one with the 90s’ re-incarnation ?).

Upon being asked if he had a chance to sample any Guinness yet, Gary replied that he hadn’t even had a cup of coffee! Cue much laughter.

Don, as an esteemed and successful songwriter, then explained, with total sincerity, how two of the five songs that he admired the most had been written by Gary – and how ecstatic he was that Gary had agreed to actually perform them here.

And so, it came to pass that A Salty Dog was played and sung perfectly to a backdrop of a lonely, perched black-and-white seagull.

They backed on Gary’s first offering and sang the Latin part at the start of the second half (not the introduction) as well as the outro. The ending brought the first full standing ovation of the night and the excitement was palpable at the anticipation of what was still to come.

A Whiter Shade of Pale was then sung immaculately (just the normal two verses) with school choir backing plus Hammond and the main band. The reception at conclusion was tremendously appreciative and warm, nowhere more so than from the musicians on-stage. The aforementioned organist was overwhelmed and very emotional as he rushed to thank Gary, as were the arranger and multi-instrumentalist (apparently brothers).

To round off a truly exceptional night (and early morning’s!) entertainment, 120 or so singers (including Gary) and musicians all came together to back and join in with Mescall’s May Love Be the Last Song That You Sing (as did the audience).

I so hope that Gary enjoyed the evening as much as everybody else did and that the appreciation for him from all concerned seeped through. Likewise that he and his muse of 53 years and rising had a memorable stay in Ireland despite its being so late in the year (it was crisp November weather but, most importantly, a dry weekend).