Ain't Nothing to Get Excited About 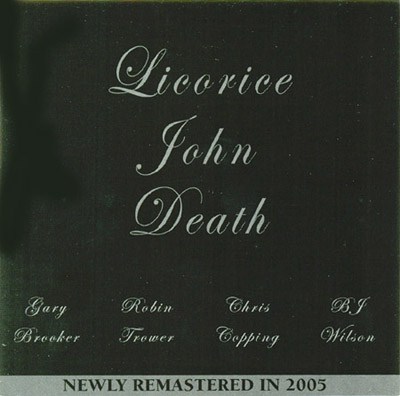 It took over three and a half decades, but you are now in possession of the “lost” Procol Harum 1969 Abbey Road sessions known as Licorice John Death (Liquorice in the UK). Discovered a few years ago, in a mislabeled tape box at this legendary St John Wood studio, the Licorice John Death recordings were briefly released as a very limited fan club release for Gazza Records. For this newly remastered edition, Gary Brooker has unearthed these thirteen lost tracks recorded with the classic mid-period Procol Harum line-up of himself, Robin Trower, Chris Copping and the late BJ Wilson. Along with the careful restoration that you have come to expect from Friday Music, Ain’t Nothin’ To Get Excited About is a rare chapter in the long history of the beloved Procol Harum.

Being the astute Procol Harum enthusiast that you most likely are, you would know that this session originated around the time between their much applauded Home and Broken Barricades releases for A&M Records. At the time of these recordings, two of their key members had departed, Matthew Fisher (organ) and David Knights (bass). Enlisted to handle both the organ and bass chores was the multi-talented Chris Copping, who was formerly with Procol Harum when they were know as The Paramounts in the early 60s. Chris Thomas, who had gone on to produce some of their most successful recordings, manned the controls for this all-night recording session. With a back-to-the-roots approach, this unique quartet played a hard rocking, non-stop set of early R&B, a new original and several 50s rockers which culminated into a rare glimpse to their past, and as a tribute to their devoted friend and fan from The Paramounts era, Dave Mundy.

Dave Mundy was always trying to get the band to change their name to Licorice John Death and His All Stars. He felt The Paramounts wasn’t an appropriate stage name for such an awesome group of rockers.

In a cruel twist of fate, Mundy sadly had mental problems, and he spent time in a mental hospital. The band from time to time would check him out and bring him to Paramounts shows. However, later during their successful reign as Procol Harum, Mundy jumped from a 15-storey building and as Gary Brooker sadly noted “found peace.” After his death, the band located his artwork idea for the proposed, Licorice John Death album sleeve, which graces the folder you are now holding. When the tapes for this disc were discovered in the late 90s, it was a further tribute element which added to these sessions of which Mundy had already pre-titled, Ain’t Nothin’ To Get Excited About.

The choice of material is vintage 50s rockers and pounding R&B classics. Jerry Lee Lewis’ Breathless and High School Confidential, Fats Domino’s I’m Ready, Little Richard’s Lucille, Keep A Knockin’ and Girl Can’t Help It. Even an early Sun Records reading of Charlie Rich’s Every Thing I Do Is Wrong gets an incredible work-out that has to be heard to be believed.

The real thing here is the band’s performance. Gary Brooker sings and plays like never before. He is screaming, shouting, banging the keys and having quite the party with these recordings. Robin Trower takes these classics and turns them into bluesy renditions that pre-echoed his solo work on albums like Bridge of Sighs. Check out his masterful work on Kansas City and Matchbox. Chris Copping plays a powerful bass to B.J. Wilson’s soaring drum beat throughout the entire album. Track after glorious track, these four gents from London truly delivered one of the more rocking performances of their day, and it lives on today thanks to some unexpected housecleaning at the famed Abbey Road studios.

Friday Music is proud to be the new home of this fantastic historical recording. As a continuing release in our extensive Procol Harum and related artists Remaster series, Licorice John Death may have started out as a myth, but as these sessions confirm, eventually developed into musical reality. Brooker, Trower, Copping and Wilson, known to the world as Procol Harum, took a break from super stardom for a few precious moments in 1969 and became the legendary, if just for one rare night, Licorice John Death and His All Stars.

NB Joe informs BtP that the change from 'Liquorice' to 'Licorice' was made with Gary Brooker's consent, with the idea that US customers will be able to find the album on search engines. Of course it means that UK customers won't be able to ... but it has been available in the UK before in the correct spelling, so they've had their chance!