This is an absolute must-have item for any serious Procol Harum fan, in view of its brand-new bonus-track! This nicely-presented CD  reissue from the folks at Friday Music sounds really good ... the remastering brings out a lot of great detail. Fans may feel that they don't need another version of this album – they've already got Drunk Again, which is offered as a bonus track ... but nobody's got this fabulous 9+ minute version of The Blue Danube which Gary Brooker recently unearthed specially for this album. It's three minutes longer than the other official version of The Blue Danunbe, which was played live, whereas this track was produced by Chris Thomas at Apple Studios, and has not seen the light of day until now. In case you need convincing, there's a snippet from it below ... and a few lucky fans won it in BtP's Autumn Competition (thanks, Friday!)

Liner note
A successful follow-up to Grand Hotel was in order for Procol Harum as their rock classic Exotic Birds and Fruit climbed the album charts and received significant airplay in 1974. The award winning duo of Gary Brooker and Keith Reid continued their winning streak with this fine collection of songs that would go on to be some of their most acclaimed in their long history. Recorded in London during the winter of 1973 and 1974, the band had to resort to a three-day week work schedule, confining to the country’s then energy crisis laws. In the midst of difficult recording conditions, the band still managed to yield a wonderfully solid collection of memorable rock oriented material, akin to their previous efforts Home and Broken Barricades.

Nothing But The Truth kicks off this album, and from the driving piano provided by Gary Brooker and the orchestral arrangements throughout the duration [sic] of this incredible album, the listener is treated to song after song of classic Procol Harum. Mick Grabham and Alan Cartwright’s guitar and bass work are stunning and the much emulated drumming of the late B.J. Wilson truly added to the uniqueness of these tracks.

Keith Reid’s prophetic lyrics helped deliver another hit single for the team with the haunting As Strong As Samson. Joined by B.J. Cole on pedal steel guitar, this tune has gone on to be one of the more enduring songs from this fine album. “Fighting for freedom the truth and the word. Fighting the war for the end of the world.”

For those who endlessly “search for holy grail”, the toast-like Beyond the Pale shows the classical orientation of this popular band. Cleverly mixing and weaving melodies and meters unlike other rock acts of the time, Procol Harum continued to cover new territory on this song as well as the powerful The Idol. Keith Reid’s imagery combined with Gary Brooker’s unmistakable vocals helped deliver one of the more profound songs from this album “And so they found he’d nothing left to say. Just another idol turned to clay.”

Friday Music is excited to present Exotic Birds and Fruit for the first time ever on compact disc in North America. It hasn’t seen the light of day here in almost three decades. As another installment in our Procol Harum Remaster series, this already fine collection is now available for all to hear with two very rare bonus tracks: Drunk Again, which was originally the b-side of Nothing But The Truth; and the recently-discovered extended studio version of Strauss II’s The Blue Danube. Gary Brooker noted recently “In spring 1975 Procol were on tour in Europe when they had a call from the City Fathers of Vienna asking if they would record The Blue Danube for a special release celebrating 150 years since the birth of Johann Strauss II. Feeling honoured, they said yes and rushed out to buy a tape of it and were shocked to find out that it wasn’t the short ‘little ditty’ we all know but a long and complicated piece with close to a dozen tunes going on! Nevertheless, they learnt it, and, under the watchful eye of Chris Thomas at Apple Studios, duly and with great respect, did what only Procol could do.”

After the success of Live With The Edmonton Symphony Orchestra and Grand Hotel, Procol Harum continued to receive further acclaim with their landmark Exotic Birds and Fruit album. Although it has been thirty years since its vinyl release, just think of it as a fine vintage wine that only grows better over the years. Enjoy! 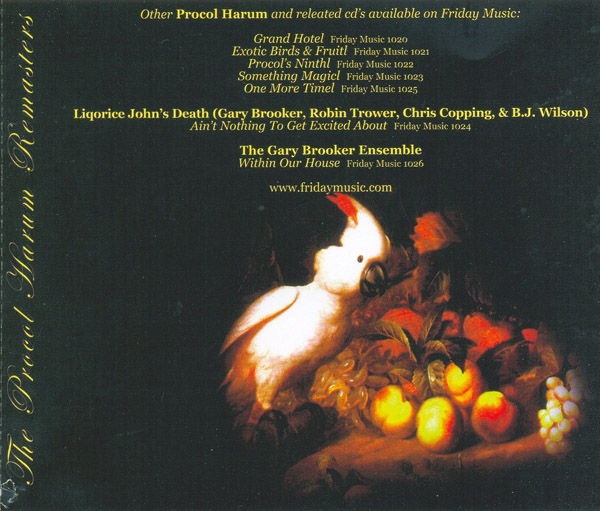