Fame? Not for me, says pop star’s working mum 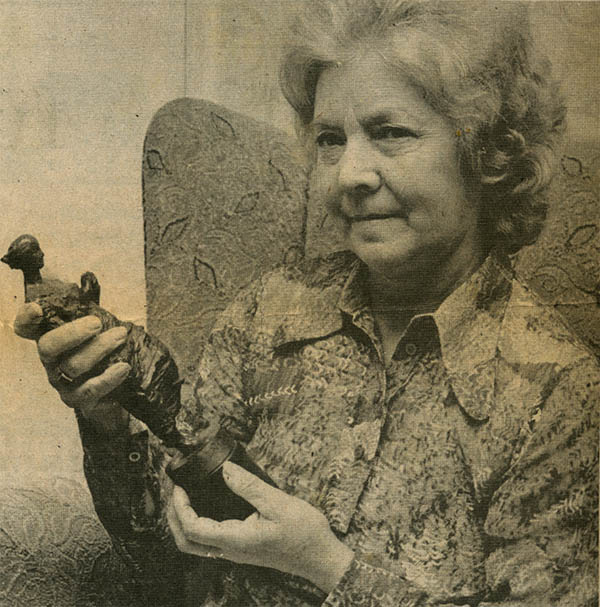 Violet Brooker lives in a tiny semi-detached bungalow at Eastwood and works on a factory assembly line.

Her son Gary, star of the Procol Harum pop group, lives in luxury in a 17th-century house in Surrey.

He flies to the United States regularly for concert tours … she’s still paying off the mortgage on her home.

But that’s the way Mrs Brooker wants it.

“I know I would only have to ask Gary for anything and I could have it,” she says. “But I don’t ask. I think you’re better on your own.”

She’s happy at his success … though she was not when he failed the exams that would have secured him the steady job as a technician that they both wanted when he left school.

He wrote the music for the record that became number one in the charts in 1967 and stayed there for several weeks.

The group has yet to make another record to rock the pop world, but it still attracts huge audiences at concert tours in America. And its release Conquistador is creeping up in the charts.

If Mrs Brooker still has a twinge of fear every time her son boards a ’plane, she has managed to come to terms with his life.

It’s one she’s used to – her husband Harry was a professional pianist too, only in humbler terms. His band used to play light music nightly at the Palace Hotel, Southend. 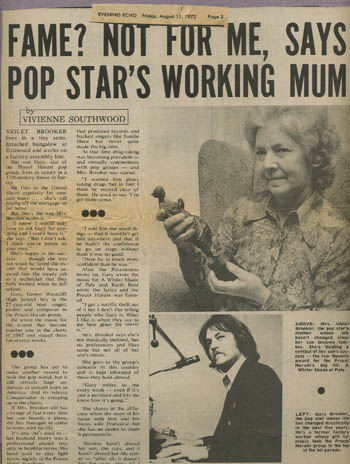 Before she moved with son Gary and daughter Angela to Southend, she saw her husband only on days off and she sees her son only between tours.

Success, she says with fond indulgence, hasn’t changed him .He’s still quiet, unassuming and overwhelmed by it all.

Music was in his blood though, and before long he was working in a group called The Paramounts that produced records and backed singers like Sandie Shaw but never quite made the big time.

At that time drug-taking was becoming prevalent – and virtually synonymous with pop groups – and Mrs Brooker was scared.

“I warned him about taking drugs but in fact I think he steered clear of them. He used to say, ‘I’ve got more sense’.”

I told him the usual things – that it wouldn’t  get him anywhere  and that if he hadn’t got the confidence to go on stage without them it was no good. “Now he is much more confident than he was.”

After the Paramounts broke up, Gary wrote the music for A Whiter Shade of Pale and Keith Reid wrote the lyrics and the Procol Harum was formed. 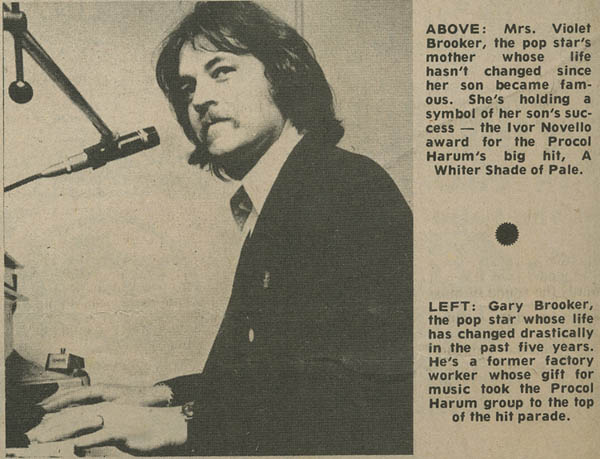 “I got a terrific thrill out of it but I don’t like telling people who Gary is. What I like is when they say to me how great the music is.”

Mrs Brooker says she’s not musically inclined, has no preferences and likes some but not all of her son’s music.

She goes to the group’s concerts in this country and is kept informed of those they hold abroad.

“Gary writes to me every week – even if it’s just a postcard and lets me know how it’s going.”

She shares in the affluence when she stays at his home with him and his Swiss wife Françoise but she has no desire to share it permanently.

The group, which includes two other Southend members, Chris Coppin [sic] and Barry [sic] Wilson, hasn’t produced many records in its five years of fame and those it has have never gained acclaim.

“It’s one of those things,” says Mrs Brooker and it’s one that isn’t going to change their style of music although, she says, Gary would love another big hit. In America, though, they’re playing to audiences as large as 60,000.

“Even so, they don’t get attacked like The Rolling Stones. They’re just a different type,” she says thankfully.

And although she once wished he’d be a nine to five man, she has no regrets now.

“He would never had had [sic] the things he has today. I’m really pleased for him.”

Captions:
Above: Mrs Violet Brooker, the pop star’s mother whose life hasn’t changed since her son became famous. She’s holding a symbol of her son’s success – The Ivor Novello award for the Procol Harum’s big hit, A Whiter Shade of Pale.

Left: Gary Brooker, the pop star whose life has changed drastically in the past five years. He’s a former factory worker whose gift for music took the Procol Harum group to the top of the hit parade.