Warren Ferguson in The Edmonton Journal, May 1992 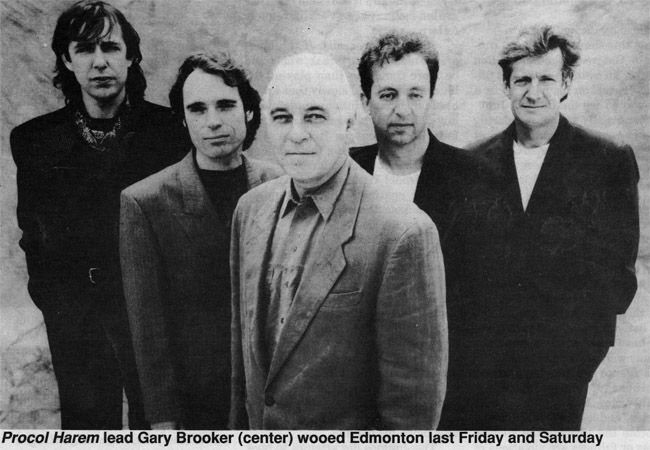 Procol Harem and the Edmonton Symphony Orchestra with the Greenwood Singers, May 29, 30, Jubilee Auditorium

There was more than good music when British rock band Procol Harem reunited with the Edmonton Symphony Orchestra after a pause of over twenty years. There were remembrances of the seventies when rock music meant something and was well-crafted.

The audience at the sold-out venue at the Jubilee Auditorium was treated to such hits as Conquistador and A Whiter Shade of Pale and a collection of new tunes fro Procol’s new album, The Prodigal Stranger. 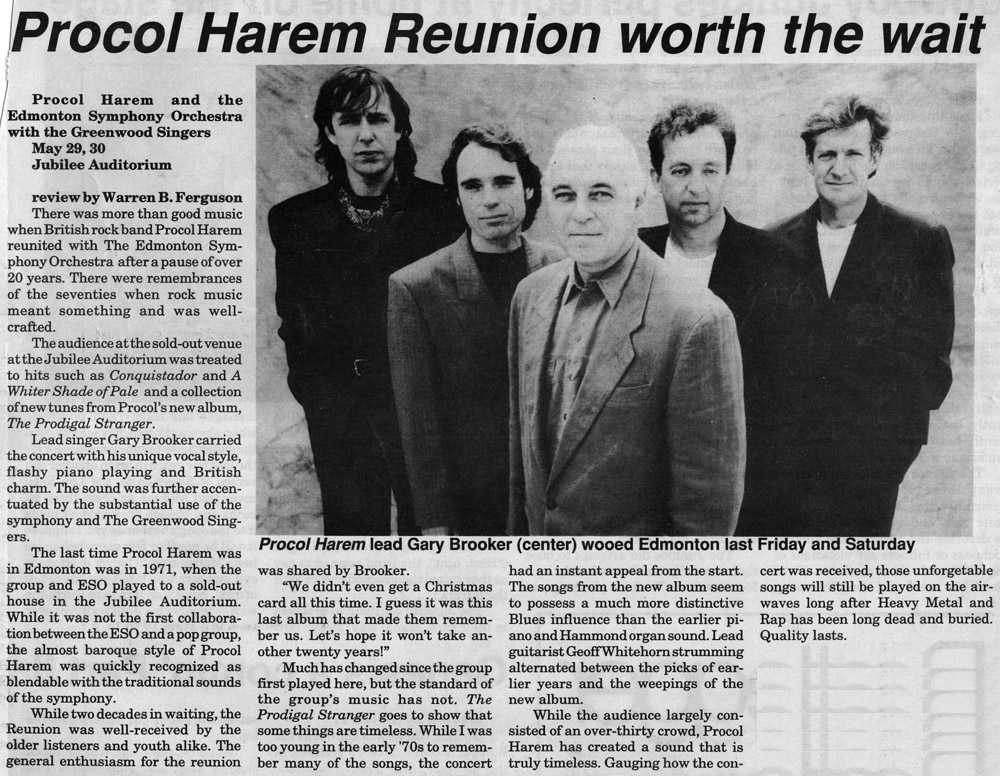 Lead singer Gary Brooker carried the concert with his unique vocal style, flashy piano playing and British charm. The sound was further accentuated by the substantial use of the symphony and The Greenwood Singers.

The last time Procol Harem was in Edmonton was in 1971, when the group and ESO played to a sold-out house in the Jubilee Auditorium. While it was not the first collaboration between the ESO and a pop group, the almost baroque style of Procol Harem was quickly recognized as blendable with the traditional sounds of the symphony.

While two decades in waiting, the Reunion was well-received by the older listeners and youth alike. The general enthusiasm for the reunion was shared by Brooker.

“We didn’t even get a Christmas card all this time. I guess it was this last album that made them remember us. Let’s hope it won’t take another twenty years!”

Much has changed since the group first played here, but the standard of the group’s music has not. The Prodigal Stranger goes to show that some things are timeless. While I was too young in the early 70s to remember many of the songs, the concert had an instant appeal from the start. The songs from the new album seem to possess a much more distinctive Blues influence than the earlier piano and Hammond organ sound. Lead guitarist Geoff Whitehorn strumming alternated between the picks of earlier years and the weepings [sic] of the new album.

While the audience largely consisted of an over-thirty crowd, Procol Harem has created a sound the is truly timeless. Gauging how the concert was received, those unforgettable songs will still be played on the airwaves after Heavy Metal and Rap has been long dead and buried. Quality lasts.

Thanks, Tim Bossenberry, who adds, 'May 29 was a Friday and May 30 was a Saturday. I was at the Saturday night concert, so I would suspect that the newspaper review (above) was on Sunday May 31, which is when most of the arts entertainment is published in the newspaper. There was the one mention about the sold-out crowd, and no mention of an impending second concert, so I think that might be the case.'