The following article, which mentions Matthew Fisher's organ-playing in the period before AWSoP hit the charts, was submitted by Charlie Allison; below that is another account of the same story, sent in by Paul Jary.

Constant exposure to the scholarly, somnolent riddles of A Whiter Shade of Pale has dimmed the senses to the point where most of us would happily never hear it again. But while it's now dismissed as a bland MOR-leaning ballad of balls-aching portentousness, it would be disingenuous to suggest that the song was anything other than a bolt from the blue at the time – as Pete Frame recently observed "unless you were around at the time, you'll never know how utterly surprising, unique and wonderful it sounded".

Certainly it was one of the biggest records of the halcyon summer of '67, its heavy-lidded drowsiness and arcane scriptures finding favour with the counter-cultural warriors (John Lennon was so smitten by it that, during the sundry private parties and press receptions held in honour of Sgt Pepper, he spent much of the time playing Procol's single instead!), while organist Matthew Fisher's Bach-derived melody meant that the mums and dads could hum along as well.

In fact Fisher had been vamping that Bach cantata since the previous year, when he'd augmented the line-up of Peter Jay & the Jaywalkers during their brief spell as backing band for the newly-solo Manfred Mann singer Paul Jones. 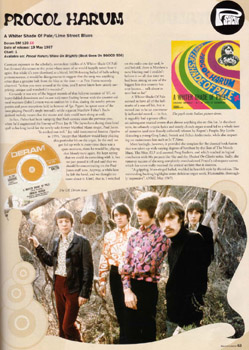 "It worked out so well," Jay told instrumental fanzine Pipeline in 1994, "except that Matthew would keep playing this particular bit on the organ. In the end we got fed up with it; every time there was a spare moment, there he would be, playing that bloody tune again. He kept saying that we could do something with it, but we just passed it off and said we should be concentrating on the Paul Jones stuff now. Anyway, a while later he left the band, and we thought no more about it. Until, that is, I switched on the radio one day and, lo and behold, there is Matthew's tune blasting out! I couldn't believe it – all that time we had been sitting on one of the biggest hits this country has ever known ... talk about so near but so far!"

seemed to have all the hallmarks of a one-off hit, but it turned out to be an enormously influential record – in fact it arguably had a greater effect on subsequent musical events than almost anything else on this list. In the short term, its urbanely cryptic lyrics and stately church organ sound led to a whole host of imitative (and now fiercely collected) releases by Rupert's People, Shy Limbs (featuring a young Greg Lake), Svensk and Felius Andromeda, whilst also impacting on mainstream hits such as Je T'Aime.

More lastingly, however, it provided the template for the classic/rock fusion that was taken up with varying degrees of bombast by the likes of The Moody Blues, The Nice, ELP and assorted Prog Rockers, and which reached its logical conclusion with 80s projects like Sky and the Hooked on Classics series. Sadly, the runaway success of the song completely overshadowed Procol's subsequent career, which never really received the critical acclaim it deserves.

The singles (not in any order)

Thanks, Charlie, for the typing

Paul Jary writes to BtP from Great Yarmouth in Norfolk:

On 19 February 2007 between 6pm and 7pm on Radio Norfolk, Peter Jay (lives in Great Yarmouth) of Peter Jay and the Jaywalkers fame (pop group from the sixties) was interviewed as part of the What's Rocking Norfolk feature. During the interview he stated that the Jaywalkers in the mid-sixties were booked to back Paul Jones after he had left Manfred Mann, and Peter Jay hired a young organist for the band (Matthew Fisher). He continued that the organist daily played classical music inspired by the composer Bach, one piece of music in particular on a daily basis.

Peter got fed up with this and fired the organist! About a year later Peter was astonished to hear that the same piece of music was a huge hit (AWSoP) and he wished he had used it. Until the recent court case he thought that Matthew was getting a share of the royalties.

Being a PH fan from the sixties I had never heard this story before. Hope this is of interest and maybe you could confirm this story?

BtP replies:
Thanks! We do know the story (see above) though it's not easy to square it with the account of AWSoP's authorship as discussed in court by Gary Brooker or Matthew Fisher.