"A Whiter Shade of Dirty Water"

Well, the Pretty Things are actually just Phil May and Dick Taylor; the Mates, or more precisely the Inmates, helping to fill the gaps left by missing Pretties Wally Waller, John Povey and Skip Allen. And while at the end of 1998 the Pretty Things are in the news all over again, with a live studio version of S.F.Sorrow, featuring guest Dave Gilmour, just released, a new studio album due in March, and a European Rockpalast TV broadcast on the same bill as Van Morrison, this album from 1992 serves as a previous attempt to get back together and do what they do best ... rock. 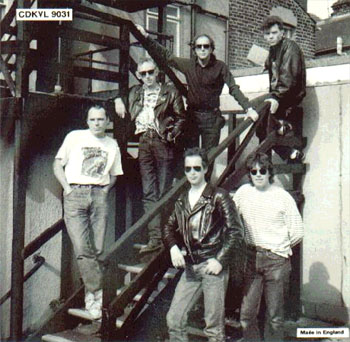 The Pretty Things do what I wish the Stones were doing now. The musical roots are the same but the Things have loads more clout. A Whiter Shade of Dirty Water is an excellent Rock album with a misleading title. It's obvious the title and the addition of Matthew Fisher were ploys to generate interest. So where does that leave our beloved dramatic keyboard player, who continues to this day to give us goosebumps with such wizardry as Grand Hotel and A Salty Dog?

Well, Mr Fisher has thoroughly discarded his Procol Harum uniform and reverted to his personal favourite style. Anyone touching down on his website will read that he prefers the Stones to the Moody Blues. So this tribute to American Garage Rock was the perfect opportunity to leave the Hammond and the strings at home and stretch out on mid-sixties plastic pianos and organs. And he does it to perfection.

High point for Matthew Fisher is the well-known instrumental Red River Rock. Don't know the title? Just wait till you hear the tune ... it's instant recognition. He plays it with great swinging timing, accenting the notes just before the beat, exactly as it should be, and exactly where all the amateurs get it completely wrong. You don't play like this if you don't adore the music! It's hard to be serious about so lighthearted a ditty but Matthew really does pull this off superbly.

On the remainder of the album, of which even the total playing time is definitely retro (35 minutes!), Matthew Fisher plays far away in the background, sticking to functional piano rhythm backing or sixties-style high-pitched organ chords. His fake-suspense electric piano intro on Strychnine is classic, but it's really hard to hear piano or organ on the rest of the track. Dick Taylor is definitely hogging centre-stage here.

96 Tears has the classic sixties Vox / Farfisa transistor organ sound so reminiscent of the Doors and Iron Butterfly. You can almost hear Matthew Fisher smiling on this track...."At last a chance to play this great silly song! And the chords are easier to remember than Homburg".

So if you're looking for a new Pretty Things Rock Opera, with symphonic colour added by the famous Matthew Fisher, forget it. What you get here is a great sounding punching tribute to simple rock music, performed with lust and vigour, which just happens to have our hero playing backing and a few great leads.

If you find a copy, buy it. There apparently aren't many out there, and the collectability of the Pretty Things is set to increase with their current revival. But in truth it's non-essential for Procol Harum collectors. Enjoy!

Re-released as Rockin' the Garage on CD (2008) and mp3 Download (2010)(thanks, Joan).  It's available atAmazon US, fromAmazon UK and probably iTunes, etc.

Many thanks to Bas Möllenkramer, Soest, the Netherlands, for sending this review and album information