Undoubtedly one of the most underestimated of our progressive pop groups are Procol Harum who are about to hit you between the ears with a brilliant new single, Salty Dog and album by the same title.

They might have been regarded as one of the finest of our 'underground' groups had they not made what so many misguided people seem to think is the 'mistake' of a huge commercial hit single, A Whiter Shade of Pale followed by Homburg which was another Top Ten Single. Following these discs a strange kind of antipathy hit the group in Britain - partly due to a few head on collisions with the Press and partly due to the fact the group were musically several years ahead of what was happening here at the time. 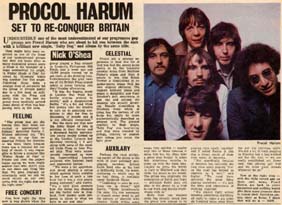 FEELING
"The group just got the feeling that they were not wanted or appreciated in Britain," drummer Barrie J Wilson informed me. It's not true to say that we deserted Britain for America - we went there because there was a demand for our kind of music. It was impossible to follow a monster like Whiter Shade of Pale in Britain and then the papers began saying we were really session men who didn't play on our discs and thing [sic] like that. We gave England up reluctantly until we felt we could return on our own terms with the right disc and the right time.

FREE CONCERT
Just how right the time now is was shown when the group played a free concert in London's Parliament Hill Fields just a week ago (18 May 1969) and 16,000 people turned up to see them in the drizzling rain. Unfortunately the gray morass of the British Press stayed safely at home tucking into their Sunday afternoons.

"It was the largest event in London that week but hardly anyone seemed to notice," said a disappointed Barrie. "It's a bit sad when live groups take the trouble to turn up in appalling conditions to play for free to thousands of people and it is not officially recognised." 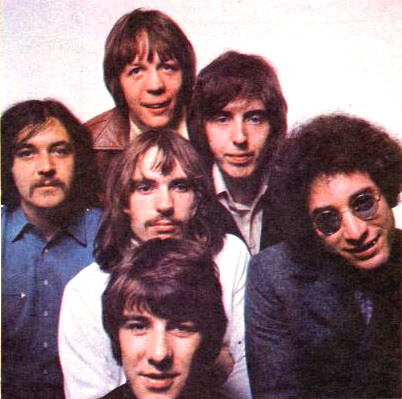 But the signs are that now the fickle finger of fate is pointing in their favour and a thousand highly appreciative young people turned up at the London Lyceum last Saturday morning (3 am) along with some of the musical trade Press to hear Procol play (23 May 1969). They were unanimously impressed as were the hyper-critical London audience who listened hard and applauded harder.

"We were a bit apprehensive about playing a venue which seems more suitable to Joe Loss at such a late hour but it was a very aware young audience," said Barrie. "It's a very good example how the Scene has changed for the better now in England. Now people seem prepared to listen to what we have to say and play."

CELESTIAL
Procol are a strange experience to hear live for at first you feel the strong point seems to be the beautiful celestial tones from Matthew Fisher's organ and then it occurs to you that Robin Trower is languishing in no guitar-giant's image with his own original phrasing. The rapport between piano and organ is delightful and Gary Brooker's deft excursions in and out and around the classical are equally diverting. Equally compelling is Brooker's voice which at times has the texture of old boots but might be more euphemistically described as scraped soul. The general reaction to their single Salty Dog was heartening and they were unaided by strings, mirrors or session men unless you count the light show.

AUXILIARY
Perhaps the most intriguing aspect of the group is the work of their auxiliary non-playing member, lyricist Keith Reid who at his best is brilliantly lucid, his worst, confusing - which may be no bad thing. It certainly never hindered Dylan.

"Confusing - sure he confuses me at times," said Barrie, "Quite intentionally I'm sure. It's not necessary to dissect every word to get the picture or identify with illusion. Keith writes some songs very quickly - maybe only two or three minutes it takes him but his ideas take a great deal longer. It takes him sometimes months to come up with the right idea. Usually he gives the words to Gary or Matthew and they write the music in the words. The group was originally the conception of Keith and Gary - although Keith does not play in the group he is vital to our work and travels everywhere with us."

More than one musical critic has already noted how the group appear to be playing very much 'together' and I asked Barrie if this was a direct result of their time spent in America.

"Not specifically because of America but naturally the long time spent playing 'live' on the road has helped us improve as a unit," said Barrie. "We could have achieved the same thing playing anywhere - it's just the time and experience of working together.

"We played right across America sometimes traveling all night to make a gig some six hundred miles away from the job the previous night. We did a lot of hard slogging in America but it has worked out for the best - we are really established out there now. Our albums sell well and we draw good crowds wherever we go."

Now at the right time - with the right record and on their own terms, Procol Harum are back to prove themselves and nothing would give them more pleasure than to repeat their American success story at home. I think they will do it - NOW.

(thanks, Frans, for extra dates)