is part of the German celebrations

Gary Brooker and Matthew Fisher were in Hannover, Germany, to take part in Thomas Gottschalk's 'Fifty Years of Rock Music' on Saturday 17 April: review of the broadcast is here, and the website for the event is here. The team photo, below, gives some sense of the stellar nature of the event (thanks, Henrik) 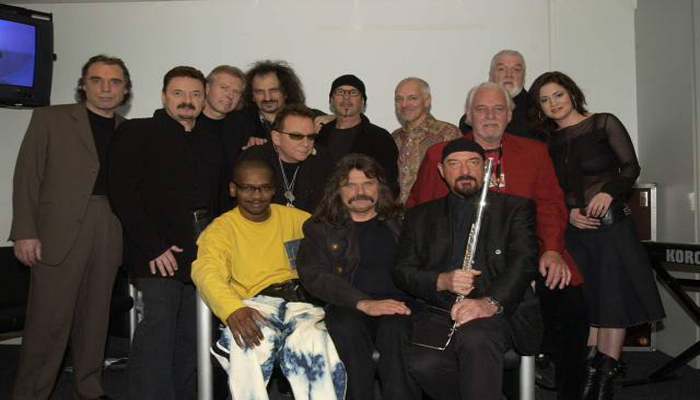 German TV2 (ZDF) will celebrate the fiftieth anniversary of Rock'n'Roll (dating from the release Bill Haley's Rock Around The Clock) on 17 April in Hannover's Preussag Arena. This live event in front of 10,000 people is going to be broadcast live over 150 minutes starting at 8.15 pm local time.

The show will be hosted by Thomas Gottschalk, Germany's TV Caesar (as Gary Brooker once called him): Gottschalk is a great fan of Gary and promoted the Procol tour 1992 and both Rock meets Classic tours in his TV shows.

When I heard that there would be a full Symphony Orcherstra under Eberhard Schoener, I was quite sure that Gary would be on the guest list. This was confirmed at last by the beginning of April 2004. Other artists who are confirmed are Eric Burdon, Ian Anderson, Barry Ryan, Shakin' Stevens, John Kay, Chris Thompson, Bobby Kimball, Jon Lord, Peter Frampton, Jack Bruce, The Comets, Status Quo, The Scorpions, The Rasmus, Reamon, and many more. Among the talking guests are Bill Wyman and Michail Gorbatschow.