Brooker, Dunn, Pegg, Phillips, Whitehorn
If you were able to get to this gig, please send us all your pictures, memorabilia, interviews and so forth! 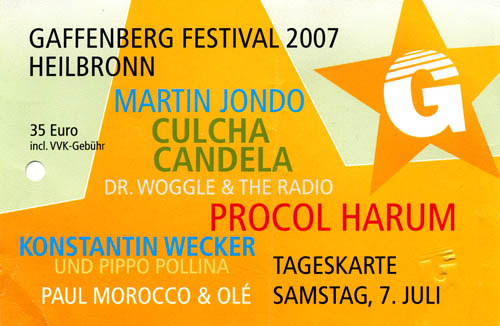 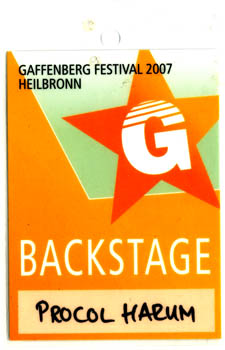 A Rum Tale
Grand Hotel (German waltz Drink Drink – 'these German girls they like to fight')
Simple Sister
The Milk of Human Kindness
Something Following Me ('The first song I ever wrote with Keith Reid for PH, our attempt at the blues' Josh, killer solo: big crowd response. Song has slowed down but what is really impressing so far are the great dynamics every song has taken so far. (And a killer solo from Geoff W). The new B3 Digital is so clear and strong! And the clarity of sound in this tent may be the best overall sound I have ever heard)
Pandora's Box (ending jam with a little Latin flavour)
For Liquorice John (Dave Ball standing with me says 'Just like BJ'! Amazing new bass runs from Matt in second midsection after the heavy Hammond portion)
Seem To Have the Blues (Most All of the Time)
This World is Rich ('I think they are doing earth day, Live Earth, today in Wembley Stadium, Hamburg, Turkey ... and Al Gore didn't invite us. But we're here in Effenberg – uh where are we – Gaffenberg the oldest festival. Here's a big message that some people have too much money and they really don't spread it around: words by Stephen Maboe!' Gary adds Zika nor Nama / Hesah. Song is slow, bluesy)
Whisky Train (after an another amazing drum solo, Ball turns to me and says 'Class act!')
A Salty Dog ('those who love(d) BJ, it's a split second off the beat but on the beat – I think you know what I'm trying to convey!' Absolutely massive and extended ovation)

A Whiter Shade of Pale (Air opening and so on as I've indicated on prior evenings. Gary asks the audience to sing along and carries the melody last time around. And yet another new free-flowing ending with a nice bass run.)