Another bit of Procol cat-lore

Attached is a scan of a postcard from some people at the Cat Show at Madison Square Garden in NYC.

This cattery, according to owner Caroline Scott, is not even twenty years old. It was named for Procol Harum. Caroline does know a smidgen about the band being named for a cat, which she believes to have been a Devon Rex. That's another nice name for a band, isn't it? (Although Devon, perhaps, has too much of the retirement community feel to it?) 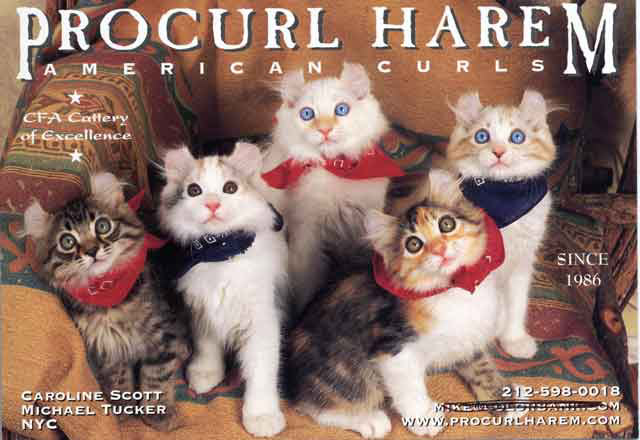 Although she and the cats are in NYC, they didn't even know about Procol's Bottom Line shows, nor about The Well's on Fire. I didn't get to learn anything else, since the object of the cat show (no doubt an expensive exercise to the exhibitors) is to sell kittens and retired champions; and Caroline's booth was suddenly getting very popular no doubt due to the appealing faces of these American Curls.

Caroline and partner Michael Tucker had a couple of larger group images of their American Curls on display on easel boards. Each had the Procurl Harem name boldly across the top. These were very eye-catching. At their booth they also had a mirror logo of the name. Of course, the cats themselves were the best part. They were lively, curious and very pretty!

Caroline writes to BtP, on reading the above:

"Was terrific meeting you at the MSG show and making the 'curlnection' to the band and our cattery name. We were listening to Whiter Shade of Pale and Conquistador on the radio 18 years ago while driving to a cat show, and knew the music made our heart sing ... just like the Curl kitties do. So magically the name Procurl harem instantly was a divine message.

"We think ... anyway ... it has a very nice connotation to it and encourages many people to talk about that time in their lives as well as just loving the music . It makes people remember those days and recall their favorite Harem songs too. We have had people stand by our show cages and actually sing the songs !! (Our show cages are decorated to the nines with plumes, sparkly gold beading to keep with the Harem theme, so it is a rare sight with both things going on).

"We love this name and it is our heritage now along with the band. We are both classics. If it weren't for the original Cornish Rex cat we wouldn't be having this conversation. Good luck to all out there that enjoy the music while playing with their wonderfully affectionate and heart grabbing American Curls ... they are a pair! The combination makes everyone feel good."

The Name of the Cat