Extracted from NME by Yan Friis

These excerpts from New Musical Express, kindly selected for 'Beyond the Pale' by Yan Friis, cover all the Paramounts' press during the first year of their recording career, showing the lacklustre promotion that they received from EMI and the ferocious chart competition they were up against. Included in this page are several reviews of Paramounts' singles. Additional research by Frans Steensma ([FS]). This is part one of a two-part feature.

Main reviews on Elvis Presley's Kiss Me Quick and Paul Anka's Did You Have A Happy Birthday.

They are also reinstalled on that weekly EMI column on the news pages, this time stuck between Mrs Mills (piano) with Orchestra's We're Gonna Throw A Little Party (Y'All Come) and Joe Powers' Midnight Mary.

But Derek Johnson did not give it a mention, silly man.

And that was all the NME (or rather EMI) did on that first single. It never charted there. I guess that's why

On the last page a unique picture of the Paramounts ... with Shirley Bassey

(See also The Pitt Report by Ken Pitt (1985). Part Three, page 1:
Shirley Bassey asked me to find her a group to play at a party she was giving on January 4 so I sent her The Paramounts, who had been playing at the Shades Coffee Lounge, Southend-On-Sea. Two of the boys went on to considerable success: Rob Trower as a seller of albums and Gary Brooker as the singer on Procol Harum's Whiter Shade Of Pale) [FS]

Front page: Full page ad for Tony D And The Shakeouts' Is It True (Piccadilly) 45.

A Derek Johnson feature called Group Sound Comes From All Over Britain does mention The Paramounts - among hundreds of others. Quote:

'... Parlophone's Paramounts, who recently revived Poison Ivy, hail from Southend, which is also the home of Pye's latest protégés, the Monotones ...'

Main reviews by Derek Johnson:
The Rolling Stones, Not Fade Away
The Crystals, I Wonder

On the back of the NME The Roy Tempest Organisation Ltd. ('Europe's largest band agency') has a half page ad name-checking their clients. Under the headline 'Forthcoming Ballroom & Concert Attractions' we find among others: Big Three, Carter-Lewis, Georgie Fame, Fourmost, Four Pennies, Freddie & the Dreamers, Eden Kane, The Kinks, John Leyton, The Merseybeats, The Mojos, The Rolling Stones and ... The Paramounts. 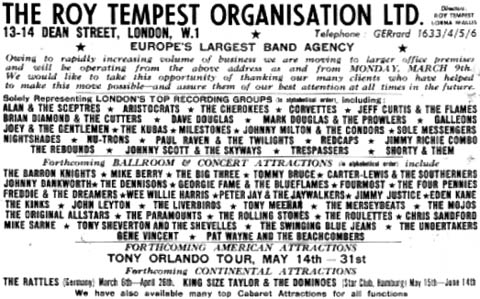 Quite big ad for Little Bitty Pretty One on page 3, but no photo this time.

Main reviews by Derek Johnson:
The Beatles, Can't Buy Me Love
The Bachelors, I Believe

The EMI one-column ad on the news pages:
The Paramounts Im The One Who Loves You (Parlophone R5155) stuck between Margo And The Marvettes Say You Will and Norman And The Invaders Stacey.

On the news pages, a piece on forthcoming Lucky Stars Summer Spin shows on ABC-TV called
BEATLES 'LUCKY' WITH SEARCHERS
The original bill for July 25 has been scrapped. The line-up now consists of Freddie and the Dreamers, Kenny Lynch, Sandie Shaw, Tony Scott, the Interns, Christine Holmes, the Paramounts and Danny Adams and the Challengers, with Adam Faith as compere

And on the 'More Singles by Derek Johnson' page:

PARAMOUNTS
Curtis Mayfields compositions rely mainly on their beaty insistence and soulful feel, and the Paramounts waxing of his Im The One Who Loves You (Parlophone) sure has both qualities, though theres not a very pronounced melody. A pounding twister in the r-and-b style, its a solo-voice showcase with background humming and occasional chanting. The tempo speeds up even more for It Wont Be Long. Mediocre material, lacking the earthiness of the top side, but a competent performance.

Front page: full page ad for The Searchers' Some Day We're Gonna Love Again 45 - and their It's The Searchers LP - both on Pye.

New From EMI ads on the NME Top Thirty page:
The Paramounts, I'm The One Who Loves You, Parlophone R5155, white letters on black, but no photo this time.

Same page also has ads for The Beatles' A Hard Day's Night (with photo), The Barron-Knights' Call Up The Groups (with photo) - and the Decca ads on same page: The Rolling Stones' It's All Over Now (with photo) and PJ Proby's Hold Me (with photo).

Then, surprise surprise, quite big ad (the whole bottom of page 11) for Paramounts / I'm The One Who Loves You with cut-out photo of each member's head - all smiling.

(Placed just above this is a striking ad for Screaming Lord Sutch' new 45 (with the tempting words 'Horror + R & B') - the Lord pictured with exploding hairdo and screaming mouth.)

Derek Johnson's main review: It's For You, Cilla Black

Ad for The Paramounts single on the NME Top Thirty page

And maybe I should mention that all the main booking agents / companies have their weekly ads on the second to last page of the NME. There has been one ad for weeks now (and for weeks to follow) that states the following:

Galaxy Entertainments, 62 Oxford Street, W.1 are 'solely representing' The Paramounts, The Outlaws, The Prestons, Gene Vincent, The Druids, The Problems. (On October 23, 1964, The Problems disappears from the ad, their place taken by the not-so-famous The Blobs, as shown below. On November 27, 1964 the list is extended with The Wayfarers.)

And the NME keeps ignoring The Paramounts. They show much more interest in Brian Epstein's new signing, The Rustiks. Whatever happened to The Rustiks?

Main reviews by Derek Johnson:
Is It Because, The Honeycombs
Sha La La, Manfred Mann
Any Way You Want It, Dave Clark Five

And at last some Paramounts stuff. Derek Johnson reviewing their new single:

By now it is obvious that EMI has lost their faith in The Paramounts. Advertising is down to a minimum.

What is more strange is the fact that the NME never mention them on the news pages, not even in those small snippets where they put an endless list of unknown bands being on tour around in Britain.

Every week NME mentions at least one hundred different names (like The Hummelflugs; remember them?) on the two news pages. It is as if The Paramounts doesn't exist - or never play live.

In the NME Poll winners for 1964 (published on December 11, 1964, The Paramounts only would have needed 142 votes to catch the No. 15 spot in British Vocal Group-section. They didn't.

So leaving 1964 (The Beatles' I Feel Fine topping the charts) the future certainly looked grim for The Paramounts.