The Man Behind Procol Harum ...

Keith Reid tells about the facts and people of Procol Harum ... 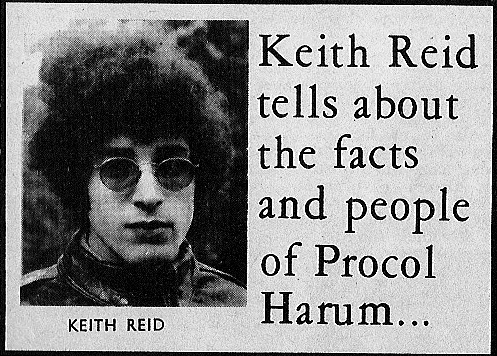 Keith Reid. The man behind and always with Procol Harum – that fantastic group who have stormed the charts with their very first record (topping the charts in many countries, and already racing up the American Hot 100). Personal Manager – integral part of the group – his whole life revolves around them.

I went along to their recording session the other day – (incredible. All I can say is that when the sounds they were taping are released, everyone is going to be so knocked out – really, these boys are capable of so much) – and spoke to Keith. I wanted to get a clear story of what Procol Harum is all about. Their rise to the top has been so fast, and there have been so many stories written bout them, that the 'Procol Harum Story' is about as clear a bottle-full of 1953 London Smog. Anyway, here are the facts.

In the beginning there was Keith Reid. And Keith wrote words – not lyrics particularly, nor poetry. Just words. Then nine months ago he met Gary Brooker, who was lead singer with the Paramounts. Gary set the words to music.

After they had written a few songs together, they found that they didn't want to just let the songs be published, and used by any old body. They wanted to be involved in the whole concept of the presentation – so they decided to gather round them a group of musicians of like mind, who would work with them and present the material themselves. They found that the numbers changed – everyone contributed something, and what started off as words set to music turned into a complete piece of music. Then Keith wrote the words for A Whiter Shade of Pale (this was about six weeks before the record was released), which the group worked out completely, and recorded. Just before their record was released they did their very first gig – at the Speakeasy club. Then Whiter Shade hit the shops. Then ... you know the rest. With sales of over half-a-million in Britain alone, the disc has become Decca's fastest selling single of all time. 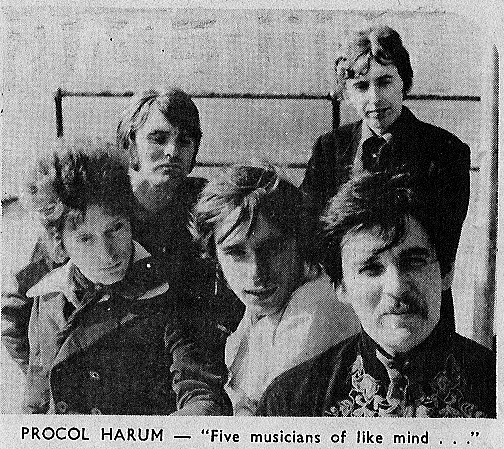 Character Sketches
That is the story of Procol Harum. And the people involved? I asked Keith to give me some quick character sketches of the group.
Gary – vocals and piano – ex-Paramounts. 'Gary is very introvert. He has a very strong personality, and he's a very strong musician – with a lot of belief in himself and his work. I don't know whether he is particularly influenced by China (as someone had said he was) – this Oriental thing just snowballed. First he had an Oriental shirt – it looked good, so he bought a robe, and so on, until he appeared on television the other day wearing a pigtail!'

Dave – bass guitar – 'Dave is a mystery. He's surrounded by fog all the time. None of us know where he's at – he's always with us, but seems apart from everything somehow. Very strong musically – and a fantastically original bass player. An integral part of the group'.

Loud extrovert
Bobby – drums – 'Bobby used to be singer with the Powerpack. He's a loud extrovert – he stops everyone from taking themselves too seriously He was the last to join Procol Harum, and really made a very strong impact. We'd had lots of drummers before, but none of them really clicked. Bobby was the first who was capable of playing with us.' 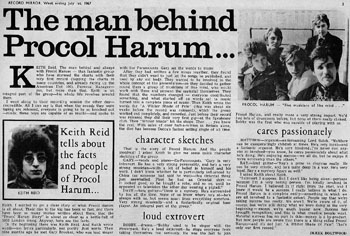 Cares Passionately
Matthew – organist – ex-Screaming Lord Sutch. 'Matthew can be exasperatingly childish at times.. He's very loyal – and a fantastic organist. He's very involved. I've never met any one so involved – you know, he cares passionately about what he's doing. He's enjoying success – we all do, but he enjoys it more noticeably than the others.'

Ray – lead guitar – 'Ray's a pixie in disguise really. He can be very erratic, and he's quite deep in a way. He's very loyal. Ray's a mystery figure as well'.

I asked Keith about Keith.

'Introvert I suppose. But I don't like being alone – perhaps because I've a very boring person. I'm totally involved in Procol Harum. I believed in it right from the start, and I knew it would be a success. I really believe in what I do. Procol Harum is a complete entity – something in which we are all involved to a fantastic extent. People say that we're taking success too coolly. We aren't. We're aware of it, of course, but we're still doing what we were doing at the very beginning – except we're much busier now. Success has brought recognition, and this is what creative people want. Material success has no part in this – money is a by-product. But now people are aware that there is a thing called Procol Harum – and it's not just A Whiter Shade of Pale. That's only our first record.'

Back to the index to Procol Harum in Record Mirror