These excerpts from New Musical Express, kindly selected for 'Beyond the Pale' by Yan Friis, show Grand Hotel hitting the shops, and the band hitting the spot in concert; meanwhile Robin Trower makes his solo début.

Nothing much to quote from this issue. Except that Procol Harum is back in the annual points table, based on the weekly NME Top 30 singles.

They are also mentioned in the Teasers column:

...O.K.. Tony Secunda not connected with Wings - nor the Move, Procol Harum, the Moody Blues or T.Rex...

And I would have expected Procol Harum to do a nice comeback in the annual NME readers' poll, published January 27. They did not. Not mentioned anywhere at all.

Procol Harum major tour and new album
Procol Harum are set for a major British concert tour in March, taking in 12 cities and coinciding with the release of the group's new album. The tour schedule for Harum, whose last British appearance was a sell-out at London Rainbow last September with the Royal Philharmonic Orchestra, is: 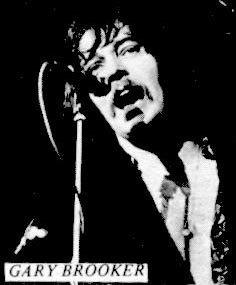 Harum's new album Grand Hotel is the follow-up to their best-selling Gold LP Live With The Edmonton Symphony Orchestra. It has taken six months to complete at the AIR London studios, and cost over £25,000 to make. It also marks the recording début with Harum of new guitarist Mick Grabham, who joined the band from Cochise to replace Dave Ball.

The album will be packaged with a special 24-page booklet, containing illustrations and the lyrics of the nine new songs on the LP penned by Gary Brooker and Keith Reid. It will be released by Chrysalis on March 2

And on page 35, big ad for forthcoming Procol Harum tour:

Robin Trower : Man Of The World (Chrysalis).
Ex-Procol Harum guitarist makes his solo début on this 45 produced by Matthew Fisher. It has a unique feel and the vocals and guitar are particularly effective. Cop a listen.

Procol: book a room now: Procol Harum: Grand Hotel (Chrysalis)
There are swirling skirts, fat pigs with cigars gluttoning themselves and one of those romantic violinists leaning over your table as you scoff your Dover sole at the Hotel Grand. All this and more is conjured up in the title track of this album - which I'll tell you now is a masterpiece of musical perfection and lyricism.

Writer Keith Reid excels himself with the words. There's the nostalgia of Grand Hotel, the pathetic sadness of Toujours L'Amour, a gentle poke at the social disease picked up as a Souvenir Of London, and an obtuse reference to the suicide of Liquorice John.

Reid is subtle, not only in his subject matter but in his compositions, which range from using rhyming couplets to grand poetry. 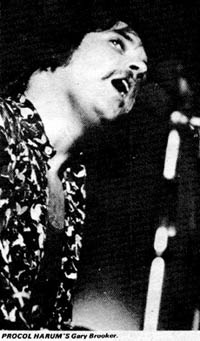 And then there's the music. It doesn't take the form of orchestrated epics as on Live At Edmonton, but has more variety. There are the strings, and yet these fall back to allow the heart of the band to come over.

Sometimes, as with Bringing Home The Bacon, the music is rock, with hard piano chords as accents. Then it'll turn to a quiet, beautiful melody on Fires, with the wonderful voice of Christianne Legrande skipping daintily behind Brooker's piano phrases while Chris Copping's organ hangs in the air.

You can remark on the command Brooker holds as vocalist, with a texture so suited to the different moods, but it's a difficult task to try to dissect the instrumentation, because it comes over as one.

BJ Wilson may seem to be timekeeper, but always the flourishes of dexterity are there, with Alan Cartwright's bass gingerly picking out the threads.

Rather unfortunately, Mick Grabham - who's come in on guitar - tends to be lost too often, until his breaks. And this again brings in only a minor criticism, that Procol tend to follow the same patterns of arrangements too often. The piano intro, two verses, then the break - the result being a little predictable.

Yet how in any way could an album of the quality of this one be put down? Surely we'll even forget about the chord progression into the chorus of Grand Hotel being similar to Whaling Stories. Why don't you book your room with Procol now?

More reviews of this album here

Main single reviews by Charles Shaar Murray
The Right Thing To Do, Carly Simon
Giving It All Away, Roger Daltrey
Cold Blue Steel And Sweet Fire, Joni Mitchell
Power To All Our Friends, Cliff Richard
Will It Go Round In Circles, Billy Preston

PROCOL HARUM / BIRMINGHAM
The changeability of the British musical opinion has, rather sadly, resulted in beautiful bands such as Procol Harum being somewhat neglected.

Perhaps Procol are a cult group whose followers remain devout and yet, as the turnout at Birmingham Town Hall on Wednesday illustrated, a little thin in numbers. A mite peculiar when one recalls the success of the Live At Edmonton set, and the chart notch with Conquistador. Glorious days.

Their recordings do not deserve ill-mannered rebuffs by rock fans here. Furthermore, their stage performances now hum with emotion, streaks of brilliance and genuine art. This gig, their fourth on the present tour, was certainly no stormer. Nor did it quite hit the zenith much of the music inferred [sic] possible. A shame, but it was still good.

More than that. For those who studiously follow live performances, the gig contrasted their former selves with the new material of Grand Hotel. And although Gary Brooker may not agree, it tended to revolve around subtle complexities with a sometimes humorous lyrical insight to the mind of Keith Reid.

Frankly, some of the new set numbers - which I believe they've included for some time - seemed uncomfortable in structure - such as the almost spoken Toujours L'Amour.

To me the title track Grand Hotel and Bringing Home The Bacon work better. The former is interesting and humorous in places, and the latter - which followed the first number of the night, Shine On Brightly - varying in time and key changes, spurred by the magic percussion work of Barry Wilson, complemented in the jaunt with some delightful splurges of Alan Cartwright's bass. Yet even the empty spaces are used effectively to provide a blend of basic simplicity and exacting instrumentation.

Repent Walpurgis was later an apt ending to the show, which resulted in two encores: Kaleidoscope and Whiter Shade Of Pale. Which caused one young gentleman to leap up, thrust out his arms with round blobs of clenched fists and throw his head back.

The emotion didn't quite hit me the same, but, still it was a more-than-satisfying gig.
Tony Stewart 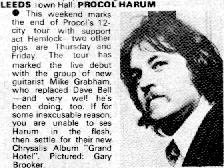 Leeds Town Hall: Procol Harum
This weekend marks the end of Procol's 12-city tour with support act Hemlock - two other gigs are Thursday and Friday. The tour has marked the live début with the group of new guitarist Mike [sic] Grabham, who replaced Dave Bell [sic] - and very well he's been doing, too. If for some inexcusable reason you are unable to see Harum in the flesh, then settle for their new Chrysalis album Grand Hotel.

And finally in this Procol Harum-packed issue: 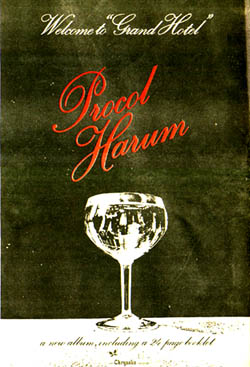 The last page, a full page ad for Grand Hotel.