These excerpts from New Musical Express, kindly selected for 'Beyond the Pale' by Yan Friis, show the wonderful reaction to the A Salty Dog album, and a rare Procol cover released on 45 rpm.

NMExclusive Nick Logan sees JETHRO TULL off at start of two-month AMERICAN tour
Almost at No.1, but...
SUCCESS HAS COME HONESTLY - WE'RE NOT A BIT ASHAMED
says IAN ANDERSON

Tipped for the charts by Nick Logan
Robin Gibb, Saved By The Bell
Donovan and the Jeff Beck Group, Goo Goo Barabajagal (Love Is Hot)

First he was an actor, then a SINGER who couldn't get work so he became a PRODUCER, today he's the STAR of FAMILY DOGG. His name? STEVE ROWLAND. FAMILY DOGG: THE GROUP THAT HAD TO SUCCEED
by Gordon Coxhill

The most exciting facet of this tremendous album is not so much that it contains the Procols' best recorded works to date, but that their potential is still nowhere near being fully spent.

If this is an example of what their experiments can lead them to, long may they continue to push out past the accepted frontiers of pop.

It would be hard to pick a stand-out but the title-track, also their current single, must rank as their most potently commercial offering since Whiter Shade of Pale. The poetic quality of Keith Reid's lyrics delivered by Gary Brooker against music that rises and crashes like the waves adds up to a positively stunning track.

Brooker takes five other writing credits; Milk of Human Kindness is a personal favourite, mainly for its gorgeous razzy guitar. Too much Between Us, which he co-wrote with Robin Trower, is wispy and dreamy with shades of Incredible String Band in the harmonies. The Devil Came from Kansas has a distinct country feel with Barrie Wilson's powerful drumming behind a piano running rife. All This and More is nearer the old Procols.

Boredom, by Brooker and Matthew Fisher, has the latter featured strongly on marimba with a pretty calypso lilt making it one of the most appealing songs.

Fisher on his own has two entries, stand out being Wreck of the Hesperus with a complex arrangement for piano and strings that spins like whirlpools of water and has a charm and prettiness little found in today's pop.

Full page Polydor ad, given half the page to Yes's Sweetness 45, and the rest to
Aphrodite's Child's I Want To Live
The Easybeats' St. Louis
Robin Gibb's Saved By The Bell

'COOL IT', SAID JAGGER, AND THEY DID
by Nick Logan
(review of the Stones in Hyde Park) 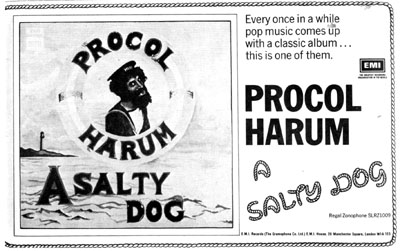 Half page ad:
Procol Harum's A Salty Dog album showing the sleeve and the following words:
Every Once In a while pop music comes up with a classic album ... this is one of them.

Tipped for charts by Derek Johnson
Bob & Earl, Everybody Jerk
Diana Ross & The Supremes, No Matter What Sign You Are
Tommy Roe, Heather Honey