These excerpts from New Musical Express, kindly selected for 'Beyond the Pale' by Yan Friis, show Procol booked to play important festivals both sides of the Atlantic, and some ecstatic reaction to Home, which charts in the USA.

SEXY? IT'S ALL A BIT OF A GIGGLE
says ZEPPELIN'S ROBERT PLANT
by Roy Carr

ZAPPA
SHREWD, BUT WITH A LOT OF HEART

A bass player objects to being ignored by TV cameras
That's John Entwistle of the Who.
He told his troubles to NME's Richard Green
I NEARLY QUIT TOP OF THE POPS

(My comment: Surely an error - the group was in the U.S.)

Headlines:
HAS JETHRO'S PATH BEEN SELF-DESTRUCTIVE?
If as predicted they tour here in October. It will be a YEAR since their last gig in Britain
by Nick Logan

Fans are out front - but that's only the tip of the iceberg...
BACKROOM TEAM MAKE CREEDENCE ELEVEN STRONG
by Roy Carr

Tipped for charts by Derek Johnson
(none)

Big Radio 1 line-up for next fortnight
(excerpt)
SOUNDS OF THE 70's: Procol Harum and Storyteller (next Monday ,13)...

Procol head for No 1
For the past couple of weeks I've been listening to an album by Procol Harum called Home. The more I play it, the harder it is to believe it. I'm really convinced that this album, the fourth by Procol, is just about as historic a landmark as Sgt. Pepper was. It's definitely one of the finest albums produced in the past few years, and far and away the best that Procol has done.

Home won't be released for another couple of weeks, but when it is, I'm sure it will go straight home to No 1.

The album is being issued to co-inched with the group's current tour of North America. Last week, the band played a gig before 38,000 (yes, folks, 38,000) kids at Montreal's Man and His World.

While they were there, I called Gary Brooker - the group's singer-pianist-composer, to pass on congratulations.

'I wouldn't say Home was like our last album, A Salty Dog,' Gary said, 'but it is a natural LP after Dog, if you know what I mean. If you heard it, you'd immediately know it was Procol at it again.'

The new album features one new member and a transition for an original member. Chris Copping is the new bass player (and you won't believe the things he gets going with the drummer, Barrie Wilson) and resident poet, Keith Reid, is now playing organ. 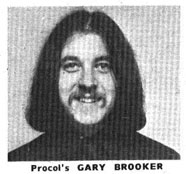 The group sound hasn't changed noticeably, except that it is better and tighter than it ever was. 'The most influential thing about Procol is the songs,' Gary explained, 'everyone in the band works around that. Even if we had completely different musicians, I think we'd still sound like Procol Harum.'

I think that Home is better than either of the two Band albums, and there is basis for comparison. Both utilise strange little quirks of harmony, complicated melodic structure, and tight backing. But emotionally, Procol comes off well in front.

It is a great, great pity that so many English pop fans still look on Procol as the group that had A Whiter Shade Of Pale, and nothing else.

As magnificent as Pale was, even it looks a little pale next to some of the new Procol things. If someone asked me who was the best group in the world right now, I'd have to say Procol Harum. And that's no light-hearted endorsement.

KNOCKED OUT
by John Wells

Focus on a Creedence a week
MEET COSMO!
by Roy Carr

PICKETTY FEARED BEING A ONE HIT WONDER
I don't mind sharing a dressing-room with the boys, but I liked to be asked first says POLLY BROWN
by Gordon Coxhill

Tipped for charts by Derek Johnson
Jackson 5, The Love You Save

The AlterNation Rock Festival 'Strawberry Fields' takes place in the Canadian New Brunswick province of Moncton for three days from August 7. Artists booked include Led Zeppelin, Procol Harum, Eric Burdon and War, Delaney and Bonnie, Sly and the Family Stone, Leonard Cohen, the Youngbloods, Grand Funk Railroad, Cactus, Melanie and Mountain. The event will run each day from low to high tide - on a sandy beach where the tide goes out 1 1/2 miles!

Tipped for charts by Derek Johnson
Supremes, Everybody's Got The Right To Love
Kenny Rogers & The First Edition, Tell It All Brother
Frijid Pink, Sing A Song For Freedom

THE LAST OF THE BIG FESTIVALS? 'COULD BE!'

Jethro Tull, Ten Years After and Procol Harum have been added to the line-up of this year's Isle of Wight Festival. It will be Jethro's first British appearance since last October. Other new bookings include Melanie, Fairfield Parlour, Cactus, Ralph McTell and a 30 piece Negro spiritual group named the Voices of East Harlem. The Saturday evening performance (August 29) is to be telecast in colour, live via satellite, to selected theatres and cinemas throughout the United States and Canada...

AMERICA CALLING
IN THE U.S. FESTIVALS ARE OUT
by Ritchie Yorke

(excerpt)
...The only hope left is in the 'Strawberry Fields' gala, to be held on an 850 acre site at Moncton, New Brunswick (in Canada) on August 7, 8 and 9, featuring Led Zeppelin, Leonard Cohen, Procol Harum, Grand Funk Railroad, Delaney and Bonnie, Mountain, Jethro Tull, the King Biscuit Boy with Crowbar, Ten Years After, Eric Burdon and War, the Youngbloods and Sly and the Family Stone ...

EASY LIVING FOR MOODIES IN SURREY SUN
by Richard Green

HOW CAT FOUGHT OFF THOUGHTS OF DEATH
by Alan McDougall
(Cat Stevens, that is)

Revolution and the Broughtons
by Nick Logan

Tipped for charts by Derek Johnson
Tom Jones, I Who Have Nothing
Bob Dylan, Wigwam
Jimmy Cliff, Wild World

(excerpt)
...Canada's giant AlterNation Rock Festival, which is taking place during the three days of this weekend, has moved its site at the last moment to Toronto's Mosport Park. It had originally been planned to stage it on the 1 1/2-mile-wide beach at Moncton in New Brunswick. Among artists taking part are Jethro Tull, Led Zeppelin, Ten Years After, Delaney and Bonnie, Eric Burdon & War, Sly & the Family Stone, Procol Harum, Leonard Cohen and Melanie...