These excerpts from New Musical Express, kindly selected for 'Beyond the Pale' by Yan Friis, show setbacks for Procol Harum as a showcase London gig is re-scheduled in the provinces, and a highly-uncharacteristic 45 is banned by the BBC.

Procol date at Croydon
Procol Harum play their only concert in the London area this year when they headline at Croydon Fairfield Hall on Sunday, July 15 It will be their first appearance in the London district since they played the Rainbow Theatre last September. The group are scheduled to return to Britain next week following a nine-week American tour.

Main singles reviews by Nick Kent:
I'm Waiting For The Man, Lou Reed & Velvet Underground
Life On Mars, David Bowie
Such A Night, Dr. John
Get Down To It, Humble Pie
The Answer (Should I Tie a Yellow Ribbon Round The Old Oak Tree?), Connie Francis
Numbers (Travelling Band), Alan Hull
Wouldn't I Be Someone, Bee Gees

Main album reviews:
Fantasy, Carole King
Home Thoughts, Clifford T. Ward
Where Are You Now My Son?, Joan Baez
Skywriter, Jackson Five
Masterpiece, The Temptations
Never Turn Your Back On A Friend, Budgie
Oora, Edgar Broughton Band
Neither One Of Us, Gladys Knight & The Pips
A Wizard, A True Star, Todd Rundgren
A Woofer In A Tweeter's Clothing, Sparks
Mudanzas, Stray

Procol date cancelled
Procol Harum, whose London Palladium gig was originally scheduled for August 19, have had the concert cancelled by the venue's management.

A Chrysalis spokesman told NME that no explanation had been given by the Palladium - but later statements by Moss Empires, who control the Palladium's booking, revealed that the theatre has been made unavailable to Procol "because we require it for our own purposes. I'm afraid there has been a slight misunderstanding."

This week Procol rush-release a single, Souvenirs [sic] of London, which is culled from the Grand Hotel album.

New Procol date
Following the cancellation of their projected London Palladium concert, Procol Harum are now set to appear at the Brighton Dome on Monday, August 20. They will be supported by new Chrysalis signing Leo Sayer, composer of the recent Roger Daltrey hit Giving It All Away. Harum's new single Souvenir Of London is released this week.

BEEB BANS NEW PROCOL SINGLE
Procol Harum's new single A Souvenir Of London, released by Chrysalis last week, has been banned by the BBC. As a result, it has now been decided to make the record a double A-side release, in the hope that Harum will secure some airplay on what was formerly the 'B' side, Toujours L'Amour.
The offending track was penned by Gary Brooker and Keith Reid, and comes from the group's Grand Hotel album. Reid said this week: "I can't understand the BBC's objection. The song is just about a young man's adventures abroad, and is certainly not distasteful."

A spokesman for Chrysalis admitted that the lyric might be construed as referring to venereal disease, but pointed out that any such interpretation was in the mind of the listener. "VD is not mentioned anywhere in the lyric", he added.

PROCOL HARUM: Souvenir Of London (Chrysalis)
Taken from Harum's recent Grand Hotel album, this has already been banned by the BBC. Its lyric refers to a well-known disease second only in popularity to piles. Gary Brooker sings about his gain over an acoustic guitar and bass drum backing. It's the kind of music I'd expect to hear a busker sing outside a Leicester Square cinema. Not one of Harum's best and not the stuff dreams are made of. A pox on you. For those who can spot the Shakespearean allusions send SAE to ... 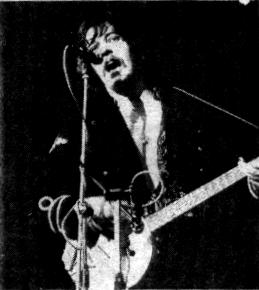 Procol Harum don't exactly outwear their welcome on the British gig circuit, but they're beginning to play a few more dates now. They had hoped to re-establish themselves in a big way with a London Palladium concert, but the project had to be scrapped due to the venue's current policy towards rock bands. So instead, it's down the A23 to bracing Brighton. And they're supported tonight by Leo Sayer, composer of Roger Daltrey's recent hit Giving It All Away, who has just been signed to a recording contract by Chrysalis. Pictured: Harum's Gary Brooker. DJ (Derek Johnson)

And then, let's hear it for a quote from Steve Clarke's Robin Trower interview, TROWER POWER:

... Trower played with Procol Harum for their first three [sic] albums, although he hadn't joined when Whiter Shade Of Pale was recorded. I remember reading a review of the first Harum album which raved about Trower's playing on Gates Of Cerdes, and that was quite a few years ago.

"It's not that I was restricted with Procol Harum; the point was that I was playing other people's music. I just wanted to play music that I was more at home in, which is more blues-based. I'm not doing straight 12-bar blues, but that's the music I really dig to listen to." ...