These excerpts from New Musical Express, kindly selected for 'Beyond the Pale' by Yan Friis, show Procol Harum playing some much-needed British dates, but their 'half-hearted' single has pub-rock and the likes of Bohemian Rhapsody to contend with.

Don't despair ... If Tina Turner can do it so can you (big pic of Tina)
Knives out at BBC as Oldfield row flares
The Report, Pub Rock '75

Procol Harum headline a short British concert tour, starting late November. Six dates have so far been confirmed, but it is expected that one or two more will be added.

Just back from their latest visit to America, Harum tour Scandinavia from November 7 to 20. Then immediately following their British gigs, they play concerts in France, Holland and Belgium. A spokesman said this week that plans are being laid for the band to undertake a more extensive British tour in the New Year. Meanwhile, their new single Final Thrust - taken from their current album Procol's Ninth - has been released this week. It is on the Chrysalis label.

I don't care how much Gary Brooker denies it, the last few P. Harum albums have sounded particularly re-cycled because he and Reid have a tendency to structure all their songs the same way. The Final Thrust is set in classic dance time and sounds like classic 'B' side material, i.e. half-hearted. Worse still, the hole has been drilled off centre making the mellotron sound extremely sick.

Homburg, desipte its initial spurning as follow-up to Whiter Shade of Pale, is a much stronger song.

Half page ad for The Final Thrust. 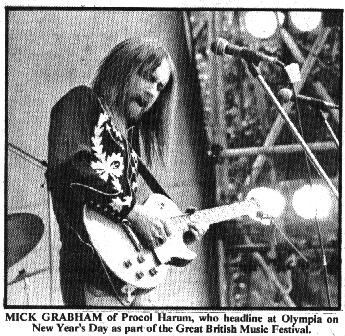 (excerpt)
A series of major rock concerts is to be staged in London's giant Olympia Grand Hall at the turn of the year, under the banner The Great British Music Festival ...

Procol set concerts in New Year
Procol Harum, who set out at the end of this month on a short university tour, are to undertake a major concert tour at the beginning of the New Year. 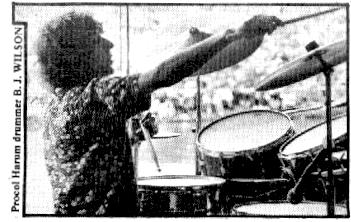 As reported last week, they are set for a headlining appearance at London Olympia on New Year's Day as part of the Great British Music festival, and promoter Adrian Hopkins of Chrysalis has now confirmed the band for a string of provincial dates.

They play Bristol Colston Hall (January 3), Cardiff Capitol (4), Portsmouth Guildhall (5), Middlesbrough Town Hall (7), Nottingham Albert Hall (8), Birmingham Town Hall (9) and Oxford New Theatre (11). There is a strong probability that at least one more date will be added to this itinerary.

Immediately after playing these dates, Procol fly out to begin the second half of their European tour - visiting Germany, Austria, Switzerland and Yugoslavia. They have also been invited to play a series of concerts in Poland, which they are considering favourably, since it is an unusual territory for a rock band to visit.

Patti Smith, Horses
Eno, Another Green World
Queen, A Night At The Opera
Supertramp, Crisis? What Crisis?
Neil Young, Zuma
Rory Gallagher, Against The Grain
Renaissance, Scheherazade And Other Stories 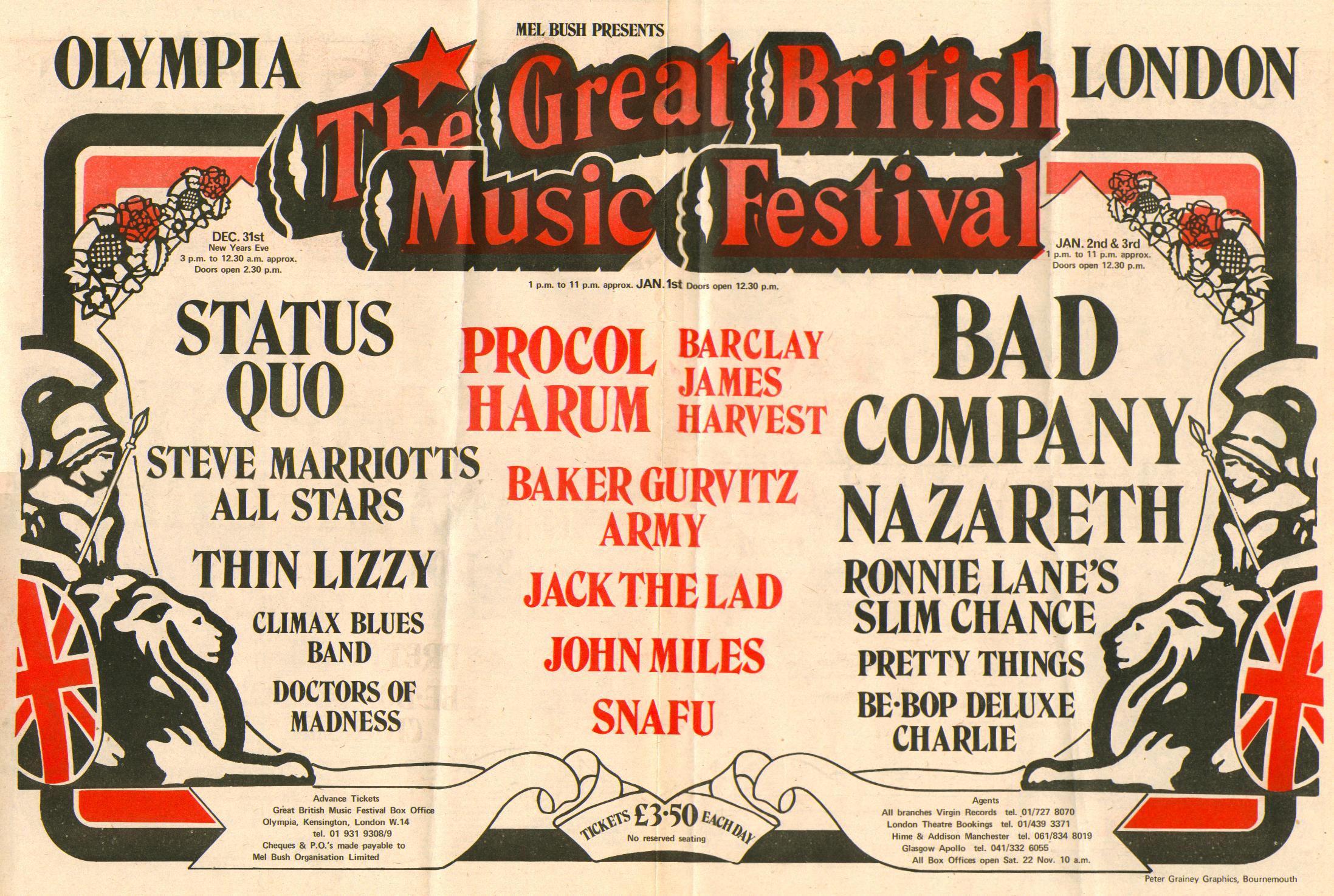 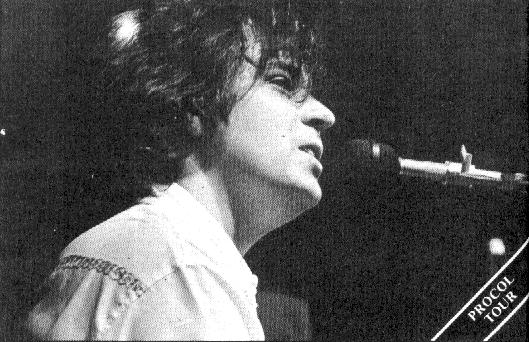 Procol Harum are another band who don't believe in outwearing their welcome on the British stage. So it's a rare occurence to find that they're playing short concert tours both before and after Christmas. The first leg of their travels opens on Friday in Southampton, then visits Leicester (Saturday) and Tunbridge Wells (Tuesday). Catch them while you can, because it's not very often you get the opportunity of seeing Procol performing live on stage.

Christmas approaching, and Chrysalis does a round of teaser-ads on all their main album releases of 1975. Procol's Ninth being one of them. 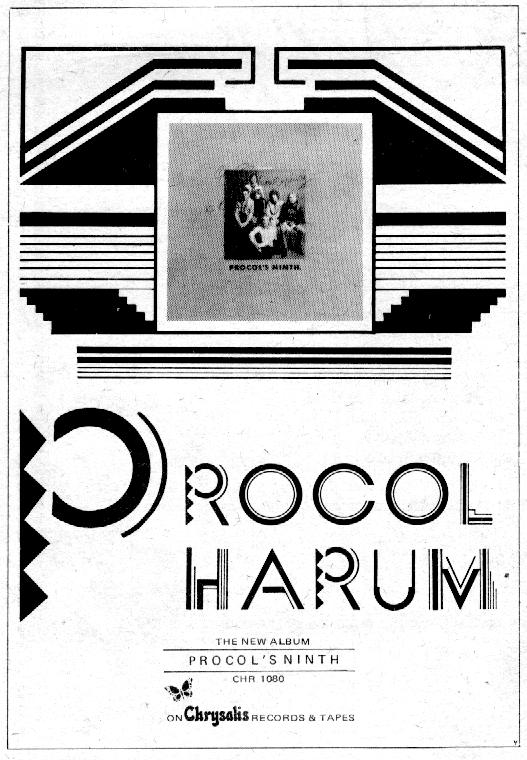 The NME staff names albums of the year, Bob Dylan's Blood On The Tracks winning. Procol Harum is nowhere to be seen, of course, although Steve Clarke at least mentions the album among some of those that didn't make his Top 10.

Another ad for The Great British Music Festival. 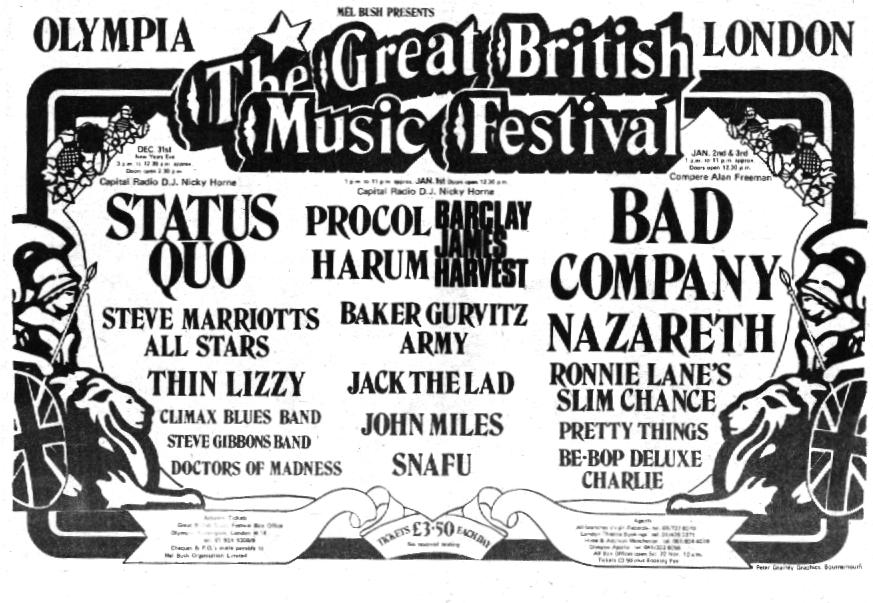 So that was 1975 then, and we can all see where our heroes are heading. They blew it in '74. A good album, but badly timed concert tours. In 1975 everything was well timed, but the album was simply not very good. I sense both disillusion and desperation in that interview Brooker and Reid gave the NME.

And while Procol Harum had made what must be their worst album ever, the music scene in the US and Britain was rapidly changing.

Patti Smith had arrived. The pub rock scene in Britain was giving birth to loads of the following years' new wave and punk acts.

And then there was Bruce Springsteen, and Dylan's comeback, and Bob Marley.

For the first time in their career, Procol Harum seemed left behind.

Another thing. All through the years, from '63 and well into the 70s, the NME had regular columns (under changing names) where current stars listed all their favourite bands and singles and songs and so on. Never once did I see anybody mention Procol Harum. Now that is a mystery to me ...