These excerpts from New Musical Express, kindly selected for 'Beyond the Pale' by Yan Friis, show Pandora's Box assailing the charts: meanwhile a mocking interviewer draws an unsurprisingly abrasive, if very revealing, performance from its authors; and there are mocking captions, and a mocking teaser.

Welcome to my armpit: Alice without malice (big pic of Alice Cooper and his armpit)

Pandoras Box never got a proper single-review, but it was included in the following column

Quick Before They Vanish: Singles overview
by Angio Errigo 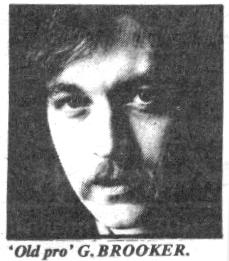 (excerpt)
Climbing smoothly is Pandoras Box by Procol Harum. This bid for fresh chart success is from the bands latest album, Procols Ninth, their most carefully tuneful contribution in some time. A hypnotic theme and Gary Brookers better-than-ever voice should carry the bizarre poetic imagery that marked the classic Whiter Shade Of Pale into the Top Ten if it gets enough airplay

Bob Marley & The Wailers, No Woman No Cry / Kinky Reggae ( "it stirs racial memories of both Percy Sledge and A Whiter Shade Of Pale.")
Wings, Letting Go
Art Garfunkel, I Only Have Eyes For You
David Essex, Hold Me Close
Jefferson Starship, Miracles
Four Seasons, Who Loves You
Paul Simon, Gone At Last

Pete Erskine hard on the heels of the elusive Harum.

Chrysalis having at last divined a Procol Harum fan on NME a year or two back offered our freshly-arrived Andrew Tyler the chance of an interview with Brooker and Reid. However, as the momentous encounter drew nearer Tyler suddenly backed off into the relative security of a Lookin Back.

Likewise, our proposed first encounter  something I felt sure might yield something of interest providing I did a little preparatory homework  was delayed by the sudden onset of psychosomatic diarrhoea in the Erskine person.

Distant impressions of the Procol character seem to be confirmed when it turns out that Brooker has the oppressive, latently homicidal persona of Triple Echo period Oliver Reed  and Reid (Keith, that is) closely approximates an old school friend who once tried to seduce me on a Bournemouth caravan site.

My only solace is that I can truthfully relate that the following actually did take place "high above Londons bustling Oxford Street" and, better still, in "their managers office" (replete with the usual beercan / swivel chair props and, most aptly, a punchbag on a spring-mounted stand).

Why the paranoia? Well, I suppose its down to appearances; the content of the music (especially Reids lyrics) appears intimidatingly weighty, deserving of microscopic analysis but somehow off-putting, cold and uninviting. Brooker appears to be one of those who does not suffer fools gladly. And to him the music press are fools to a man.

Not that theyve ever really had any bad press.

Maybe its that old thing about Procol Harum being 'elusive.

"Yeah, the first paragraph of every article ever written about us opens with 'Its difficult!'" Reid retorts acidly. "Well," he continues, "if its difficult you have to try and do it; its no use saying 'it is difficult therefore Im going to ask the same questions."

"Either its 'Procol Harum the underrated group," says Reid, "which is such a complete bore to read. I mean I cant stand reading that any more.

"Were not that big in America. Were as big in ten other bloody countries."

Yes. Well theres nothing about the band that seems to offer any kind of welcome. For a start the lyrics are too imposing.

Brooker turns to Reid and tells him that he gets up his nose. Reid continues undaunted.

With the top twenty single success of Pandoras Box (their first since Conquistador) drawn from their ninth recently-released LP (not surprisingly titled Procols Ninth) the position may change. In theory it should force the press into some kind of revaluation of the band. But in actuality it seems unlikely; indeed single charts success often catalyses the converse  an excuse for a plethora of shallow 'taking-care-of-business pieces.

The very politeness of the critical greeting bestowed upon Ninth seems to endorse this.

As an outsider, speaking from a position of relative neutrality  enjoying the band live but not sufficiently to ever want to pay either for an album or for any subsequent in-person viewing  Ninth sounds pretty much like any other Procol album, despite the fact that various extra-mural changes were instrumental in its production. Not the least, the hiring of Lieber and Stoller as producers, which gave rise to a rash of reviews propounding that Ninth is a return to the 60s aesthetic represented in Home (the 4th album). 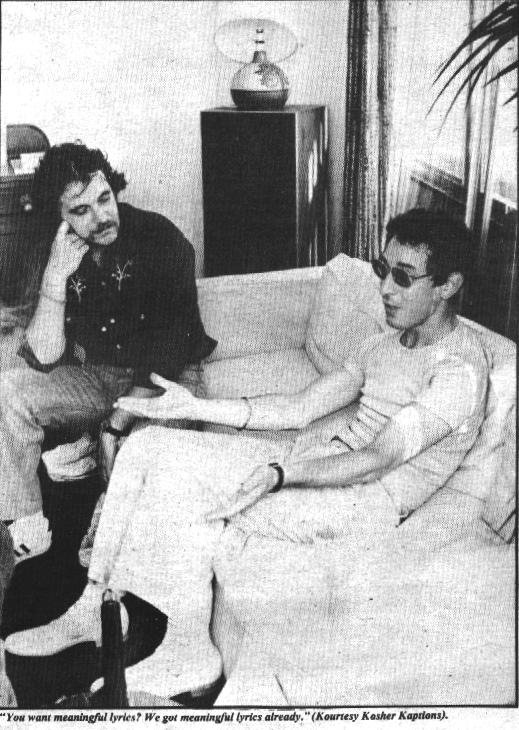 Brooker and Reid dont see it. Reid searches around for a possible suggestion to the claim.

"Maybe," he begins reflectively, "maybe  the connection is that Home was a very performance-orientated album  and nothing else. It was made with the intention of preparing people for what wed do on stage.

"Ninth isnt quite like that, but peoples playing, the individual performances, do come across very strongly. Lieber and Stoller were very performance-conscious."

A few people  myself included  reckon that the groups production on Ninths predecessor  Exotic Birds And Fruit  was something of an abortion. Is it why they brought in Lieber and Stoller?

"Personally," Brooker retorts defensively, "I thought it was a brilliant production. But then," he adds, somewhat acidly, "I suppose its more a question of what you like  whether it was the right sort of production is open to personal opinion."

The basic raison d'être, it appears, was simple boredom.

Aha! Time for perennial Procol interview head-scratcher; if maintaining a steady position with regard to popularity leads to boredom or loss of drive on the groups part then How Much Longer For Procol? (Note: this question is partly founded upon two apparently autobiographical Reid lyrics present on Ninth  Without A Doubt, which details the age-old writers promise of 'as soon as I get the first paragraph down the restll flow, and the self-explanatory Typewriter Torment).

Are they autobiographical then, Keith?

"They are. But not in a strictly literal sense; theyre not about me writing, specifically."

But they do give the lie to The Perennial; and perhaps even hint at the suggestion that Mr Reid has higher aspirations.

"I dont have higher aspirations."

"Subconsciously he has," says Brooker dryly.

"Far as Im concerned," Brooker postscripts, "if this ones a dud well try another and if thats a dud Ill go into production."

In truth I hadnt really asked when Procol Harum were going to break up. What I did wonder was whether their relatively unchanging position  albeit a fairly high-level one  induced a certain dispiritedness.

"Thats it," says Reid, as if Id just proved his point, "everybody equates the artistic side with commercial success."

Thats not what I meant.

Brooker observes to no one in particular that he is 'a bit peed off, actually. Reid asks him why.

"Im peed off," he says, slightly pointedly, "with being asked why were still going."

"The best way to find out about us," volunteers Reid, "is to talk to the people who like us. Have you ever done that?"

Not really. Have you?

"The people we meet are fanatics and thats never a representative view. usually when we meet someone its because that person battled his or her way backstage  someone who really wants to meet you."

So what kind of interpretations do they put on your lyrics?

"We met an American girl who did Salty Dog for a thesis by using the song and interpreting it in as many ways as she could. Amazing  one of them was a parallel with the sexual act. I had none of those ideas when I wrote it

"All I had in mind was to write a circular thing. It doesnt rhyme. Theres not one rhyme in the whole song."

Brooker good-humouredly corrects him: "What about 'a salty dog  the captains log [sic]?" he observes, grinning.

"Home seemed to upset some people from the point of view of atmosphere," he volunteers. "I think there was a lot of very pleasant little tunes on it," he opines cynically, inducing a giggle from Reid, who adds: "The general consensus seems to be that every songs about death. Categorically I had no idea that every song had a reference to dying in it until people came up to me and said it."

"If wed been Alice Cooper wed have given away a skeleton with every copy, with publicity shots of us coming out of the undertakers for a quick snooze on the tombstones "

"The reason for the success of the orchestral Live In Edmonton," Brooker opines, "  the excellence of it aside  was that people knew what theyd be getting: Procol Harum playing with an orchestra. It was very clear, easy for people to relate to "

But the roots of a Procol standard like The Devil Came From Kansas are all but clear.

"That came about simply because Ive always liked Randy Newman," Reid explains. "I bought his first album. There was a song on it called The Beehive State a line about the senator from somewhere or other  Ive forgotten. That line inspired it." But how are the plebs to know that? How many Procol fans are familiar with the first R Newman album?

Reid says that if his lyrics arent easily understood then he accepts a failure in their prime purpose  to communicate. Yet, the current single  in common with another PH standard, the apocryphal Gates Of Cerdes  is pure stream-of-consciousness fantasy inspired purely by the sound of certain combinations of words.

Brooker decides to cut loose from the traditional low profile  and sidestep in the process.

"The people playing in this band are the best people there are," he states categorically in oblique defence. "Every person," he continues dogmatically, "is as good as they can be on their instrument. We all stay together as a group," he adds, "but continually everybody is asked to be part of someone else."

I fail to rise for the bait. It could be a trick. And I hate being laughed at.

"And," he adds, after a pause, "would be making millions of dollars all the time."

The reporter dons his creep-cape. To lighten the atmosphere I tell Brooker that Little Feats drummer (himself highly regarded) had told me once that hed always wanted to meet his hero  Procols drummer BJ Wilson.

"As it happens," Brooker returns with satisfaction, "Richard Hayward once roadied for us "

"And so did that other whipper-snapper  whats his name??"

"Well, tell him," he goads Brooker, like a proud parent urging the offspring to reveal his 'O' level certificates to an uninterested relative.

"Yeah," says Reid. "They asked him to come and do their albums with them."

Once again Im not sure.

"Look," says Reid, observing my bewilderment. "Before we go Ill give you an example of what we were talking about earlier  about people not bothering to examine what we do

"Take a song like Toujours LAmour; theres a line  'the cord they knotted to keep us apart

"Now what do you think that means  'the cord they knotted to keep us apart?"

"Exactly! Now if someone had bothered to think about it they would have seen that it was all very simple

"But then, nobody ever does."

And that was the last week ever that Procol Harum had a hit-single or hit-album in either Britain or the US.

Rest of the news in brief

Procol Harum are to play a series of concert and college dates in late November. They are still being finalised and the only confirmed gig is at Southampton University on November 28.