These excerpts from New Musical Express, kindly selected for 'Beyond the Pale' by Yan Friis, show Procol Harum continuing to haunt the US album chart, against stiff competition, and being well-received at the UK's Isle of Wight pop festival.

JOHNNY JOHNSON REHEARSES IN ROOM OF MIRRORS
by Gillian Saich

Procul Harum [sic] and Blodwyn Pig were the guests of honour at a super beach-party-outdoor-dinner-reception at the seashore home of their publicist last week. I spoke with Gary Brooker, who seemed to be delighted with the sunny afternoon and the turnout for their shindig. He told me:

'The concerts this trip have been spectacular! At a big one in Maryland, the place was sold out and there was an equal number of people outside who tried to bash down fences to see us! It was amazing!'

(There's also some quotes from Jack Lancaster of Blodwyn Pig):

'The response has been greater to our playing this time round. And many places, the audiences come to see the main act on the bill, like Jethro Tull or Procul Harum [sic], but they've been great this time since we've been playing more things from our second album on stage.'

Both groups planned to return to London following an appearance at the Fillmore East last week.

Tipped for charts by Derek Johnson
White Plains, Lovin' You Baby
Tony Joe White, Save Your Sugar For Me

...Following Isle of Wight Festival - its last British appearance for at least two months - Ten Years After flies to Germany on September 4 for short tour there with Procol Harum ...

Headlines:
CAN THESE GROUPS REVIVE ZANY SPIRIT OF MONKEES?
Fresh-faces may oust the hairies!

ELVIS
ANN MOSES GOES TO THE LATEST PRESLEY FIRST NIGHT, THIS TIME FILMED FOR THE WORLD TO SEE, AND REPORTS....

One More Time - with Feeling!
CHRISTINE IS PERFECT REPLACEMENT FOR PETER, DECIDE MAC
by Nick Logan

JACKSON HEIGHTS WILL NOT BE A WEAK NICE
by Richard Green

Tipped for charts by Derek Johnson
Cliff Richard, I Ain't Got Time Any More

(excerpt)
... An even more exciting direction would be into the classics. It is already happening, but as yet, it isn't receiving the rave notices accorded to the horn bands. For me, the Procol Harum album, Home, contains much more imagination than any of the current horn albums. So too do the Moody Blues, and Spain's Miguel Rios, with his precedent-setting Song Of Joy.

The moral is that you can't build a rock group around horns - the horns must be built around the rock. Only then can the feeling still be there. 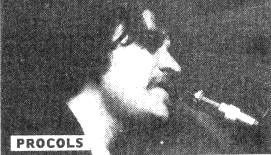 Procol Harum burst onto the scene in May 1967, with a beautifully constructed song titled A Whiter Shade Of Pale which established the group as a force to be reckoned with. Now, as then, the group's writing is done by pianist / vocalist Gary Brooker and lyricist Keith Reid.

Though without a hit of late, Harum is very highly regarded by public and musicians alike and is very big in America where the latest album, Home, received rave reviews. It has even been said that the group influenced the Band.

YES, THERE WAS MUSIC TOO!
At last, a report of the performances!
by Andy Gray, Richard Green & Roy Carr

(excerpt)
While the National press vied with each other to give readers more and more sensational stories about the Isle of Wight '70 Festival, concerning drugs, battles on Devastation Hill, nude bathing, babies on the site, losses by the promoters, vast sums paid to artists, lack of security, too much security, French-Algerian rebels joining with Hell's Angels, and a lot more jazz generally running down the Festival that had helped them with Press facilities, NME writers were listening to the music to bring you this report...

FRIDAY
TASTE, HARUM, FAMILY HITS AT WIGHT
... The hour was late, the air very chilled and the front-stage area, over-crowded with gatecrashing Frenchmen, when a rather strident Procol Harum proved that their overlong absence from the local scene hasn't in any way dimmed their appeal.

They were magnificent, no matter what they played ... be it such down-homey originals as Wishing Well [sic], the extreme soberness [sic] of Salty Dog or their surprising finale of good old rock and roll.

Down The Line, High School Confidential and Lucille had Gary Brooker pounding out the familiar piano lines and screamin' out those immortal lyrics... 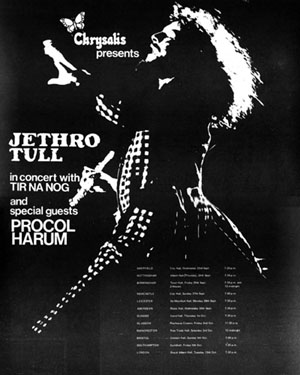 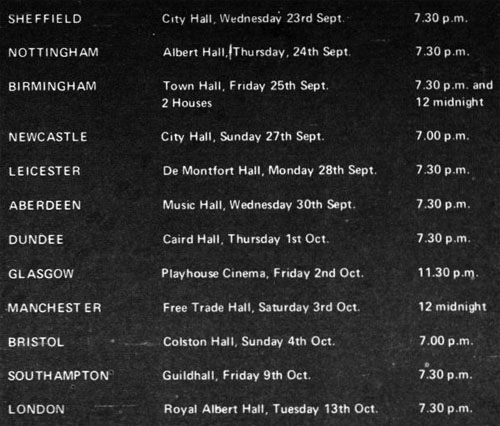 THERE'S ONLY ONE THING WRONG WITH MARMALADE...
...and that's the name!
by Alan Smith

Front page: Full page ad for Melanie 45 What Have They Done To My Song, Ma? / Ruby Tuesday (Buddah)

Headlines:
GOODBYE, JIMI
ABOUT THE HENDRIX WE HAVE LOST
by Richard Green

INVICTUS LABEL (No. 1 and 2 in NME Charts) BECOME A RIVAL OF MOTOWN
by Andy Gray

Engelbert storms at people who madden him!
by Alan Smith

News pages:
... Freedom, the trio formed by ex-Procol Harum drummer Bobby Harrison, flies to America on November 26 for 16 days of concerts, TV and promotional appearances to tie in with the release of its first album ...