These excerpts from New Musical Express, kindly selected for 'Beyond the Pale' by Yan Friis, show the band opting not to top the bill at a dismal festival, looning with the great Vivian Stanshall, and seemingly being re-evaluated by NME, rather late in the day!

Is rock'n'roll ready for 1976?
Is 1976 ready for rock'n'roll? (big pic of completely trashed pub or café or whatever)

My comment:
As you all can see, there was definitely something rotten in the State of Britain.

... Procol Harum also provide the other major happening of the week - because, after playing Olympia on New Year's Day, they are setting out on a provincial concert tour. They don't do many dates in this country, so this is a rare opportunity for their followers to catch them in action. You can see them at Bristol (Saturday), Cardiff (Sunday), Portsmouth (Monday) and Middlesbrough (Wednesday)...

British Music Fest: but where was the Great? (big pic of audience at Olympia)

On The Town
Certainly British, Usually Music, but Hardly Great; Five out of ten for effort, must try harder next year; But excellent results in some subjects.

Picture tourself a place called Olympia, where Procol Harum are struggling against the environmental odds. 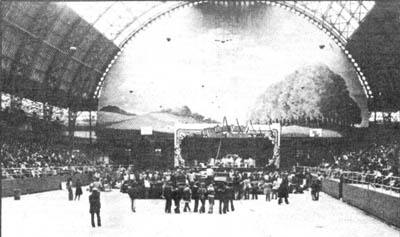 Under a pastoral painted wall hangs the Great British Music Festival stage set, which looks like a giant reproduction of a cardboard pop-up of the sort obtainable from the back of a Kellogg's packet. To the sides of the rostrum are banks of PA gear. And the stage lighting shines ineffectually on Procol with the house lights still up.

But the band battles on gamely.

Halfway back kids fill the main area of the hall, with the mixing desk dividing them off from a vast expanse of uncovered floor. Admittedly the seating areas to each side seem well filled, and although the official door receipts indicate an attendance of over 6,000, the audience looks half the size.

Despite it all, Procol play on.

The atmosphere's bleak. The sound quality's muddy and damp. And underneath the seating platforms there's wire mesh and assorted debris, giving the impression they're giant wooden-topped waste paper bins. In the bar there's no keg beer, they're only selling cans.

What a way to greet the New Year.

By now Snafu had opened the day's entertainment on schedule at 1 pm with some pleasingly tight music. They were followed by guitarist / pianist / vocalist John Miles, later described by those in attendance as "really good". And then along came the surrogate Lindisfarne, Jack The Lad, with the first big guns the Baker Gurvitz Army invading the stage next.

Apparently all was not well within the Army's ranks. Hampered by poor sound, dispatches indicate the band were not particulary pleased with their show.

Procol encountered the same difficulties with the house PA. Which goes to show one of two things. Either Olympia is just not suited acoustically for rock bands, or the engineers had problems comtrolling 40,000 watts.

Personally, I found the venue dismally impersonal, partly due to the hangar-like ambience of the actual location, and partly because the house lights remained on during the sets.

I doubt it was Procol's fault they were unable to create a conductive atmosphere for their music against such handicaps, because they had the appearance of a band playing well and enjoying themselves. And by the halfway mark of their act they'd confidently zipped through a lot of their established material, like Bringing Home The Bacon, Shine On Brightly, Conquistador, Grand Hotel and Pandora's Box.

As a result the middle section of their show seemed to be a shambling cacophony with dull thuds where the normal incisive rhythmic accents used to be. And even A Salty Dog lacked distinction.

Had it not been for their version of The Blue Danube - when they managed to stimulate the audience into some sort of physical reaction - I'm sure the response would have just been appreciatively warm. With a couple of minutes to spare (as Brooker put it) they consolidated that isolated achievement with A Whiter Shade Of Pale.

But what, may we ask, were they doing playing second to Barclay James Harvest?

Well, according to Chrysalis, Procol's record company, the band themselves chose their own spot, and as officially they shared bill honours with Barclay Jim, it matters little they didn't in fact close the show.

Tradition, however, is difficult to break. And from my own point of view I'm used to the Bigger Name finishing an evening for me, otherwise the complete show seems a little anti-climatic. That BJH should be considered good enough to deserve equal billing is, again, something I find puzzling.

Nothing personal, lads, but having seen them back in October on their British tour I'd arrived at the conclusion they didn't have the style, class or material to compete with, well, let's say, Procol. Had Harum pulled off a blinder then Jim would have had problems on their hands.

But Procol didn't, and in comparison Barclay James Harvest opened their set with unexpected confidence and panache ...

... I soon became bored with Lee's self-deprecating remarks about the banality of their material. And eventually I became bored agreeing with him, especially during numbers like Child Of The Universe and Titles [surely one of the lamest tracks ever recorded? RC].

And as their act slowly slid through the floorboards my yawns were punctuating every other bar.

However, the most alarming realization was yet to come. If this was the Great British Music Festival to open '76, what the hell is the worst going to be like?

Tony Stewart [another review of this gig here]

NME newsmen captures history as it happens. (big pic of original Small Faces in 1976, small pic of band in 1966)

Main single reviews by Kate Phillips
Count Bishops, Route 66
Slade, Let's Call It Quits
Pointer Sisters, Going Down Slowly
Isley Brothers, For The Love Of You
Tina Charles, I Love To Love (But My Baby Loves To Dance)

Actually it wasn't as incongruous a combination as it might have been. There was an element of desperate seriousness about Stanshall's basically hilarious and anarchic set; conversely Procol forsook the grandiose aspirations that often make their act ponderous and boring, and played a much looser gig than usual.

In terms of performance both acts, long-serving and distinguished, appeared to be merging their identities for the purposes of this tour.

Stanshall kicked-off with Rawlinson's End - a rambling, almost visionary stream of semi-consciousness built around a Radio 4 soap opera. Treated by the majority of the audience as just-another-comedy-turn, it was an inspired 20-minute monologue, mostly improvised, that suggested to this observer that Stanshall is moving towards the self-destructive social satire of Lenny Bruce; a vaudeville Iggy Pop - only when Stanshall throws himself into the audience (as he did the previous night at Birmingham) no-one is there to catch him. He ended up with a sprained leg.

Enough of this, on to Procol Harum: less pretentious, less weighty, less formal than usual. BJ Wilson at the front of the stage, balancing the grand piano, a definite star in his own right, thrashing the skins like Wilko Johnson with a pair of drumsticks. Mick Grabham, guitar, playing with the discipline and emotion of a concert violinist. Cartwright and Copping, bass and organ respectively, chording away like thunder.

And of course Gary Brooker, piano and vocals, soulful on songs about seasickness, enthused to the point of sweatiness. Also very good humoured and a bit boozy.

I'd never realized before what a genuine, gritty rock and roll band Procol Harum are. They played a lengthy two hour set with all the hits thrown in: Conquistador, Pandora's Box, Whaling Stories (really excellent), Simple Sister ... the lot.

For the first encore they were joined by Stanshall for a hilarious R'n'B satire. The Browns (including the immortal line, "don't make me brown", sung in a suitably pained voice by Stanshall). Superficially the theme of the evening was Fun, but when Procol broke into their grand finale (guess what) A Whiter Shade Of Pale, Stanshall collapsed. And instead of the show stopping, a couple of roadies just picked him up and ditched him in a chair behind Wilson's drumkit to feebly tap a tambourine in time to the music.

The 10cc Fine Art Collection, or, could you sell this band on the open market? (big pic)
Be-Bop / Nils / Kursaals
Jazz consumers guide

Single of the week (with pic of Gary and Keith): (see also here)
PROCOL HARUM: As Strong As Samson (When You're Being Held To Ransom) (Chrysalis) 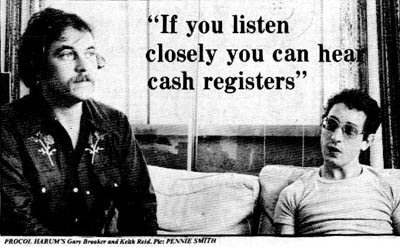 Coming across this amidst the overwhelming pile of dreck is a lot like discovering someone you know in a roomful of strangers.

You know, it brings you to life again after being bored solid. Oddly enough, As Strong As Samson isn't from Procol's last album, Procol's Ninth, but from the one before that, Exotic Birds And Friends [sic], and what's more it's been remixed so you hear a lot of things previously out of aural range - like the pedal steel half-way through which contrasts well against the stately keyboards of Gary Brooker (piano) and Chris Copping (organ). And then there's the acoustic guitar finger picking which appears with a marked clarity seconds into the record. Snuggled in between the rest of the album, As Strong As Samson sounded great, but now it sounds even better and the song's lilting quality becomes more apparent each time you hear it. Keith Reid's lyrics are fortunately less obscure than usual, witness the words in brackets after the title - which didn't appear after the song's listing on the album. The group thought it wise to include them because at this stage in the record Brooker's diction becomes a little muffled. Or to put it another way, no-one could understand what the hell he was singing about ... A fine, fine record.

Procol Harum will be undertaking a string of between 15 and 20 dates in March, consisting mainly of university gigs. However, the first to be confirmed is a non-college show at Doncaster Racecourse on Thursday, March 11.

No mention of Procol Harum in the annual readers' poll. As usual.