These excerpts from New Musical Express, kindly selected for 'Beyond the Pale' by Yan Friis, show Procol stealing the show at Crystal Palace (helped by with Gary's hair), and being 'best band' at the Reading Festival: meanwhile Alan Cartwright delivers a fine solo during a 'lopsided' song, and BJ makes a rare appearance in his own right. But what happened to that orchestral TV special?

Main single reviews by Charles Shaar Murray:
Bob Seger, Get Out Of Denver
James Taylor, Ain't No Song
Neil Young, Walk On
Hawkwind, The Psychedelic Warlords (Disappear In Smoke)
Black Oak Arkansas, Dancing In The Streets
Grand Funk, Shinin' On
Peter Shelley, Gee Baby
Dum, In The Mood
Wizzard, This Is The Story Of My Love (Baby)
Kiki Dee, I've Got The Music In Me
Frankie Miller, Little Angel

Of Dills and Dinosaurs and things that go Skkweeeepphhhtttbllch (pause) in the night
Crystal Palace Report by Pete Erskine (Pics, Ian Dickson)

(excerpt)
...Then there was Gryphon, but Procol stole it. Perhaps not the general consensus but the truth, boss. They played the Festival Hall earlier this year and the feeling was decidedly awkward, for then they seemed to be trying to cut it on standard rock band level - meaning that their more heavily atmospheric material, eg A Salty Dog, got trampled underfoot in the clamour to prove that they could Get Funky as good as anyone else.

The balance has been redressed. Hard to analyse why but, in this setting, Procol were incredibly moving. There's a kind of majestic quality to what they do; and Brooker's hair seems to have grown (add point five to the Credibility Count, there). BJ Wilson really has the strangest style of drumming (add three) and Mick Grabham's guitar soloing often merits more than isolated ripple. And along with the newer material - Butterfly Boys, Grand Hotel, Bringing Home The Bacon, Beyond The Pale - they're chucking in immaculate renditions of Conquistador, Homburg, The Gates Of Cerdes, Power Failure - and would have encored with - believe it or not - A Whiter Shade Of Pale had not the plugs been pulled. Surely it would've been preferable for there to have been three, maybe four, bands enabling each to stretch out a little more? Perhaps not. There's nothing worse than long sets.

The real choker is the inordinate attention accorded Leo Sayer; sure the geezer can sing and, yes indeed, it's a remarkable band he has, but wherefore this knot of querulous dudes when Procol were playing?...

Main single reviews by Ian MacDonald
Isley Brothers, Live It Up
Showaddywaddy, Rock'n'Roll Lady
Barry White, Can't Get Enough Of Your Love
Gilbert O'Sullivan, A Woman's Place
Billy Preston, Nothing From Nothing

The greatest asset Procol Harum have is their originality. There are few bands as far out on a limb as they are.

They're not a rock'n'roll band. Procol are too clean and tight for that. There's barely a hint of raunch about their music, which is polished to the point where majestic is a word often used to describe them.

Mick Grabham is essentially a blues guitarist. He plays aggressive solos but his role within the band is limited. Procol Harum are not a blues group - that's one of the reasons why Robin Trower is a long gone member.

BJ Wilson is a rock drummer. The way he bombards his kit makes him one of the country's most powerful drummers. He's an integral part of Procol's music but he's not the centre of it. That's left to the very cordial Gary Brooker.

At their Croydon Fairfield Hall gig on Friday night all this was demonstrated. Sometimes it was satisfying; a lot of the time it wasn't, although the majority of the audience seemingly came away feeling totally satisfied judging by their reaction.

Their set is now comprised of [sic] material taken right from their very first album to their most recent, Exotic Birds And Fruit.

From the early days they played Gates Of Cerdes, a song that bears out their blues roots and one of the few numbers which highlighted Mick [sic] Cartwright's bass playing (later in the evening Cartwright delivered a fine solo during Simple Sister which wasn't just an excuse for a piece of self-indulgence).

Conquistador was also included from their début album, and it still stands as one of their most fulfilling songs. Ditto for Salty Dog and Whiter Shade Of Pale which was inevitably the band's second and closing encore.

It's those three songs that really pinpoint the heights of Gary Brooker and Keith Reid's songwriting. Some of their other material like Simple Sister and The Devil Came From Kansas sounded lopsided to me.

They also included The Beatles' Eight Days A Week, presumably for everyone to sing along to. There's not really anything else in the Procol Harum repertoire to sing along to, but then they always were a thinking man's band.

Talking to a Harum afficiando [sic] afterwards, I was informed that the Croydon set wasn't up to par and the sound wasn't as perfect as usual. Except for the band and their immediate circle that probably didn't matter. After some seven years in the public eye Procol Harum don't really need to worry about making it for although they're not up there with the Zeppelins and ELP's of this world their status is assured.

And they do occupy a unique position in British rock. It's probably something to do with their being so far from the mainstream that I find a lot of their material inaccessible. Obviously a lot of people don't share my view, but that's cool. 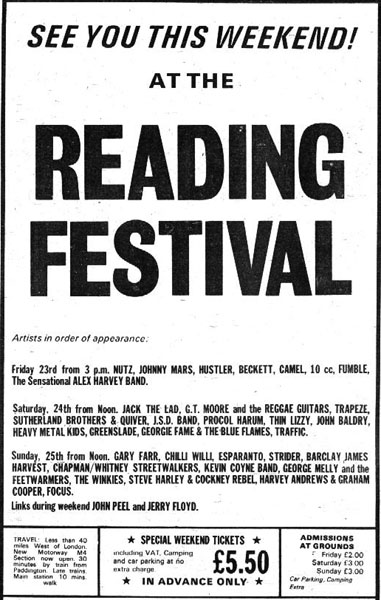 ... Two other names have now been added to the bill - Procol Harum, who appear on Saturday, August 24, and the Chapman-Whitney Streetwalkers (25)...

Procol have also been asked to play two stadia in Greece during October.

SATURDAY: Okay, so Ronnie Lane has dropped out but he's been replaced by Procol Harum. Traffic are headling, as is Georgie Fame, who's debuting with his new Blue Flames ...

... The day's running order had been shuffled and Procol Harum, advertised to play later in the day, took the stage mid-afternoon with the sun still streaming down.

From the opening bars of Shine On Brightly it was crystal clear that the Procols were the best musicians to take the stage so far that day, as their set progressed, the best band too.

Their set took in material from the entire span of their career: the bluesy Gates Of Cerdes from their début album which demonstrated the band's raw side, the stately Homburg, the awesome Salty Dog, the highly-arranged title cut from Grand Hotel, the perfectly-constructed Conquistador, Beyond The Pale from Exotic Birds And Fruits [sic] and Simple Sister - from Broken Barricades.

They met the demand for an encore with what they announced as "a song from the Sixties". Everybody thought it was going to be Whiter Shade Of Pale, but instead it was The Beatles' Eight Days A Week, and somehow lacking the buoyancy of the original. Then it was straight into A Whiter Shade with everybody standing on their feet [sic]. The day's only magic moment.... 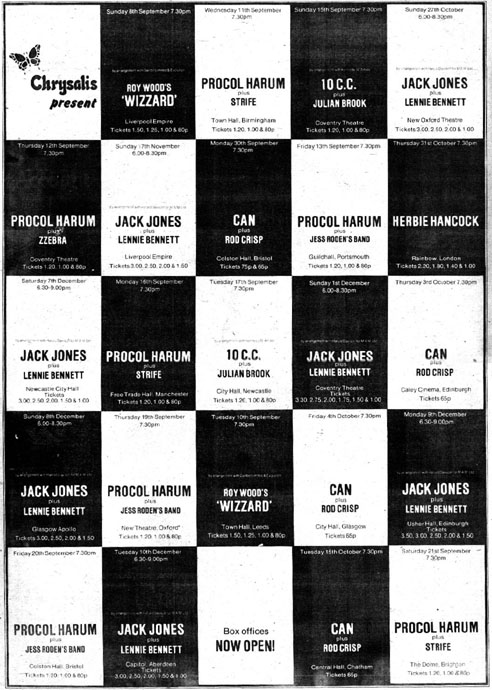 And also an ad for a drum arrangement with BJ participating. 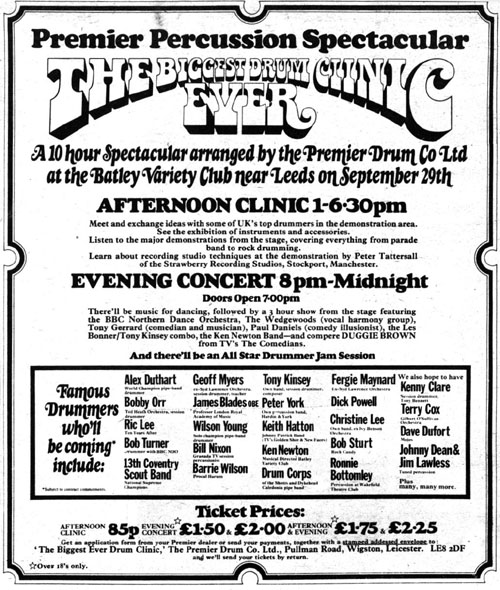 (excerpt) Procol Harum don't believe in outwearing their welcome in this country, and a British tour by the band is a rare event indeed. But that's precisely what they have in store for us this month, opening in Birmingham on Wednesday. They're not including a London date in this new schedule, because they appeared at Crystal Palace in late July and Croydon in early August - not to mention the recent Reading Festival.