These excerpts from New Musical Express, kindly selected for 'Beyond the Pale' by Yan Friis, include a Trower interview and a luke-warm concert review ... where the band nonetheless played four encores!

From an interview with Robin Trower (by Steve Clark):
Jimi Hendrix is alive and well and living in Robin Trower

... after the obligatory school groups, he formed The Paramounts, who at one time included Gary Brooker and BJ Wilson - musicians who Trower would later join in Procol Harum.

"We turned professional and made records, got nowhere so I left."

Trower spent the next few months listening intensively to blues: "It seemed like the most right thing I'd ever heard. The most honest, pure, real music. It was honest, it was heavy. Also it's obviously the ideal medium for expressing yourself on the guitar. The electric guitar must have been made for blues." To play the blues, Trower formed a three-piece and called it The Jam. That was immediately before he was asked to join Procol.

"I got a phone call from Gary who said, 'Do you want to be a millionaire?' They had a number one single at the time."

They certainly did, and it was called A Whiter Shade Of Pale.

Trower continues: "When Gary asked me to join I said, 'What sort of stuff are you doing?' He said, 'I really see a blues guitar in there,' which suited me fine.

"I really liked their material; the songs on the first album were great. But it was terribly badly produced. Had it been produced properly it could have been a classic, 'cos the material was so strong. So were the performances, considering we'd only been together six weeks when we made it."

He looks on his days with PH as "a very lazy period". He'd never pick up a guitar except to perform - and he says he wasn't really playing then. "I wasn't into the instrument at all then. I knew nothing about it. It's since I've left Procol that I've started to discover ..."

The real turning point for him and Procol Harum was his Song For A Dreamer off the Broken Barricades album. It was a tribute to Hendrix, and Trower says it opened up the doors. He had been listening to Hendrix from the first album, Are You Experienced.

"It was just a sheer ... energy, I suppose. It was incredibly energetic and powerful, but sweet at the same time. The whole album's just got something, an incredible earthiness. After that he started to get, recording wise, sophisticated." ...

Edited by Nick Logan, compiled and written by the NME staff. Run as a series in NME during late autumn 1973 and winter 1974. You collected the parts, and by folding and cutting along dotted lines you had a complete 80 page encyclopedia that you could put in a cardboard cover (also included in the NME).

Here's the entry on Procol Harum:

Conceived 1967 as outlet for Brooker-Reid compositions, rapidly found themselves with massive worldwide hit, A Whiter Shade Of Pale.

Visited America following year for first of numerous tours and amassed considerable following there. (2) and (3), still considered by many as their most substantial achievements, established them further. Matthew Fisher, organist and producer of (3), left in mid-1969 (now a solo artist and producer) closely followed by bassist Dave Knights.

Chris Copping, another ex-Paramount, took both their places and as a quartet they made (4) and (5) after which guitarist Robin Trower, whose frustration was becoming increasingly evident with each recording, left to form Jude and later Robin Trower band (see Robin Trower Band).

Replaced by Dave Ball, and bassist Alan Cartwright was added to the line-up involved in (6), one recording of a continuing series of experiments with orchestras.

Soon after, Mick Grabham took over on guitar and what now appears to be a stable aggregation produced (7), their most satisfying work for some time.

Noted especially for Keith Reid's scholarly lyrics and Gary Brooker's superb piano playing, Procol Harum, although by no means unpopular, have yet to attain their US success in Britain.

This article was expanded for a 1977 book.

are to play a short series of concert dates in Britain during the summer. Details are still being finalised, and so far only two venues have been confirmed - they are Sheffield University (June 22) and Croydon Fairfield Hall (August 2).


(excerpts, omitting the paragraphs concerning themselves with support act Zzebra.)

Will they or won't they play Whiter Shade Of Pale? An object lesson in how a hit record can become an extremely weighty milestone round your neck. First recorded in, when was it, 1967, and still the audiences want it. It's as bad as The Beatles still doing She Loves You.

Length of service must be telling on Procol Harum, as it was Zzebra who came over the most refreshing, inventive and exciting group...

... By comparison, Procol Harum were a shade of pale of their former selves. For once the roadies knew what they were doing, and the set was changed in twenty minutes. Thus no time for restlessness among the faithful, and Brooker et al bounded onstage on time.

The trouble with the group, reliant on the two talents of Reid and Brooker for the compositions, there is a tendency for a majority of the numbers to sound the same, in a way similar to Elton John/Bernie Taupin. And the piano/organ juxtaposition does nothing to offset this. To give them credit, though, they didn't saturate the set with this sound, and in fact, they played more as a hard rock band with no little class.

This was no mere re-play of their new album, but rather a collection of recent and not-so-recent Procol history. Unfortunately, the sum of the parts didn't match the whole, and the numbers came out rather too automatic for them to have any life.

They did improve, though, as the evening wore on, (or else I was becoming punch-drunk), and certainly the audience loved it all, dutifully cheering and applauding favourites like Conquistador, Grand Hotel and Salty Dog. But they were playing a potentially dangerous game, living in and on the past, and shortcomings were apparent when they attempted extensions on the basic form, with the music meandering without much apparent purpose.

Of course, they came back for encores - four in all! - though to me Zzebra deserved the accolades; and one of these four was Old Black Joe, lifted straight from the Jerry Lee single. This was very well done, and got deserved loud applause.

Oh by the way - yes, they did do Pale- as the fourth encore!

Was school ever like this?
NME reports the schoolkids "Tommy"

The NME staff presented their own 100 best albums of all-time on June 1, 1974, but leaving the No. 100 spot vacant for all their readers to fill. Some of their suggestions were then presented as reviews in the NME throughout the summer. And here's one for Procol Harum. Oh, by the way, Mike Oldfield's "Tubular Bells" won this original poll, and got to be No. 100...


1968; when all around were losing their mellotrons, kaftans, and 41-piece orchestras, in favour of denims, Rory Gallagher plimsoles and Elmore James tresses - Procol Harum, still in the shadow of their first single, dug deeper into their own style and came up with their most together album to date - Shine On Brightly. 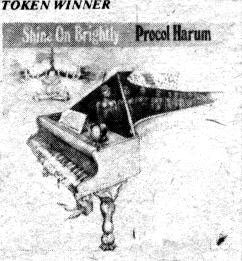 Two complementary and varying keyboards gave Trower unprecedented freedom, which he used to play counter-melodies, not, as was fashionable, borrowed blues licks or tasteless screeching.

Keith Reid, although a bit heavy on the "Position and Problems of the Individual Confronted by The World and the Mysteries Of Life". knows when to stop and deflate (Glimpses Of Nirvana); and the music, not as obviously derived from the classics as Whiter Shade Of pale and Repent Walpurgis from the first elpee, towers above the sweat-stained-jeans / three-chords (all E) / it's-the-feeling-that matters choogle.

As well as thunderstorms, police-cars, backwards-tapes, recitation, heavenly choirs AND a sitar / drone / Dalai Lama piss-take which predates Sexy Sadie by some months, there's funk, emotion, and a feeling of unity, which was lost on Salty Dog and Home.

Just a tiny snippet in the Nationwide gig guide:

... Procol Harum making one of their rare London appearances and playing their first outdoor gig for three years ...

(and a small pic of Gary)