These excerpts from New Musical Express, kindly selected for 'Beyond the Pale' by Yan Friis, feature big interviews with Keith Reid and later with Gary Brooker, though there's oddly no review of the band's first headline gig in London; meanwhile Robin Trower gets a new group together.

LENNON ON THE TROUBLE WITH PAUL (big pic of John & Yoko)

PROCOL CAN GO FOREVER!
Lyricist Keith Reid sees no reason why Procul [sic] Harum shouldn't carry on forever. That is, providing his song writing partnership with Gary Brooker holds together and they continue to maintain their artistic standard.

Maybe the group don't seem to attract much public attention, but they have built up a strong and loyal following, especially in the States, which is large enough to comfortably keep them on the road. And as their new album Broken Barricades has been selling well a renewal of interest in Procul [sic] Harum may be not far off.

Just before the group left for their eleventh tour of the States this week they went through a change of line-up. Robin Trower left to form his own group and was replaced by David Ball from Big Bertha. Bassist Alan Cartwright also joined the group from Every Which Way.

For some groups such a change would mean a drastic change of style or at least a period of uncomfortable transition as the group settles down in its new form. But that's not the case with Procul [sic] Harum. Non-playing member Reid feels as long as he and Brooker are part of the group the style will remain much the same, depending little on the others. 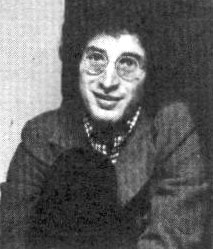 "The music has never depended on the people involved in the group," he said. "The people playing with us just complement whatever Gery [sic] and I write so it's not the end of the world if anybody leaves. I'm not denigrating the musicians, obviously they have to be good, but the group is based on songs rather than the playing potential of the people involved. We propel it all along while the musicians supply the energy."

Reid writes the mysterious, often horrific words and images in complete isolation before pianist Brooker fits them together with his music.

"I don't write about idealised subjects like people falling in love," said Reid, "but more from ideas I get from what's going on around me. I get a idea maybe from a book or a picture and follow it through, hoping that people who hear the words will get the same feeling from it as myself.

The latest collection of numbers to be released, Broken Barricades, was recorded by the old line-up in March this year and features strings on some tracks.

"I personally like strings on everything," said Keith. "For this album we just had some songs which seemed to call for strings so we added them in the appropriate places. It's the first time we've used them since the Salty Dog album.

Although the album is selling encouragingly in Britain, the bulk of the group's following is in the States where it has become almost a cult.

"We don't have a audience large enough to sustain us anywhere else in the world," said Reid. "I don't think we are any more acceptable to American audiences. I think it just boils down to exposure.

"Early on in our career we went over there and through underground radio people became aware that we weren't just a one-hit wonder group or something. They realized there was more to us.

"I think in other countries people are still only aware of us through a couple of records although I personally would have thought it easier for Europeans to relate to us than Americans, who are really total strangers."

What else?
Is it just a lack of exposure that prevents them becoming equally successful in Britain?

"In the past I think it had a lot to do with our hit record," he said referring to A Whiter Shade Of Pale. "After that we went through a lot of bad changes, we sacked two members of the group, it was said we didn't play on the record and the whole thing ended up as a hype.

"When we released our first album there wasn't an opportunity for anybody to hear it. There wasn't the audience for groups that exists today. People outside London were still into Geno Washington and the soul thing and there wasn't a large university circuit as there is now.

"Even though the situation has changed there are still only limited possibilities for us. We can't really play in clubs because of the lack of facilities. For instance, we have to have a grand piano and that's only possible in a fair sized concert hall. But people aren't very interested in promoting us in those sort of venues because it is unlikely we will sell out. The only other alternative is playing as a supporting group which you can't do for ever, or the universities which we play whenever they're offered.

Not bitter
"I would like the group to have a good following over here but I don't feel bitter about it or anything. We're hardly ever offered any gigs in Britain that we don't do.

"I think it's understandable that when people think of the group they still think of Whiter Shade Of Pale. The record for us was just a freak thing. It wasn't our finest hour or one of the best songs that we've ever written. It just clicked at the right time.

"We're not in the music papers every week and when we are it still tends to be articles like 'they had a big hit, but look they're still going folks.' It seems like the image of us still living in the shadow of that record is still carried on.

"Maybe we've propagated it a bit by not aggressively living down. But we've never made a big deal out of it because it has never been a big deal to us."

A few words of comment on the PH American tour:

Seems they timed it wrongly arriving when the album was slipping down the charts.

Their arrival drowned in the publicity surrounding George Harrison's cast of thousands for the Bangla Desh concerts in New York.

Another amusing news-snippet from the NME pages during the summer of 1971:
Dennis Wilson hurt his hand so he couldn't drum for a long time, only sing. So The Beach Boys searched for another drummer for their concerts. They really wanted Keith Moon. A nice combination since Moon in fact was a lover of surf music long before he became a member of the Who, and even tricked the Who into recording a couple of Jan & Dean / Beach Boys-favourites: Bucket T, Barbara Ann, Batman Theme on the Ready Steady Who EP in 1966. He never accepted the job, though, probably because of his commitments with the Who.

But we can't print comments (story and pics of Mick Jagger and Gimme Shelter album cover.)

Richard Green gives Freedom's Through The Years (Vertigo 6360 049) a review. '... I couldn't find anything to distinguish it from hundreds of other albums by hundreds of other competent British rock bands ...'

It's Summer, The Temptations
Tap Turns On The Water, C.C.S.
On The Way Out, Jimmy Ruffin
Tweedle Dee Tweedle Dum, Middle Of The Road

From the news pages:

FORMER TULL, HARUM MEN IN NEW OUTFIT
A new group, as yet without a name, has been formed by ex-Procol Harum guitarist Robin Trower  with Clive Bunker, until recently a member of Jethro Tull, on drums. The line-up is completed by former Stone The Crows bassist Jim Dewar and new singer Frankie Miller. The outfit plans to go on the road at the end of September, and dates are currently being booked by Chrysalis, which manages it. No recording plans have so far been announced.

Trower formed the group with Miller, and they have been writing songs together for the past three months. Jim Dewar, who also sings, worked with Miller in Scotland and came in on bass. Bunker  a founder member of Jethro Tull, who left that outfit prior to its last American tour  jammed with Trower, Miller and Dewar when they were rehearsing in a village hall in Essex, and then decided to join them.

From the news pages:

(excerpt)
A top-line British package tour featuring Jethro Tull, Ten Years After, Curved Air and Procul [sic] Harum begins a seven-week American tour on November 5. Air's new album is being rush-released in the States within the next ten days as a fore-runner to the group's visit....

Main album reviews:
Imagine, John Lennon
Touch, The Supremes
Bark, Jefferson Airplane
Welcome To The Canteen, Traffic
What You Hear Is What You Get, Ike & Tina Turner
If I Were Your Woman, Gladys Knight & The Pips
Indelibly Stamped, Supertramp

RETURN OF THE EVERLYS (drawing)

THE WANDERING PROCOL HARUM GROUP ARE IN LONDON FOR A CONCERT SO WE CATCH UP ON THEIR PROGRESS IN MUSIC
By Martin K. Webb

This interview is already on the website: it features a very nice photo of Brooker with Reid looking rather moody in the background. 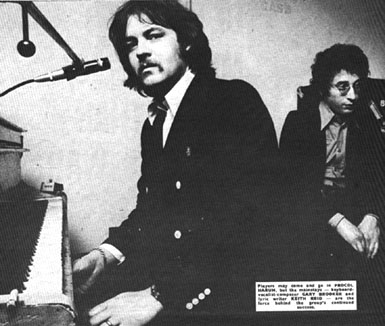 Caption: players may come and go in PROCOL HARUM, but the mainstays  keyboard-vocalist-composer GARY BROOKER and lyric writer KEITH REID  are the force behind the group's continued success.

Not a word on the Procol Harum concert at Queen Elizabeth Hall, London on September 17. But loads of other concert reviews in the NME's September 25 edition. They even use half a column reviewing a concert with Martha Schlamme (who??)!

In the Who's Where column we find the following:
(excerpt)