These excerpts from New Musical Express, kindly selected for 'Beyond the Pale' by Yan Friis, show Procol Harum well received in concert and on vinyl as Home is released.

Front page: Full page ad for The Who's Live At Leeds (Track)

Headlines:
The BAND'S ROBBIE ROBERTSON talks to NICK LOGAN
Second album was recorded at former home of Sammy Davis
NEXT BAND LP TO BE MATE AT WOODSTOCK IN A NIGHT!

MOVE WERE DEAD WORRIED ABOUT NEW SINGLE
by Alan Smith

Rest of who's where

For Christine, hard work hasn't made Perfect
by Richard Green

50 NOT OUT-CLIFF!
My fans and songs have changed
by Richard Green
(regarding Cliff's 50th single)

JACK BRUCE
- the thoughts of a reluctant star
by Nick Logan

Headlines:
JOHN FOGERTY talks to ROY CARR about the best disc CREEDENCE has made
UP AROUND THE BEND
' FANTASTIC TERRIFIC ...'

...the stock responses, MUNGO JERRY prove it, will always out
by Nick Logan

IS ELVIS BELITTLING HIS EARLY HITS?
by Roy Carr

Tipped for charts by Derek Johnson
Creedence Clearwater Revival, Up Around The Bend
Lulu with the Dixie Flyers, Hum A Song
Temptations, Psychedelic Shack
Kinks, Lola
Joe Cocker, The Letter

Procol Harum and Affinity are showcased in BBC-2's late-night Disco 2 on Saturday, June 20.... 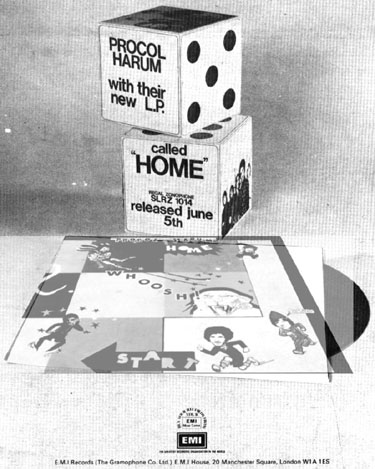 Friday nights at the Lyceum in the Strand often prove to be enjoyable gatherings. Last Friday was such an occasion due to the fact that Procol Harum were appearing.

Now down to a quartet, there is still a marked similarity between 'Our Boys' and the Band. As Procol Harum were in fact achieving world-wide success prior to the Band's emergence, one is rightly led to believe, with certain amount of patriotism, that you are listening to the original.

Though the PA left something to be desired, those familiar slow ponderous piano lines over which Gary Brooker utters, shouts and sometimes sings the prose [sic] of Keith Reid, interweaved admirably with Robin Trower's guitar figures.

It is good to note that there are still some guitarists content to work on producing an overall group sound, and not go ego-tripping.

To these leads, Chris Copping added climatic [sic] bass runs which did much to heighten the drama and intensity of their programme. The entity was held together by BJ Wilson's heavily accentuated drum punctuations.

The remainder of the warm evening's sounds were supplied by Hard Meat, who effectively switched between a selection of electric and acoustic material which was mainly self-penned.

Headlines:
THEIR HIT WAS BORN ON A FARM
say 'nasty' ARRIVAL
by Alan Smith

BEACH BOYS REACH No5, WHICH ISN'T TOO BAD...
FOR A FADING ROCK BAND
Bruce Johnston phones Roy Carr from America

MOODY BLUES WIZARDS OF ELECTRONIC GADGETRY
But the law could step in!
by Nick Logan

News pages
RADIO 1 GUESTS
- for all next week

News paragraph on who's gonna play at the Bath Festival with pictures of Jefferson Airplane and Led Zeppelin.

THE FUNCTIONING ANARCHY OF JEFFERSON AIRPLANE
by Nick Logan

HAPPIER THAN EVER - says ZEP'S JOHN 'BONZO' BONHAM
annoyed by rumours of a break-up....
by Roy Carr

Tipped for charts by John Wells
Elton John, Rock And Roll Madonna
Madeline Bell, We're So Much In Love

Since the excellent Salty Dog failed to work it for them the Procols look as if they may never get the recognition they deserve for what has been a consistent output of quality albums and inventive music.

This, their first since Matthew Fisher's departure - Chris Copping has taken over on bass and organ - keeps to their own high standards.

Gary Brooker wrote seven of the tracks, Robin Trower the other two, with Keith Reid supplying the lyrics, and while there are the typical Procol mood songs you'd expect to find, The Dead Man's Dream, Barnyard Story, Whaling Sorties [sic], they also rock it up a bit more than in the past.

Whisky Train features some splendid rocking guitar by Trower, who plays just as well here at the other extreme of mood. He also contributes About To Die, an impressive track that stands up to any past Procol "epics". Another fine album.

Other titles: Still There'll Be More, Nothing That I Didn't Know, Piggy Pig Pig, Your Own Choice.