These excerpts from New Musical Express, kindly selected for 'Beyond the Pale' by Yan Friis, show the start of the Procol re-release industry, while the band tours with Curved Air, plays in Finland, records the famous WPLJ set ... and Gary Brooker votes for Matthew Fisher in a poll.

(excerpt)
Release of the first supplement in the Fly label's new budget-price series Flyback has been postponed until March 5. The four albums involved include The Best Of T. Rex, full details of which have already been reported in the NME. The other three LP releases are:

THE BEST OF PROCOL HARUM including Homburg, A Salty Dog, Pilgrim's Progress, Shine On Brightly and She Wandered Through The Garden Fence.

Tipped for charts by Derek Johnson:
Walking, C.C.S.
Have You Ever Seen The Rain, Creedence Clearwater Revival
The Song We Used To Sing, Desmond Dekker

(excerpt)
CURVED AIR - which has just completed a concert tour with Black Sabbath - is lined for another British Concert tour in March. This time it will top the bill, with Procol Harum and Tir-Na-Nog as supporting attractions. And the maximum admission price throughout the tour will be 14s (70 p). Curved Air is also set for a major tour of the United States, which begins on March 22 and lasts for six weeks.

This copy should be somewhere in my apartment (or down in the basement), but it might take some time before I find it. Until then, we might as well go on:

Yan later added, 'I found it (in my basement), and there was no mention of Procol Harum inside'.

Tipped for the chart by Derek Johnson:

Hey Willie, The Hollies
Rags To Riches, Elvis Presley
Oh You Pretty Things, Peter Noone
The Banner Man, Blue Mink
Pay To The Piper, Chairmen Of The Board

(Just a funny little comment on Ringo: in Norway the single cover by mistake reads: I Don't Come Easy!)

Winner: Neil Young.
and
Runner-Up: John Lennon.
Gary Brooker is not one of the names taking part here, but he does get a couple of votes. Here are the ones who like him and their Top 3s:

AMERICA CALLING
By Nancy Lewis in New York
(excerpt)
... It's a rare occasion to hear any 'live' music on American radio stations, but New York's WPLJ (FM) is running a very successful series of concerts.

Strange, isn't it, to think that nowadays the broadcasting of live music is a real novelty in America!

Tipped for the charts by Derek Johnson:
Can You Get It, Ashton, Gardner, Dyke and Co.
Warpath, Isley Brothers

NME ask 34 guitarists to name their favourite three guitar-players. The winner is Eric Clapton, one point ahead of Jimi Hendrix. No mention of Robin Trower anywhere.

News pages:
(excerpt from snippet on rock festival in Finland)
... Procol Harum, Juicy Lucy, Fairport Convention and Mott The Hoople will also feature at the three-day Turku event (August 20-22), and the promoters hope to book another two British groups. Besides Canned Heat, John Lee Hooker will represent America. Groups will be playing non-stop for ten hours daily at the open-air site outside the city which attracted 30,000 fans last year ... 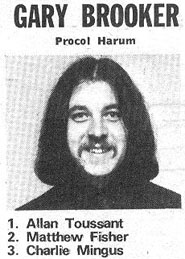 34 of them don't mention any Procols or ex-Procols. But one does.

The NME May 29, 1971 completes the musicians' poll, but there are no Procols mentioned neither in the bass-section nor in the drums-section. Yes, that's right, no BJ! And that is a mystery because NME really did ask some of the most respected drummers of that period. 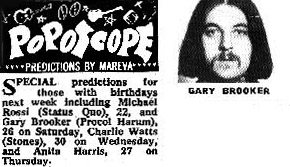 Anyway, in the Poposcope-column the NME names some of the stars that have birthdays that week, quote:

There's even a small picture of ol' Gary:

Oh, and the front page features three photos of Ringo Starr from the filming of Cilla Black's TV special on Geilo, Norway.