These excerpts from New Musical Express, kindly selected for 'Beyond the Pale' by Yan Friis, show Procol Harum wowing Brighton and announcing a big London gig, while Matthew Fisher brings out a 'mediocre' single with 'faulty' melody from his 'predominantly melancholy' solo album, and gives a revealing interview.

MATTHEW FISHER: Suzanne (RCA)
From Matt's forthcoming album, Journey's End, we have an obvious single choice. On his solo début ex-Procol, Mr Whiter-Shade-Of-Pale is going in for a mediocre pop treatment, with a slight country air, that bursts into a Stars On Sunday organ solo mid-way through. His melody is a mite faulty, though the rhythm section hump it along reasonably well. as he sings about woman problems and wondering where Suzanne'll be after packing her away on a chuffa. I'll pass.

Procol Harum are unique: an erratic live band capable of the shoddy as well as the brilliant, in Brighton they delivered one of their finest shows. Conquistador kicked off the proceedings, followed by Bringing Home The Bacon, one of those typical Procol rockers, all percussion and hollow piano.

Most of the material from Grand Hotel was offered, each piece providing that orchestral effect ... without the orchestra. BJ Wilson, all cymbals and hi-hat, gives the band much of their majesty as he duets with Brooker's piano.

That distinctive Procol grandioso came through on Fires (Which Burn Brightly) as Chris Copping, master of the full-sounding organ, backed up Brooker's honky piano. Still There Be More [sic] immediately followed, changing the hall's atmosphere as Procol switched from orchestra to rock band highlighted by a Mick Grabham guitar solo.

The band's favourites like Salty Dog, Devil Came From Kansas and Grand Hotel were played stronger than ever.

Power Failure, the ultimate touring song, featured an incredible drum solo from BJ. This man of a thousand rhythms is one of Procol's lead players, really alive as he duels against Brooker.

Simple Sister closes the show; played with the toughness of the lyrics, it's mean and really nasty. Quite lovely.

After the beautiful set, there's no way the crowd will let the Procols go easy. A couple of standard rockers, a down-home Souvenir Of London and it's over.

But the people insist on more; finally; Procol return. "Anything you want to hear?" Brooker asks innocently. And then like a paean from heaven, the first chords of Whiter Shade Of Pale fill the hall.

This band has class.

This Is America:
Some nice words regarding Robin Trower's concert in Central Park. Headline:
Trower power triumphs with a little Hendrix and Cream

"I really don't want to talk about Procol Harum except to set the record straight where necessary."

Matthew Fisher, once the saturnine figure encased in a monk's habit and hunched over the organ for the group's contribution to festive television almost six years ago, has been asked an awkward question.

So he points his moustache towards the ceiling, looks into the distance and considers carefully.

A pleasantly succinct conversationalist, Fisher has already spoken of his days as a bassist in semi-professional outfits, of two terms spent at music school, of a spell in the Gamblers who used to accompany Billy Fury on engagements such as Saturday Club.

But the subject of Procol Harum - who have occasionally referred to him in less than glowing terms - obviously induces a measure of caution.

"Procol Harum was conceived as a vehicle for Brooker-Reid material," he begins after a few moments of rumination. "Having written these songs, they wanted total control over how they were to be done, and they decided that the best way to do this would be to form a band.

"When I joined after buying a Hammond organ and placing an advert in one of the music papers, Gary wanted to be Ray Charles, Keith wanted to be Bob Dylan and I wanted to be Jimmy Smith, Booker T and Bach rolled into one.

"After Whiter Shade Of Pale, it was almost as if my style - the dramatic element I'd added to the group which wasn't there before I came along - was taken and adopted to the extent that it's now become their style, which means I've got to find something else.

"I've got to show that I can do other things as well."

The purpose of the encounter is to discuss Fisher's new album Journey's End which, to a greater degree than he would have wished, displays the traits he brought to Procol's work.

Officially, he left Procol Harum in mid-1969 after producing their masterful A Salty Dog LP.

In addition to that, he wrote a third of In Held 'Twas In I, the backing track to Quite Rightly So (both on Shine On Brightly), the tunes for Boredom and Pilgrim's Progress and everything except the lyrics of Wreck Of The Hesperus (all on A Salty Dog).

Why did he leave?

"I wanted to leave the band as early as July 1967, when it became obvious that I wasn't going to get the credit I should've got for Whiter Shade Of Pale, and that it was going to be a one-man-band and a backing group.

"And for the next two years, I was talked out of it each time I decided to go. Eventually, that particular time, no one tried to talk me out of it."

When he left, Fisher wanted to become a producer, but no one appeared interested and the result was a distinct lack of activity.

"I had this vague idea," he says, "Of starting up a little recording studio. Unfortunately, I've got no business sense at all and it didn't get far."

It was approximately two years after his departure that Fisher received an offer from Procol Harum to rejoin them, but after several rehearsals and a number of disagreements, he decided to accept a job as a staff producer at CBS in New York.

He remained there for six months, but only accomplished one project: the completion of a half-finished album by Prairie Madness.

"The reason I came back," he explains, "Was that my wife was having a baby, and I didn't want any baby of mine born in New York. But having worked in a record company, I was beginning to get an insight into what sort of things they like and look out for, and I began to think, 'Well, I can do it if that's what they want'.

"I'd be working on some songs but gave up the idea of finding somebody who could write words for me, because they just weren't the words I wanted to sing."

Were the lyrics on the album the first he'd written? "No, but they're the first lyrics that I dared let anybody see. Which may make you wonder what the others were like."

Anyway, Fisher took the time to apply his expertise to Robin Trower's Twice Removed From Yesterday before returning to his own project.

Journey's End features Fisher playing all the keyboards and guitars, as well as producing and arranging - lavishly. On the title track he employs 12 violins, six 'celli, two trumpets, two trombones and two French horns, and has little difficulty making them sound like an enormous orchestra.

"I think I went a bit overboard on the strings and brass. But I learnt quite a lot.

"I don't know whether people will like what I do - I don't like the sound of my voice at all, but I feel I have to write vocals because there's a limit to the statements you can make with an instrumental, although there are three on the LP."

So what next then?

"I've already got some tunes and lyrics for the next album. It'll be less Procol Harumish... or what people think of as Procol Harumish. No one could listen to Robin Trower's LP and say it sounds like them, but they could do with mine ..."

Personally, I think it sounds rather Matthew Fisherish. Each to his ownish. 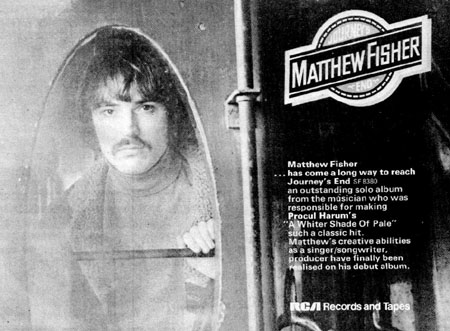 Main album reviews:
At The Rainbow, Focus
Inside Out, John Martyn
Selling England By The Pound, Genesis
No Sweat, Blood Sweat & Tears
Lord Of The Ages, Magna Carta
Angel Clare, Art Garfunkel
The Best Band In The Land, CCS
You Know The Name But Not The Face, Chris Jagger

Matthew Fisher, Journey's End (RCA).
Considering the fact that he's widely regarded as the man who put the pomp in Procol Harum's ramalamadingdong prior to his departure, it is curious that Matthew Fisher's first solo album should be so reticent in subject matter if not in execution.

There is a total absence of epic themes, alliterative abstractions and all the other attributes of grandiose intent, and - apart from Separation, an ornate foray into the land of Bach - little which might recall the renowned Whiter Shade Of Pale, to which his organ playing contributed much of its character.

So what we have then is seven vocal tracks with austerely introspective lyrics; two instrumental interludes and one finale; a predominantly melancholy climate; highly attractive melody lines and some lavish orchestrations.

Fisher himself provides all the keyboard and guitar parts, in addition to arranging and producing, so apart from bass, drums and the occasional harmony, it's virtually a one-man pageant.

He possesses a rather doleful, reedy voice, largely double-tracked to camouflage its deficiencies, but in the same manner as John Cale - another unorthodox talent with whom he shares certain idiosyncrasies - the result is not unattractive.

The material, like its creator, is thoroughly diverse, beginning with the jaunty Suzanne and proceeding to the ambiguously jocular lament Going For A Song which features Fisher's most telling lyrics ("You can put piranha in my swimming pool / Kick me and I just won't feel the pain / Scratch your name all over my Lamborghini / But please don't make me sing that song again") in a tale whose hero's identity is betrayed by a brief flourish from the organ.

Above all, Fisher is a superbly stylish arranger, and if occasionally given to excess, at least it's interesting excess. Marie, an intrinsically banal love song is given considerable scope and conviction by the ingenuity with which the strings and horns soar in and out as required.

And for those for whom there is nothing quite as euphoric as an orchestra in full flight, Fisher withholds the big moment for the title track, and indictment of a former friend on which what sounds like the massed orchestra of the entire population of Patagonia crescendo away until there isn't another note to play, with the French horn in particularly distinguished form.

Journey's End is not a great album, but it deserves more attention than it is likely to receive. An acquired taste worth acquiring, one might say. Al Clark 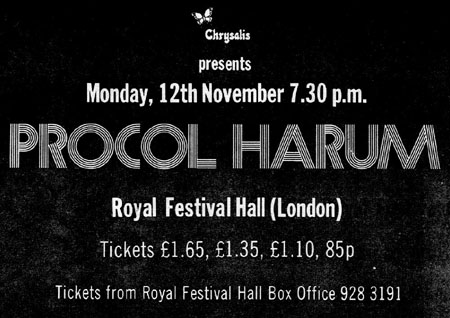 THE GIG WEEK STARTS HERE
Procol Harum commence a rare British concert tour at Stirling University on Friday, and their schedule takes them to London Royal Festival Hall on Monday. 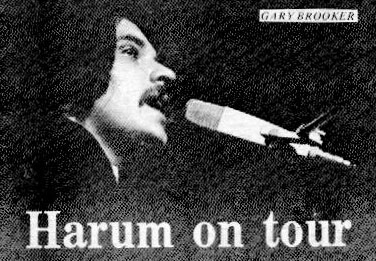 London Royal Festival Hall: Procol Harum.
A tour by Harum is such a rarity as to be an event. So take note that Messrs Gary Brooker & Co. are currently treading the British boards again, albeit for a relatively short itinerary. They opened at Stirling on Friday, and tonight perform within the revered portals of the South Bank's pride and joy. Procol have come a long way since they jumped from obscurity to No 1 with A Whiter Shade Of Pale - their music has evolved and their scope has broadened, admirably fulfilling their function as a bridge between contemporary pop-rock and the classical school.