This third Westside ' ... Plus!' release ... with one freshly-available song, hitherto known only from the crummiest audience-recording! Here's the track-listing and liner notes: it sounds great, and Procoholics may go ahead and order it with confidence.

As Procol were a major headline band in the USA in the late 1960s – topping acts like Santana, The Byrds, Pink Floyd, etc – the group decided to record their third album at the A&M Studio in Los Angeles. This was also the studio of their American label, so the decision was probably financial as well as geographic. Long Gone Geek – the B-side of A Salty Dog, and the only song to survive from that session – was recorded there along with the missing Matthew Fisher instrumental Stoke Poges, and a demo of Wreck Of The Hesperus.

The proceedings ended when Procol secured a booking at Abbey Road in January / February 1969. Home to EMI, owners of Procol's then UK label Regal Zonophone, as well as to The Beatles, the studios had recently acquired eight-track recording facilities that were the best in the world. Procol's Matthew Fisher, who wrote and sang three tracks, produced the album; Ron Richards, Hollies' and former Paramounts' producer, also gets production-credits on the studio tape-boxes for Fisher's three tracks. Abbey Road's engineer genius Ken Scott assisted throughout the album.

The album cover, a clever re-working of the old Player's 'Navy Cut' cigarette packet, was painted by Keith Reid's then girlfriend, Dickinson. When released in the summer of 1969 the album went to US #32, but it failed to score significant sales in the UK until 1972 when it reached UK #27 on its first re-release, on Fly Records.

A Salty Dog was lauded around the globe when released, but sadly a golden opportunity to début the material at a major rock festival in the USA was passed up, allegedly because Procol's guitarist Robin Trower had already booked his summer vacation on the Costa del Sol, or because his wife was expecting their baby, depending which version you believe: the name of this festival was Woodstock! Procol did, however, play the Parliament Hills Free Festival in London, as well as virtually every other major US Rock Festival. Unfortunately, these festivals were not filmed for posterity.

Featuring orchestral backing, the title track is Procol's true masterpiece. Indeed it is considered by many fans to be a better song than A Whiter Shade Of Pale. Matthew Fisher called it Procol's Citizen Kane. The words were inspired by graffiti written in a bar in Boston which read 'Good God skipper, we done run aground'. Artists as diverse as Sarah Brightman, Billy Joel, Jan Akkerman and Marc Almond Dog [sic!] have since covered A Salty Dog.

The Milk Of Human Kindness began life as a honky-tonk styled number: 'She left me for a wasp without a sting', bemoaned lyric-writer Reid. It would be interesting to hear Elvis Costello cover this one!

Too Much Between Us shows Gary Brooker's voice at its most sensitive and displays his versatility as a singer and composer in this Brooker / Trower / Reid acoustic number.

The Devil Came From Kansas came about – according to Keith Reid – 'because I've always liked Randy Newman.' He added, 'I bought his first album, which featured a song called The Beehive State. It had a line about a senator from somewhere. That line inspired the song!' The song was played live by Frankie Miller's first band (from Glasgow) called The Stoics. It also started a life-long friendship between Brooker and Miller.

Boredom was later covered – on an album produced by Matthew Fisher – by the folk duo Tir na Nog [sic], who still gig in London to this very day; by Tea and Symphony; and by Mitch Ryder on The Detroit-Memphis Experiment.

Juicy John Pink was recorded at The Rolling Stones' old rehearsal rooms in Bermondsey, south London. It was engineered by The Stones' number-one piano man, the late Ian Stuart. This twelve-bar blues was Robin Trower's first composition for Procol Harum.

The Wreck Of The Hesperus was written and sung by Matthew Fisher, with nearly every band instrument played by him too! This was Procol's second number to feature full orchestral accompaniment. It was performed at the Stratford Festival in Canada in 1969, when Procol were backed by the Festival Orchestra. Further 'live' orchestral excursions would ensue between 1971 and 1973.

All This And More was later re-recorded Live In Concert With The Edmonton Symphony Orchestra – along with A Salty Dog – in 1971 (now available as a French CD import, Chrysalis CDP 32 1004 2). This version features great piano-playing from Gary Brooker. George Harrison was impressed both by the song and by Procol Harum; one year later he asked Gary to play piano on his All Things Must Pass triple album.

Crucifiction Lane features Robin Trower on vocals as well as guitar in this Trower / Reid composition. When Trower embarked on his solo career in 1972, he refrained from singing!

Pilgrim's Progress – according to Matthew Fisher – had a melody written for it by both Gary Brooker and Robin Trower, but Keith Reid rejected both versions! The Fisher setting has hymn-like qualities which surpassed previous attempts. Fisher sings and plays virtually everything on this track. According to Gary Brooker, more time went into the production of this song than did [sic] any other on the album. 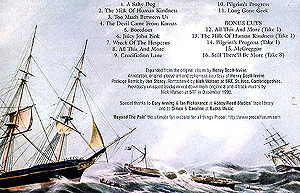 Bonus Cuts
Thanks to some diligent archival trawling by Ian Pickavance and Cary Anning at Abbey Road Studios' tape-library, not to mention the location and retrieval of a long-thought-lost master-tape by the good people at Cube Records, we are delighted to be able to complement our single CD re-issue of A Salty Dog with a selection of bonus tracks, the majority of which are receiving their world premiere release here ...

Long Gone Geek
The B-side to A Salty Dog, about a gun-toting tabby-cat, no less: someone even shout [sic] 'Procol Harum' – the name of a famous pedigree cat – in the background! It was recorded in Los Angeles. This is the final mixed master in its original mono state.

All This And More
The previously-unissued Take #1, recorded 4/2/69 and mixed down from the original 8-track master-tape (as were all the bonus tracks except Long Gone Geek) by Nick Watson at Sound Recording Technology Studios, St Ives, Cambridgeshire on December 16th and 17th 1998.

McGreggor
Produced by Denny Cordell and recorded 10/7/68. This is an unreleased performance, mixed down from the original four-track tape, that was originally intended to be included on the Shine On Brightly album. Brooker's vocal on this track is merely there to guide the group as they work out the song in the studio, and is obviously not representative of how any finished version of this track would have sounded. It is, however, the only surviving take of McGreggor to feature any kind of vocal performance, and as such the historical importance of the whole outweighs the technical imperfections of any of its parts!

Still There'll Be More
An alternate mix of Take 8, recorded for and used on the Home album. This Brooker – Reid composition features Chris Copping on organ and bass guitar and was produced at Abbey Road Studios, by Chris Thomas, on 14/2/70.

... further previously-unheard delights await all Procol fans on the '... plus!' edition of Home (WESM 535) available on Westside from May 1999!