Do it, you'll love Gary

In Record Collector November 1998 Peter Doggett wrote an article about Bill Wyman and the Rhythm Kings. A couple of clips from this article will interest the Palers.

Bill Wyman on Peter Frampton
"He seems to treat me like his mentor, or his uncle: he rings me up and says, 'I've been offered this gig with Ringo, what do you think? Should I take it?' I said: 'Who's in the band?'. He said, 'Gary Brooker', and I said, 'Do it, you'll love Gary, Ringo's fine, and the money will be alright."

And on Gary Brooker
Gary Brooker is another occasional Rhythm King whom Wyman has known since the start of his career: "I met Gary before I joined the Stones, so I go back further with him than I do with Mick and Keith. The Cliftons played with his band, the Paramounts, at Greenwich Town Hall late in '61 and early '62, and we got on great, because we were playing the same kind of music they were. They were doing things like Putty In Your Hands and all the Olympics' songs like Western Movies - black R&B which wasn't as poppy as we were doing, which was black rock'n'roll. So we had a long chat that night, and stayed friends. Then when the Stones started doing ballrooms and our own tours, we invited the Paramounts along. Years later, they became Procol Harum.

And here's a brief magazine feature from later on ... 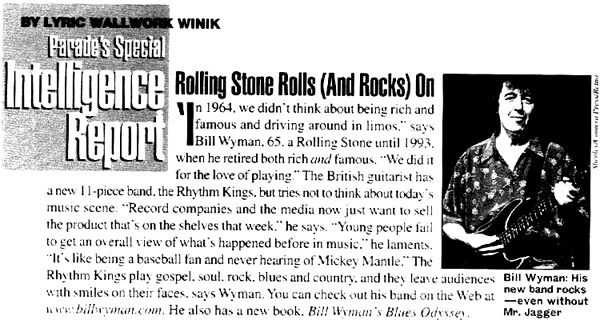 More on the Rhythm Kings