Added the seventh instalment in this Winterval's Procol puzzles.

Check the updated list of prizes ... which one do you most desire?

Prize update! We've added two new and excellent items to the list of this season's puzzle-prizes, thanks to the generosity of Procol Harum (thanks, Gary, Geoff, Geoff, Josh and Matt)

Added the sixth instalment in this Winterval's Procol puzzles.

Remember that the selections make use of Salvo bonus-tracks as well as the original tracks you had on vinyl!

Added the fifth instalment in this Winterval's Procol puzzles

Added the fourth instalment in this Winterval's Procol puzzles.

Added the third  instalment in this Winterval's Procol puzzles.

Remember to consider the tracks that feature on the two Salvo compilations, as well as having been reissued on their parent albums

Recommended pastime for the holidays: why not visit Henry Scott-Irvine's website and listen to some of his radio shows? (thanks, Henry)

Added the second instalment in this Winterval's Procol puzzles.

Remember that each day there are just three clips, familiar or not.

Index-page for rare Procol Harum words is here, and may be helpful.

Added the first instalment in this Winterval's Procol puzzles.

You can all have a go at the puzzles this year as they're a lot of fun, pretty easy, and the prizes are well worth having

Added a page about how to play in this year's BtP Christmas Puzzles, with an example and full explanation of what's in store (thanks, Ron)

Added a page revealing the salivatory Procol prizes that all visitors to this site can choose from, and hope to win in our forthcoming season of Christmas Conundrums (thanks, all)

Added some more excellent photographs from Finland  (thanks, Pekka)

Added some excellent photographs from Finland (thanks, Pekka)

Added a Fillmore ticket to the 1995 collection and a concert memoir here (thanks, Joe)

Added a link to a page of possible interest to some (thanks, Bradshaw)

'Ninth was a welcome change from the sound of Grand Hotel and its follow-up. I still consider these records the worst they ever made ...'

Added a provocative reappraisal of Procol's Ninth (thanks, Fred)

Added a page depicting the tee-shirt from the 2003 US East-coast tour ('Sold out'!) ... more Procol Harum tee-shirt snaps are welcome, of course: click here

Added brief news of a novel featuring A Whiter Shade of Pale (thanks, Esther)

Added another Procol engagement from 2009 to this index, and a picture page (including good video link that may not last for long) (thanks, Charlie)

Added a review of Procol Harum's fine fourth album, in its Salvo re-mastered version (thanks, all)

' ... as great a launch-pad into the world of Procol Harum as a perspective-shifting device for the well-versed ...'

Added another excellent review of the Procol box-set ... still the best Christmas present you can think of (thanks, Dmitry)

'Actually both the record and the tape originate from Belgium ...'

Added an interesting codicil to the Whoosh page (thanks, Fred) 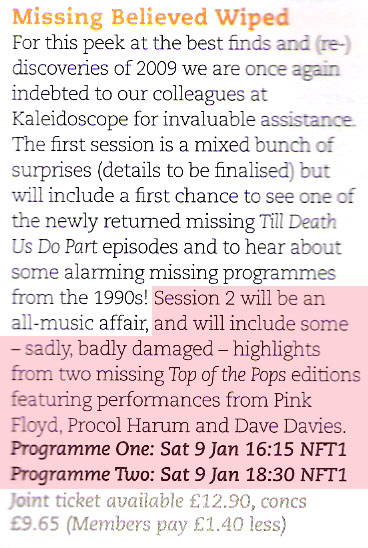 Added two more scans to the Whoosh page (thanks, Marc)

'... the band that could never be surpassed when it came to this sort of thing. Not by Queen, ELO or anybody.  ...'

Added a review of Procol Harum's seventh album, in its Salvo re-mastered version (thanks, Abi and others)

'... A Salty Dog takes what had gone before, scrubs down its deck, hoists its mainsail and splices the mainbrace in celebration ...'

Added a review of Procol Harum's third album, in its Salvo re-mastered version (thanks, Elwood)

For a long while the BtP Store has been selling the remaining stock of full-colour 'Salty Dog' tee-shirts made by John Grayson of Shine On. The large sizes sold out last year, and now there are just two or three shirts left, in Medium, with no plans to make any more. 'Yours if you want them'.

For the larger fan of Procol music, there are XL and/or XXL tee-shirts here and here

Added some action shots of Robin Trower in California (thanks, One-Eye)

Added an annotated setlist and some 24th-row photos about Procol Harum in St Petersburg (thanks, Alexander)

'... the magnificence of their sound coupled with the sheer power of Gary Brooker’s blue-eyed-soul ... a stunning showcase ... a band always ahead of their game ...'

Added a review of Procol Harum's sixth album, in its Salvo re-mastered version (thanks, Abi)

The UK's favourite Radio 4 comedy show (series 52 episode 3) made striking use of A Whiter Shade of Pale yesterday evening. Click here and (if you haven't time to listen to the whole episode) advance the slider to 8.22, which will bring you in the middle of the game 'One Song to the Tune of Another' ... David Mitchell (not the novelist) entertains. The link should be active for about a week.