All of us Palers have been anxious waiting for this CD with the last recordings the Westsiders scraped out of the Cube and Abbey Road vaults.

It takes less than three quarters of an hour, this one, and on top of that it is the most expensive of the Procol re-issues. Again there is (I am sorry to say) that stereo version of AWSoP. They better had put some more takes of the title song or of those of which even GB couldn't tell the difference compared to the already released ones. 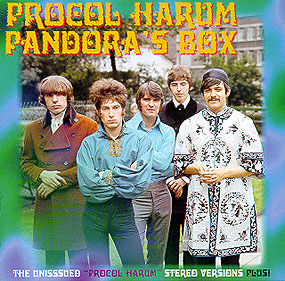 On the front there is a picture of Procol Harum with Royer and Harrison while most of the takes are with Robin and BJ. This doesn't seem the right thing to do. They shouldn't have paid so much money for this picture. Don't expect new interpretations of the songs so familiar to all of us. Don't expect them to sound better; they sound different, that they do.

The concert starts with Conquistador, it is a bit different from the version that is so familiar to all those PH fans from the first moment. It is followed by Something Following Me, Cerdes and Kaleidoscope. All three of them are excellent. They sound a bit like a live version, with here and there an enthusiastic yell from one of the band-members, I think. But every now and then in the mix, the bass and drums are a bit thick.

Sometimes it can get unpleasant, as it happens in this version of Repent Walpurgis. In the Ave Maria (I prefer to refer to that Bach / Gounod version of this Church melody) part of the song the bass keeps on playing, but it distorts that beautiful duet of piano and organ. In the longer version it is even worse, there is also the rhythm guitar audible and all the loveliness of the duet is gone. This longer version is closer to the live versions I have heard for the first part of the "song", but the speciality is that the Ave Maria part is played twice. I think that neither version can stand up to the version on the monaural first album. In the longer version that is due to Robin's guitar playing. It doesn't sound as effective as his playing normally does. The licks are a bit uninspired and sometime out of place, that is perhaps why another version made the album. On the other hand, there is also a part in which Robin on his guitar represents the strings of the orchestra playing pizzicato, and this sounds great.

Great fun it is hearing Pandora's Box. If you hum the words with it, you can imagine how good a song this was in those early days although it was rejected from appearing on one of the Regal Zonophone albums. But best of all is the guitar intro, which later on became the marimba intro.

One wonders why these rejected songs from the first years keep creeping up on later albums in the Chrysalis period, Monsieur Armand is definitely better than the Exotic Birds and Fruit version Monsieur R. Monde. And this Pandora's Box is far more an original than the version on Ninth. Perhaps the answer lies in Without a Doubt and Typewriter Torment.

Still there'll be more to enjoy: The Gospel According to Matthew is one to be enjoyed thoroughly. The vocal part by Robin is much more distinct and adds to the bluesy character. And I think the organ is sounding better than on the Shine on Brightly album: like Robin's vocal, it is more distinct and I think this is one of the finest organ parts that Matthew played on a record while in Procol Harum. What I like in this song is, that the organ is in contrast with the blues of Gary and Robin. It is as poetic as can be.

Another problem with this issue is tape-hiss; there are so many systems on the market to suppress tape noise. The people at Westside should have made use of these techniques; one expects that the tape hiss should have been reduced to an acceptable level, especially with a CD at this price.

Maybe, they should have asked one of the original Procol Harum members to supervise the mixing of the tape. I wonder what would have happened if Gary or Matthew would have been involved in this ... Plus! project. I think that we should have seen and heard less of the older takes, but it would have an "autobiographical" issue.

And as for the question: should you buy it? Yes, but don't expect to much. If we only knew that Gary, Matthew, Robin, David and BJ's family would profit by it, we should certainly buy this one. My advice is: Listen before you buy.

And this one is for Robin's fans: Bridge of Sighs is now re-issued in a 24-bit remaster version by Chrysalis / Capitol, with some live versions of the same album added: it is sounding fabulous and it is cheap! Now we have to wait till the first 24-bit remasters of Procol will see the light of day. Starting of with Grand Hotel maybe and some live versions of that album.