Procol: The Heron, the Worm and the Tree 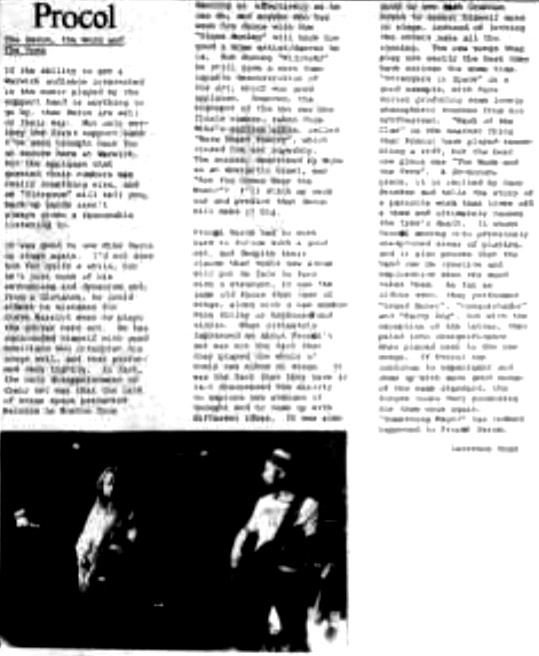 If the ability to get a Warwick audience interested in the music played by the support band is anything to go by, then Heron are well on their way. Not only were they the first support band I've seen brought back for an encore here at Warwick, the applause that greeted the numbers was really something else, and as Ultravox will tell you, back-up bands aren't always given a favourable listening to.

It was good to see Mike Heron on stage again. I've not seen him for quite a while, but he's lost none of his enthusiasm and dynamism and, from a distance, he could almost be mistaken for Steve Marriot when he plays the guitar hero act. He has surrounded himself with good musicians to interpret his songs well, and they performed very tightly.

In fact, the only disappointment of the set was that the lack of stage base prevented Malcolm Le Maistre from dancing as effectively as he can do, and anyone who has seen him dance with the Stone Monkey will know how good a mine artist/dancer he is. But during Nijinsky he still gave a more than capable demonstration of his art, which won good applause. However, the high spot of the set was the final a number, taken from Mike’s earlier album, called

Warm Heart Pastry, which close the set superbly. The encore, described by Mike as an energetic brawl, was Are You Gonna Hear the Music? I'll stick my neck out and predict that Heron will make it big.

Procol Harum had to work hard to follow such a good set, and despite their claim that their new album will put me face to face with a stranger, it was the same old faces that came on stage, along with a new member Pete Solley on keyboards and violin.

What ultimately impressed me about Procol’s set was not the fact that they played the whole of their new album on stage. It was the fact that they have at last discovered the ability to explore new avenues of thought and to come up with different ideas. It was also good to see Mick Grabham begin to assert himself more on stage, instead of letting the others make the running.

The new songs they play are easily the best they have written for some time. Strangers in Space is a good example, with Pete Solley producing some lovely atmospheric touches from his synthesiser. Mark of the Claw is the nearest thing that Procul [sic] have played resembling a riff, but the best new piece was The Worm and the Tree.

A twenty-minute piece, it is recited by Gary Brooker and tells the story of a parasitic worm that lives off a tree and ultimately causes the tree’s death. It shows Procol moving into previously unexplored area of playing, and it proves that the band can be creative and explorative when the mood takes them.

As far as oldies went, they performed Grand Hotel, Conquistador and Salty Dog, but with the exception of the latter, they paled into insignificance when placed next to the new songs.

If Procul [sic] can continue to experiment and come up with more good songs of the same standard, the future looks very promising for them once again. Something Magic has indeed happened to Procol Harum.