Gary Brooker gives a brief introduction to this song, to camera, from his home studio, as part of the Cherry Red Records 'Artist of the Month' promotion in July 2020. 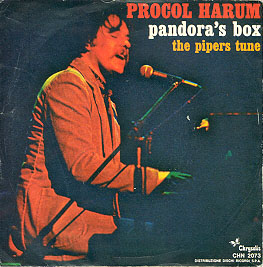 What sort of expectations was the title, Procol's Ninth, intended to set up? That the music could stand up alongside that of Beethoven, Schubert, Mahler, who had all written nine symphonies? Or, again by analogy with these composers, that Brooker and Reid were not going to write any more?

The album was preceded by a single, Pandora's Box (CHS 2073, backed with The Piper's Tune) in July 1975 in the UK. Heavily featuring tuned percussion and flute, the song seemed a radical departure to die-hard fans of the band's five-piece sound, and perhaps a portent of highly-arranged songs to come. Melody Maker's review (2 August 1975) included: 'One to play when you’re watching a telly programme and the sound has been turned down. Miss.' (In early 2001 the instrumental passages played in the background as the BBC's legendary children's programme Blue Peter explored beneficial scientific applications of maggots – they obviously didn't know Dead Man's Dream!). But it was not a miss: the record-buying UK public took it to a convincing No 16, and it was performed, among other shows, on Top of the Pops and on The Geordie Scene. Sprightly and hummable, it is certainly the poppiest of all the Procol singles – a far cry from the Beethovenesque album-title. The album press-kit, however, saw it differently: an 'ominous cut in the tradition of Whaling Stories and Fires (Which Burnt Brightly)'! As a tour-tie in the single (and album) were also released in Eastern Europe; the same coupling was released in the USA – the promo single contained mono and stereo versions edited by 18 seconds to 3:18 – but it sold less well there.

And what sort of expectations did the title, Pandora's Box, set up? The UK media like to use the phrase in political and sporting reports, usually where 'can of worms' would do: "this opens up a real Pandora's Box". From the point of view of mythology, however, a 'Pandora's Box' is a present that seems valuable, but turns out to be a nuisance, even a curse. Pandora means 'all-gifted'; she was the first woman, and her dowry included a jar (erroneously commuted to 'box', in many re-tellings) given to her by Jupiter, which contained all the world's sorrows. She presented this to her husband, who opened it, against all advice, and the sorrows escaped: some versions say that only Hope remained (how prophetic for Procol Harum's last hit single!). The highly miscellaneous stream of images in the song, many of which reflect insecurities and problems, might be taken to represent the escaping sorrows from the box. It's a title like Boredom and Rambling On, seemingly designed both to describe the content and to pre-empt criticism of its nature.

The 'all-gifted' title might seem also to tally with the disc's exotic instrumentation: as well as the percussion we hear acoustic guitar, several strata of high synthesiser, layers of orchestral texture, and brass for Handel's entrance; electric piano is well-back in the mix, the Grabham guitar makes a very brief appearance with lots of flange on it, and Copping's characteristically hectic organ break comes only toward the fade-out. But in fact the title existed long before Leiber and Stoller got to grips with the song. It's a very unusual Procol number in that we have three distinct versions to consider, grub, pupa and the imago that finally winged into the charts.

The first version dates from Regal Zonophone days, and was released (incomplete, without vocal) in a contemporary stereo mix as the title track of 1998's final Westside trawl of the vaults, apparently in response to fan pressure. We cannot know what the vocal melody would have been like, nor the words; but the harmonic structure of the song is precisely the same as the famous single, albeit played in a far more languid fashion. Matthew Fisher (quoted in Then Play On - Michael Ober, 1992) said, 'We actually did Pandora's Box for the first album. I couldn't even remember recording it at the time because I was so stoned … '; on the other hand Gary Brooker said, in a 1984 Danish interview, 'Pandora’s Box was written very early, maybe even before we got the band together …we didn’t record it then.' The song presents a repeating three-chord cycle in A minor, developing through F and G, slipping up a semitone and back into A minor for the end of the third phrase; oddly, the fourth phrase starts on the same chord. The refrain toys with the sub-dominant, its semitonal descent a little reminiscent of the Strangers in Space chords. This early version starts with a highly-saturated guitar line, repeating the notes c, b, g sharp and a, right through the entire verse: this droning motif neatly fits the harmonies of the third phrase as well as the rest of the verse, but the effect of the repetition is perhaps a bit deadening. The other abandoned strong feature is a fanciful glissando in the chorus-section, very characteristic of the Fisher of A Whiter Shade of Pale, Skip Softly (My Moonbeams) and so on (mp3 here).

The song next emerges in a stage medley with the ultimate Procol rarity, A Robe of Silk, and Piggy Pig Pig in April 1973 at the Felt Forum; again guitar starts it, but the approach could scarcely be more different, as Mick Grabham is in Cochise country-mode (mp3 here); the song still comes to dead halts between the verses but it has a chugging back beat and much cow-bell work from BJ. It is not until the 1975 single that the instantly-recognisable marimba-motif emerges: As Keith Reid explains in a 1975 UK interview on Procol’s Ninth: 'Jerry Leiber said, "Have you got a song that we haven’t heard?" So we played him Pandora’s Box, which is a song that we’ve always liked but which for some reason we never got round to do it. They liked that and they took it over. Transformed it completely." (1975 UK interview on Procol’s Ninth).

Leiber and Stoller, perhaps picking up the 'Spanish Main' reference, also came up with what the Press-kit was pleased to call the ' … Gothic-calypso. A light samba beat … alternated with a wailing, bluesy chorus to produce a startling Latin effect'. Gary Brooker has played with this idea in performance, introducing the song as 'one Peggy Lee had a hit with in Venezuela' and inserting pseudo-Hispanic mannerisms such as off-mic shouts of 'ariba ariba'. However the producers also added the flute solo (Reid: 'It was their idea to put a marimba on. They made that song into a hit ... They put the flute solo on, they did the overdub (Danish interview, February 2, 1984)). Devotees of Procol’s five-piece sound wondered why the new producers had ceded the stand-out instrumental break to an anonymous New York session flautist (an intrusion comparable to Harry Pitch's harmonica solo on Your Own Choice); but Leiber & Stoller’s hitman ears (maybe recalling the catchy woodwinds in Nina Rossi’s Untrue Unfaithful hit from 1965, a melodic cousin of the Procol tune) were vindicated. When miming to the song on Top of the Pops, Chris Copping stood at the marimba Brooker had played on record; and in live situations he played the flute line, or something like it, from a piercing synth perched atop his Hammond.

Completing the evolution of this Protean number, Nicholas Dodd orchestrated it for The Symphonic Music (1995) with a 'Sugar Plum Fairy' woodwind introduction complete with rain-sticks. The melody was entirely played by James Galway, 'the man with the Golden flute', in an overdub studio in Japan: the flute-break from the record was taken by the trumpet (as it was by the Palers' Band in Guildford 2000), and the marimba makes a token appearance 30 seconds from the end. Yet when this arrangement was played live at the Barbican, Gary sang it in the usual way: no other Procol Harum song has done official duty both as a vocal and as an instrumental piece

As if to prove that (as Gary told a Danish interviewer in 1983) it was '… by far the best song on Procol’s Ninth' Pandora's Box was played (quite unlike all other Ninth songs!) at every gig between August 1975 and May 1977. By the final tour it had acquired an excitingly ostentatious, protracted chordal solo from Peter Solley, and blues hollerings from the composer … 'talking 'bout a maaaa-rble …'. It has been frequently heard in the 1990s, where the setlist has of course increasingly resembled a 'greatest-hits' roster. The words, which Keith Reid selected for his book, My Own Choice], are perhaps too diffuse to have attracted many cover versions: there are other songs of this title but most – including Donna Summer's, pace Mr Brooker – are different compositions. There are of course many works of this title outside the world of rock: Swedish composer Lars Johan Werle's Pandora's Box opened at the Opera of Jutland in May 2000; Keith Reid is known to be a devotee of classic cinema, and he may have known the German 1929 film Pandora's Box (Der Buchse der Pandora aka Lulu) starring Louise Brooks, and based on the plays from plays Endgeist (1895) and Pandora's Box (1903) by Wedekind: in this a woman murders her lover, becomes a prostitute and is murdered in London by Jack the Ripper. However it seems most unlikely that the present song relies in any way on the low US slang in which 'box' means 'vagina'.