As Strong as Samson

Gary Brooker gives a brief introduction to this song, to camera, from his home studio, as part of the Cherry Red Records 'Artist of the Month' promotion in July 2020.

It might be argued that the shade of Dylan, which hung heavy over the early Procol albums, walks again in the political-critical lyric and slightly countrified music that constitute As Strong as Samson. One could imagine the Dylan of Tangled up in Blue making a good stab at the verses, though the see-sawing, hymnal melody at the end of the chorus presents a contour that would deter many a vocal mountaineer.

It's a strongly-constructed common-time tune in the ballad-key of D, starting with a fluent piano introduction which, unusually, is not simply the same as the accompaniment to the melody that then comes in. The whole piece is written in what we might call Gary Brooker's 'naïve' style, led by the tune, rather than by the chords: these are not conventional (we visit C major at the end of the third phrase of the verse) but they do not present any aural shocks either; the chorus has a traditional Procol feel when the strong mediant major resounds at the start of the second line. It's unusual in Procol terms for the verse-lines to start with minor chords (chiefly the relative minor) but the formula of delaying a dominant until the very end of the verse, and starting the chorus on a subdominant, is exactly shared by The Idol, the album's following track. However Samson has a genuinely hummable chorus, its end joyously reminiscent of childhood hymn-tunes, whereas the chorus of The Idol has three lines that constantly seem to be sagging back to the tonic. The last repetition of the Samson chorus, with the vocal commuted to a descant, harks back to the transformed organ-melody at the very end of A Whiter Shade of Pale … one of that record's innumerable, classic felicities.

As Gary Brooker said in a 1975 UK interview about Exotic Birds and Fruit, 'It’s a set of lyrics of our time very much. I suppose there’s a little bit of industrial dispute, a little bit of malintention, whatever else is going on.' Not until Holding On would Brooker and Reid again write so openly about matters that were in the news. The 'labour-relations' verse deals with matters that specifically impinged on the band during Prime Minister Heath's 'winter of discontent' (which we discuss in detail in the notes on Butterfly Boys); the 'famine' verse deals with the differential between the starving and those who watch their suffering on television; and the 'Arab/Israeli' verse deals not in political insight so much as in the fear that this war is the thin end of the wedge of a catastrophic global conflict. The tone is somewhat reminiscent of Dylan's Masters of War, and rather more so of Blowing in the Wind (1962), since resignation, rather than anger, is the principal tone.

The instrumental playing sees the whole band on excellent form. From the very outset BJ Wilson flourishes and decorates at the drums as if this is a piece that he absolutely loves – the same relish is heard from him on the BBC Live CD, when the rest of the band sound less-committed. Organ and strummed acoustic guitars give a warmth to the soundscape and we gradually become aware of the presence of an unprecedented participant in Procoldom, the pedal steel guitar. 'We had a guest musician on this one, well we sent him a cheque as well,' said Gary in the 1975 Exotic Birds interview. 'BJ Cole …he used to play with Mick Grabham in a group called Cochise some time ago. He added a lot of atmosphere to this one. Everybody played very great on this … Chris Copping got a fine little organ solo, really fitted in there nicely.' Though Chris Thomas's work on this album is much-criticised by audiophiles, he does pull off a successful balancing act, ensuring that Cole and Copping don’t tread on each other's musical toes; pedal-steel often occupies the same tonal range as the organ. There is no lead guitar audible on the record, but Grabham certainly plays some inventive fill-in lead in contemporary live performances (mp3 here). It's unfortunate that the words 'when you're being held to ransom' are not very easy to hear: this is partly because they are so entirely unexpected. Without them the pungency of the lyric is compromised, and when the song came out as a single the title grew a parenthesis to make the words plain (so, curiously, this album has two tracks with variant titles, the other being Monsieur R Monde).

So, what of the title? Samson is one of the best-known Old Testament Biblical characters. He was last of the twelve Judges of Israel, and some allege that he represents the sun/light/day, and Delilah the night: the pair thus make up a good-and-evil partnership. 'Samson' comes from the Hebrew 'Shimson', a diminutive of 'Shemesh' meaning sun: the locks of his hair are said to be the rays of the sun. 'Delilah' means 'delight' in Hebrew yet some trace it to an Arabic word meaning 'to flirt'; thus in a sense Samson and Delilah epitomise the Arabs and Jews mentioned in the song. Samson's story has been frequently taken up by song-writers: Reid is the only one not to have involved the temptress Delilah, with whose faithlessness Samson's fate is so intimately bound up. One of the earliest versions is Rev Gary Davis's Sampson and Delila, possibly written by Blind Willie Johnson; Samson and Delilah was a hit for Middle of the Road 1972, and Bad Manners in 1982; both characters are mentioned in the Bruce Springsteen song Fire. Delilah was commemorated in the 1968 hit single by Tom Jones, reworked in 1975 by the Sensational Alex Harvey Band. Samson et Dalila is the opera by Saint-Saëns, with a French libretto by Lemaire, first produced in Weimar 1877; Samson and Delilah is the ludicrous 1949 de Mille epic film starring Victor Mature. The name Samson has become a by-word for a man of prodigious physical strength. The name 'the British Samson' was given to Thomas Topham, a London carpenter, who stabbed his wife and then killed himself in 1769. Richard Joy, 'the Kentish Samson' died aged 67 in 1742. 'Samson' is also the name of a make of military tank, and is mid-nineteenth century slang for a potent cocktail of brandy and cider.

The Samson story is found in Judges 13-16. He reportedly killed one thousand Philistines, using the jawbone of an ass (the 'ass's jawbone' today is a percussion instrument, used on Nothing But the Truth); but he was unable to resist the blandishments of a Philistine woman, Delilah, who seduced him into cutting off his hair (the source of his strength) and delivered him to the Philistines, who blinded him. 'Eyeless in Gaza' as John Milton depicted him in the brilliant verse-drama Samson Agonistes, Samson's strength was renewed by the Jewish God, in whom he never lost faith, for one last effort in pulling down the Philistines' temple – in which crush he lost his life. Judges is the part of the Bible in which the most lurid tales are to be found: many of these (concerning kleptomania, gynosadism and the tale of the four hundred virgins) were pruned from later translations. Interpretations of the Samson tale are twofold: some contend that it retreads Eve / Pandora territory, showing how the world is brought to naught by temptations of the flesh and the wiles of women; others view Samson as an emblem of the weakness of the people of Israel, who quail easily and precipitate their own downfall. With the background of the Arab-Israeli war informing the final verse, Samson is an aptly-chosen peg for this song to hang upon, but Reid seems to have intended a general look at the rottenness of the world, rather than a narrowly political one, as these contrasting quotations indicate: 'As Strong As Samson is about the Arab-Israeli confrontation and the general state of things, politics and so on: as profound as you care to take it.' (Streetlife, 15 May 1976); and 'I wrote that at the time around Watergate.' (Danish interview, 2 February 1984). It was one of the songs he selected for his book, My Own Choice. 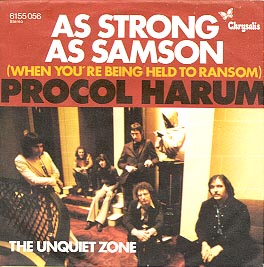 'We did want it out as a single at the time,' said Gary in a 1975 interview. 'We got very involved in thinking like that. Until one day we decided to time it. We found out it’s about five and a half minutes long. So that was the end of that. It wasn’t the end of the song.' Indeed it was not: edited from 5:05 to 3:46, As Strong As Samson (When You’re Being Held To Ransom) / The Unquiet Zone (CHS 2084) was released as a single in January 1976 in the UK, after the release of the following album, Procol's Ninth. The remixed version puts BJ Cole’s pedal-steel much more to the fore, and the acoustic guitar as well, but it failed to follow Pandora's Box into the charts.

The song was probably first played live during the eight-date UK university tour that started 28 February 1974 at Exeter University. It was definitely heard at Golders Green Hippodrome, 22 March 1974, which became the BBC Live CD, and it was also part of the setlist during the month-long USA tour (April–May 1974) when the political background needed explanation: mp3 here. Of course it popped up again during tours early in 1976, to promote the single.

It's perhaps curious that the song was not brought into the repertoire of the Gary Brooker Ensemble for the church concerts, but it did resurface with the New Testament Procol on the Jethro Tull 1993 tour. Sadly for many fans (some regard this as their No 1 Procol track!) it was in a light-weight version: gone was the piano introduction, gone the solidity of the treatment: imported, in their stead, were cod-reggae stylings, soul-man enquiries as to the audience's well-being, and exhortations at the end to join in the cycling iteration of the final line of the chorus (mp3 here). It seemed understandable when Procol reggaed-up Boredom, since that was always an ethnic novelty number: but it poses a real problem for the faithful fan when the beloved band itself perpetrates a cover version which, if by another artist, would be berated for its insensitivity.

This new version does not exist in any official recording, but it has been much heard; it was almost always introduced with some patter about how the world had not changed in the last twenty years, and by August 1995 it had acquired a scripted ad-lib update: 'Black men and white men / And Croats and Serbs / Causing congestion / And changing the words ...' which Brooker told BtP was not Reid-sanctioned but was 'just me being a wise-guy'. The last time the band performed it was in February 1996 at Vejle, Denmark; and when Gary Brooker played the song, solo, at the request of Douglas Adams in December 1999, it had mercifully reverted to its original form.